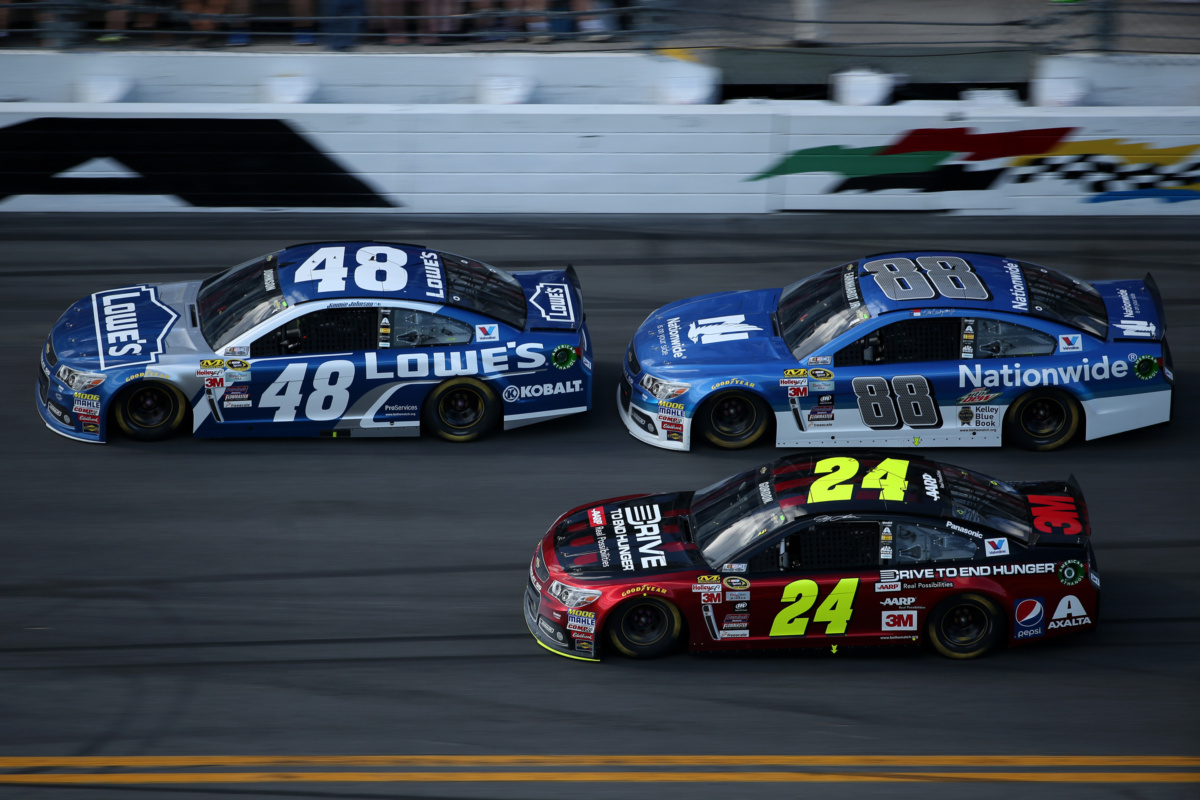 DAYTONA BEACH, Fla. – In one of the most thrilling Daytona 500s in recent memory, Hendrick Motorsports drivers led a total of 158 laps and secured three top-10 finishes – including two top-five results.

Dale Earnhardt Jr., the defending champion of the Great American Race, led the organization's four drivers to the checkered flag, finishing third. Just behind him was Jimmie Johnson – who led 39 laps – in fifth place. Kasey Kahne was next with a ninth-place finish, his third career top-10 in the Daytona 500.

Jeff Gordon, who led a race-high 87 laps and moved into sixth in all-time laps led in the Daytona 500, was involved in a multi-car incident on the final lap of the race and came away with a 33rd-place result.

Below is a detailed look at how the Great American Race – which included thrilling, three-wide racing with less than 10 laps remaining in addition to a green-white-checkered finish – played out for all four Hendrick Motorsports drivers.

KASEY KAHNE, NO. 5 FARMERS INSURANCE CHEVROLET SS
FINISHED: 9th
STANDINGS: 9th
RECAP: Starting from the 13th position, Kahne fell back to 18th but was back to his original position by Lap 5. He remained just outside the top 10 up to the first caution at Lap 18, and returned to the track once again in 13th. At Lap 26, he cracked the top 10 for the first time, and headed to pit road for the second caution flag of the day in 10th. By Lap 58, however, Kahne had battled all the way to third place. He shuffled between third, fourth and fifth position until green-flag pit stops began at Lap 87. After taking four tires on pit road, Kahne found himself in second as the field shuffled through their pit stops at Lap 90. That's where he remained until the next caution flag flew for debris at Lap 106 ended the long green-flag run. When the green flag waved with 90 laps to go, Kahne was battling for third place, but fell outside of the top 10. He continued to run just inside of the top 10 until the next round of green-flag pit stops, and Kahne entered pit road with 49 laps to go for four tires. When the field cycled through the stops, Kahne found himself in 22nd. But after another caution, Kahne was back in the top 15 with 35 laps to go. The top 10 eluded Kahne until some speedy racing using the inside lane got the driver of the No. 5 Farmers Insurance Chevrolet SS all the way up to fourth with 12 laps to go. During some intense, three-wide racing, Kahne continuing driving as high as fourth, but when the sixth caution flag of the day waved with three laps to go – and ultimately resulted in a red flag – Kahne found himself in seventh for the green-white-checkered attempt. He ultimately secured a top-10 result, finishing ninth.

JEFF GORDON, NO. 24 DRIVE TO END HUNGER CHEVROLET SS
FINISHED: 33rd
STANDINGS: 30th
RECAP: The first lap led in Gordon's career came in the 1993 Daytona 500 – and in his final full-time Sprint Cup Series season, Gordon led the first lap of the 2015 Daytona 500. Though he lost the lead to teammate Johnson Lap 2, he regained it on Lap 14, and went on to lead the most laps of any Daytona 500 in his career. His previous high was 61 in the 1995 Great American Race. This year, he led 87 to secure the bonus point for most laps led. Gordon was dominant in the first half of the race, holding off competitors on the track and on pit road. He won the race back to the track off of pit road in both of the cautions in the first half of the race, and even maintained his lead in the race after the field cycled through green-flag pit stops that began at Lap 87. He led at the halfway point of the race, and after the third caution flag of the event waved at Lap 106, he continued to battle for the lead but lost it with just under 90 laps remaining. Though he was shuffled back in the pack, he continued to run in the top 10, finding himself back in the top five just 10 laps later. Gordon headed to pit road for a green-flag stop, taking four tires with 48 laps remaining in the race, and when the field cycled through their stops, Gordon was in seventh place. When another caution flag waved with 40 laps to go, Gordon headed to pit road for just fuel, and restarted in sixth position with 35 laps to go. He fell outside of the top 10, but following yet another caution, Gordon kept pushing toward the front with less than 20 laps remaining. Thrilling, three-wide racing found Gordon in the middle row, looking to help Johnson find his way into the race lead. He fought as high as the top five but when the sixth caution of the day waved with three laps to go, Gordon was lined up to restart in ninth for the green-white-checkered attempt. On the final lap of the race, Gordon was involved in a multi-car incident, causing him to fall from 13th position to a 33rd-place finish.

JIMMIE JOHNSON, NO. 48 LOWE'S CHEVROLET SS
FINISHED: 5th
STANDINGS: 5th
RECAP: Starting on the outside pole, Johnson took the lead from Gordon on Lap 2 of the 500-mile race. That's where he remained until Lap 14, when Gordon regained the lead. Johnson had led 12 consecutive laps, and after losing the lead continued to run in the top 10 until Lap 40, when he found his way back into the top five just in time for the second caution flag of the race. In the long green-flag stretch that followed, however, Johnson was shuffled farther back in the pack, finding his way to 18th before beginning to drive back toward the front. At Lap 73, he was back up to seventh, and was teetering on the edge of the top 10 when he headed to pit road for a green-flag pit stop at Lap 87. He took four tires, but the No. 48 crew was called for a penalty for going over the wall too soon. That had Johnson back in 35th on Lap 98, but he drafted with fellow penalized drivers to move back up the field. With 83 laps to go, he was back in the top 15, and with 70 laps to go he was all the way inside the top 10. He drove all the way to third with 53 to go, and after another cycle of green-flag pit stops, he found himself in second. With 43 laps to go, Johnson retook the lead. On a restart with 35 laps to go following another caution, Johnson lost the lead, but he returned to the front just two laps later. With 12 laps to go in the midst of three-wide racing, Johnson continued fighting for the lead, and though he lost it, remained in the top five. He was in third place when the sixth caution of the day waved with three laps to go, and once the ensuing green-white-checkered attempt got the race to the final lap before a multi-car incident, Johnson finished in fifth.

DALE EARNHARDT JR., NO. 88 NATIONWIDE CHEVROLET SS
FINISHED: 3rd
STANDINGS: 3rd
RECAP: A win in the first Duel at Daytona gave Earnhardt a third-place starting position, and the defending Daytona 500 champion took advantage. He continued to run in the top five for the entirety of the race until green-flag pit stops began at Lap 87. He ran as high as second place for much of that stretch, trailing teammates Gordon and Johnson during their stints at the front of the pack. When the field cycled through green-flag pit stops, Earnhardt found himself in third at Lap 90 behind Gordon and Kahne. With less than 90 laps to go, Earnhardt made a push for second place, and shortly thereafter made a big move to the inside looking to grab the lead. He succeeded with 86 laps to go and continued to hold the lead until Lap 147, but he continued running in second place with Johnson battling him for that position. After a cycle of green-flag pit stops, however, Earnhardt returned to the track in 12th position. By the time the race returned to green with 35 laps to go following another caution flag, Earnhardt had made his way back to seventh. He quickly moved toward the front, pushing for second place, and once he found it, he fought for the lead with Johnson. When the fifth caution of the day meant a restart with 19 laps to go, however, Earnhardt looked to make a move from third place but got caught in the middle of the track and fell back to 15th. He didn't let that deter him, however, fighting all the way back up to eighth before the sixth caution flag of the day forced a green-white-checkered attempt. Earnhardt kept pushing all the way up to third, which is where he would finish the race.