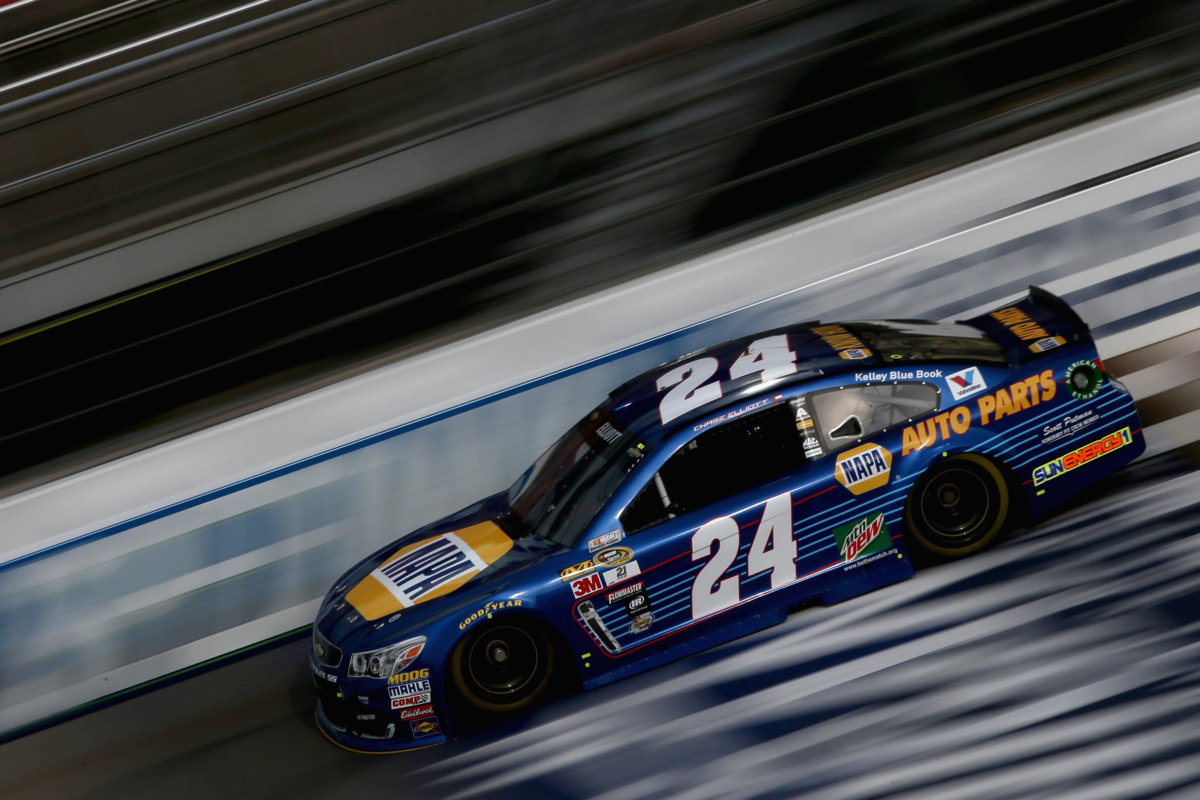 BROOKLYN, Mich. – Chase Elliott made the most of his milestone.

Making his 24th points-paying start in the No. 24 NAPA AUTO PARTS Chevrolet SS, Elliott raced his way to a second-place finish at Michigan International Speedway.

Leading late in the race, Elliott nearly found his first career NASCAR Sprint Cup Series victory, but a caution flag with 13 laps remaining meant one final restart. The driver of the No. 24 NAPA AUTO PARTS Chevrolet SS lost the lead on the restart but recovered for the runner-up result.

"It's definitely unfortunate,” Elliott said, explaining that he spun the tires on the restart. “I hate to let my guys down like that. They bailed me out a few times today and I gave it right back. Unfortunate, but we'll look at the positives and get to Darlington."

Filling in for Dale Earnhardt Jr. in the No. 88 Axalta/University of Michigan Chevrolet SS, Alex Bowman -- who was racing inside the top 10 early in the race before experiencing engine issues -- finished the race 30th.

Below is a detailed look at how the four Hendrick Motorsports drivers fared Sunday at Michigan.

KASEY KAHNE, NO. 5 FARMERS INSURANCE CHEVROLET SS
FINISHED: 14th
STANDINGS: 16th
RECAP: Kahne began Sunday’s race just outside the top 10 in 11th, but following a two-tire pit stop during a competition caution after Lap 20, he made the jump to ninth. He settled into eighth place before making a green-flag pit stop, and thanks to a speedy effort by the No. 5 team, when the field cycled through on lap 71, Kahne found himself in fourth. He continued to run inside the top 10 during the long green-flag run, heading to pit road for a green-flag stop once again shortly after the midway point of the race. When the field cycled through, Kahne was racing in eighth, which is where he remained following a caution for debris on Lap 119. Another extensive green-flag run followed the restart, and Kahne continued racing inside the top 10. After his next green-flag pit stop, Kahne made his way to ninth when the field cycled through with 30 laps to go. When a caution flag waved with 13 laps to go, Kahne headed to pit road, restarting 12th with nine laps remaining. He ultimately took the checkered flag in 14th.

CHASE ELLIOTT, NO. 24 NAPA AUTO PARTS CHEVROLET SS
FINISHED: 2nd
STANDINGS: 11th
RECAP: Starting fifth, Elliott fell outside of the top five when the green flag dropped, but found it again on Lap 53. He continued working his way toward the front, even leading the field for a lap as competitors headed to pit road for green-flag pit stops. After making a stop of his own, Elliott found himself in third when the field cycled through on Lap 71. Twelve laps later, he jumped to the runner-up position. The long, green-flag run continued past the midway point, and Elliott maintained the runner-up spot until green-flag stops began. The driver of the No. 24 NAPA AUTO PARTS Chevrolet SS emerged from pit road ahead of teammate Johnson, and when the field cycled through on Lap 118, Elliott found himself in the race lead once again. He fell to second on a Lap 126 restart following a caution for debris, but when it was time for another cycle of green-flag pit stops, the No. 24 crew put together a fast start and Elliott won the race off of pit road ahead of the first-place competitor. When the field cycled through with 30 laps remaining, Elliott officially retook the lead. A caution flag waved with 13 laps to go, however, and on the restart with nine laps remaining, Elliott fell to third. One lap later he raced back to the runner-up position and spent the remainder of the race trying to chase down the leader. He took the checkered flag second.

JIMMIE JOHNSON, NO. 48 LOWE’S CHEVROLET SS
FINISHED: 6th
STANDINGS: 9th
RECAP: Johnson rolled off the grid from the outside pole position Sunday, and settled into third place after the green flag waved. That is where he remained following a competition caution after Lap 20, and he continued to run inside the top five, moving as high as the runner-up spot before making a green-flag pit stop. When the field cycled through on Lap 71, Johnson took over as the race leader. He held it during the long, green-flag run that followed until he headed to pit road for a green-flag pit stop. When the gas can had trouble connecting to the No. 48 Lowe’s Chevrolet SS, Johnson was passed on pit road by teammate Elliott, losing the lead in the process. Johnson was in third when the field cycled through, but headed to pit road once again for four fresh tires when a caution flag flew for debris. He restarted 10th on Lap 126, but he worked his way toward the top five before making another green-flag pit stop. When the field cycled through with 30 laps remaining, Johnson was running fifth. When a caution flag waved with 13 laps remaining, Johnson headed to pit road, restarting eighth with nine laps to go. He quickly jumped up to sixth, which is where he would cross the finish line.

ALEX BOWMAN, NO. 88 AXALTA/UNIVERSITY OF MICHIGAN CHEVROLET SS
FINISHED: 30th
STANDINGS: 22nd
RECAP: Starting just outside the top five in sixth, Bowman got off to a quick start when the green flag dropped, jumping to fourth place. He remained inside the top five following a competition caution after Lap 20, but on Lap 38 he reported that the No. 88 Axalta/University of Michigan Chevrolet SS was experiencing engine issues. Within five laps he had fallen outside of the top 25, and he eventually fell a lap behind the leaders in the 33rd position. When competitors made green-flag pit stops, Bowman headed behind the wall to the garage area to assess the issue, returning to the track down five laps in the 40th position. He continued gaining as many positions as possible, racing to 37th on Lap 127. With 30 laps remaining, Bowman had raced his way to 35th, still down five laps due to long, green-flag runs. Before the checkered flag waved, he battled all the way up to 30th.