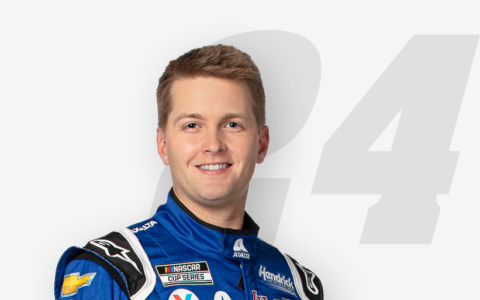 William Byron has ascended the professional ranks of auto racing more rapidly than anyone in recent memory. Going into his fourth season in the NASCAR Cup Series, the 23-year-old driver reunites with former NASCAR Camping World Truck Series crew chief Ryan “Rudy” Fugle who led him to one of the most successful seasons by a rookie in series history. In 2021, Byron is poised to add to his already impressive racing résumé when he climbs back behind the wheel of the iconic No. 24 Chevrolet Camaro ZL1 1LE race car for Hendrick Motorsports.

Byron has quickly amassed an impressive list of accomplishments including a NASCAR national series championship. His body of work is especially impressive considering he first drove a race car just eight years ago. In 2018, he collected his fourth consecutive rookie of the year award, and in 2019, he finally competed on the track without a yellow rookie stripe adorning his back bumper, going on to make the Cup Series playoffs for the first time in his career. Byron continued his success in 2020, capturing his first Cup Series win at the infamous Daytona International Speedway in August, locking himself into the Cup Series playoffs for the second time in his young career.

Hendrick Motorsports signed Byron, then 18, in August 2016 when he was a record-breaking rookie in the NASCAR Camping World Truck Series. By the end of his season driving for Kyle Busch Motorsports, he had racked up an astounding seven victories, 727 laps led out of 3,248 laps completed and three pole positions en route to rookie of the year honors with Fugle calling the shots along the way. Although Byron narrowly missed winning the championship due to an engine failure, it was the most successful debut season in series history.

In 2017, Byron moved up to compete in the NASCAR Xfinity Series for Hendrick Motorsports affiliate JR Motorsports, where in addition to winning the series championship, he earned four wins, two pole positions, 12 top-five finishes, 22 top-10s and rookie of the year. His title-winning campaign included victories at Iowa, Phoenix and the historic venues of Daytona and Indianapolis, where he became the youngest winner of a major race in the track’s 108-year history.

As Byron competed for a championship in the Xfinity Series, Hendrick Motorsports announced his next – and biggest – career move in August 2017. Not only would he take the next step to the elite NASCAR Cup Series, but it would be in the iconic No. 24 Chevrolet made famous by four-time Cup Series champion and NASCAR Hall of Famer Jeff Gordon and his storied Rainbow Warriors team. Like Gordon, Byron went on to claim the rookie of the year title, becoming only the second driver to win the honor in each of NASCAR’s three national series in back-to-back-to-back seasons.

Heading into 2019 with veteran crew chief and seven-time champion Chad Knaus on top of the pit box for Byron’s sophomore season, the duo got off to a quick start by capturing the pole for the season-opening DAYTONA 500, the driver’s first in the Cup Series. From there the No. 24 team continued to bring speed to the track week-in and week-out, collecting four additional pole awards, leading 233 laps and collecting five top-five finishes and 13 top-10s. Continuing to check off boxes of first-time accomplishments, Byron made his first appearance in the playoffs at NASCAR’s highest level and progressed his way to the Round of 12 before ultimately ending the season just shy of the top 10 in points in 11th.

Heading into his third season in the Cup Series, Byron and Knaus continued their success together kicking off the 2020 season with a win in the qualifying race at Daytona before going on to capture the checkered flag again at the 2.5-mile superspeedway – this time in August for the final race of the regular season. That win locked Byron into his second consecutive playoff appearance in the premier series, finishing the year 14th in points with 140 laps led, nine top-five finishes and 14 top-10s.

As a child, Byron began following NASCAR and begged his father to take him to his first race at Martinsville Speedway in 2006. He soon became a regular on iRacing, an online racing simulator used by many professional drivers, and developed into a student of the sport. Realizing it had become more than just a hobby, his father took Byron to visit the U.S. Legend Cars International headquarters in Harrisburg, North Carolina, in the summer of 2012 to learn about an affordable and accessible way to begin real-world racing. They attended an event at Concord Speedway, which confirmed what Byron’s father already knew: His son, then 14, was all in.

No one could have predicted what would follow. Byron began competing in the U.S. Legend Young Lion Division in 2013, a year in which he won nearly half of the 69 legend car events he raced across the United States. All totaled, he earned 33 victories en route to the 2013 U.S. Legend Young Lions National Championship and the 2013 Thursday Thunder Young Lions championship at Atlanta Motor Speedway. It was his first year driving race cars.

At the end of 2013, Byron moved up from the Legends Young Lion Division to the Legends Pro Division, winning races and championships in two winter series – the Winter Nationals at Auburndale Speedway and the Winter Heat Series at Charlotte Motor Speedway. For 2014, he signed to compete regionally in full-size stock cars for JR Motorsports, the team owned by Dale Earnhardt Jr. Byron acclimated quickly to late model stock cars, earning one win, seven poles and 15 top-five finishes in 30 starts for JRM. Success at Hickory Motor Speedway and Caraway Speedway earned him the North Carolina rookie of the year title in the NASCAR Whelen All-American Late Model Series.

Outside of racing, Byron is passionate about his education, his faith and giving back to his community. He is currently enrolled in online classes at Liberty University, which has supported his racing career since 2014 and continues as one of the primary sponsors of the No. 24 Hendrick Motorsports team. Byron, who is studying communications, experienced college life in the fall of 2016 when he lived on campus for his first semester while competing in the Camping World Truck Series.

In 2015, Byron became an Eagle Scout, the highest achievement rank of the Boy Scouts of America, which he earned while racing full time and attending high school. On Dec. 5, 2017, Byron received the Good Scout Award from the Mecklenburg County Boy Scouts of America. The award celebrates members in the Charlotte community who exemplify what it means to represent and serve the Boy Scouts organization at a high level.

When he’s away from school and the racetrack, Byron’s hobbies include watching and attending sporting events, keeping up with his fitness regimen, iRacing, and racing radio-controlled cars. He is an avid fan of his hometown Charlotte Hornets and Carolina Panthers.