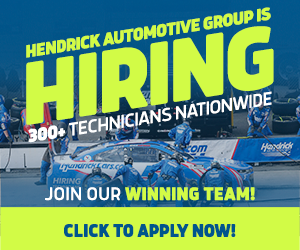 Rick Hendrick is a self-described “gearhead” who turned his passion for the automobile into successful business ventures in the retail automotive and professional auto racing industries.

Raised on a farm near the small community of Palmer Springs, Virginia, Hendrick worked on and raced cars under the watchful eye of his father, “Papa Joe.” After high school, he pursued a co-op work-study program with North Carolina State University and Westinghouse Electric Company in Raleigh, North Carolina.

While in Raleigh, Hendrick opened a small used-car lot with established dealer Mike Leith. Its success convinced Leith to name him general sales manager of his new-car import operation at the age of 23.

In 1976, Hendrick sold off his assets to purchase a struggling franchise in Bennettsville, South Carolina, thus becoming, at 26, the youngest Chevrolet dealer in the United States. His influence sparked a dramatic sales increase as the once troubled location soon became the region’s most profitable.

Bennettsville’s success was a precursor to Hendrick Automotive Group, which today operates collision centers, accessories distributor installers and more than 140 retail franchises across 14 states. It currently is the largest privately held dealership group in the country.

Headquartered in Charlotte, North Carolina, Hendrick Automotive Group generated a company record $9 billion in revenue in 2016 after selling more than 200,000 vehicles and servicing over 2.6 million cars and trucks. Hendrick leads the organization, which employs more than 10,000 people, as its chairman.

Hendrick is second on NASCAR’s all-time Cup victories list (1949-present) and leads all owners in modern-era wins (1972-present). His teams have won at least one Cup-level race each season since 1986 – the longest active streak – and averaged nearly 10 points-paying wins annually over the last decade (2007-16). He is NASCAR’s all-time leader in Cup Series owner’s championships with 14, including a record-tying seven with Johnson, four with Jeff Gordon, one with Terry Labonte, one with Elliott and one with Larson.

In May 2016, Hendrick and wife Linda established the not-for-profit Hendrick Family Foundation. It consolidated the philanthropic efforts of the Hendrick organization and absorbed its predecessor, the Hendrick Marrow Program, which raised more than $15 million since 1997. A leukemia survivor, Hendrick also is involved with the Levine Children’s Hospital in Charlotte and various other charitable endeavors.

Hendrick was inducted into the NASCAR Hall of Fame in 2017 and the International Motorsports Hall of Fame in 2013. He is a recipient of the prestigious Horatio Alger Award, NASCAR’s Bill France Award of Excellence and The Order of the Long Leaf Pine, which is bestowed upon outstanding North Carolinians. In 2014, Hendrick was honored with the Automotive News Lifetime Achievement Award for significant contributions to the auto industry.