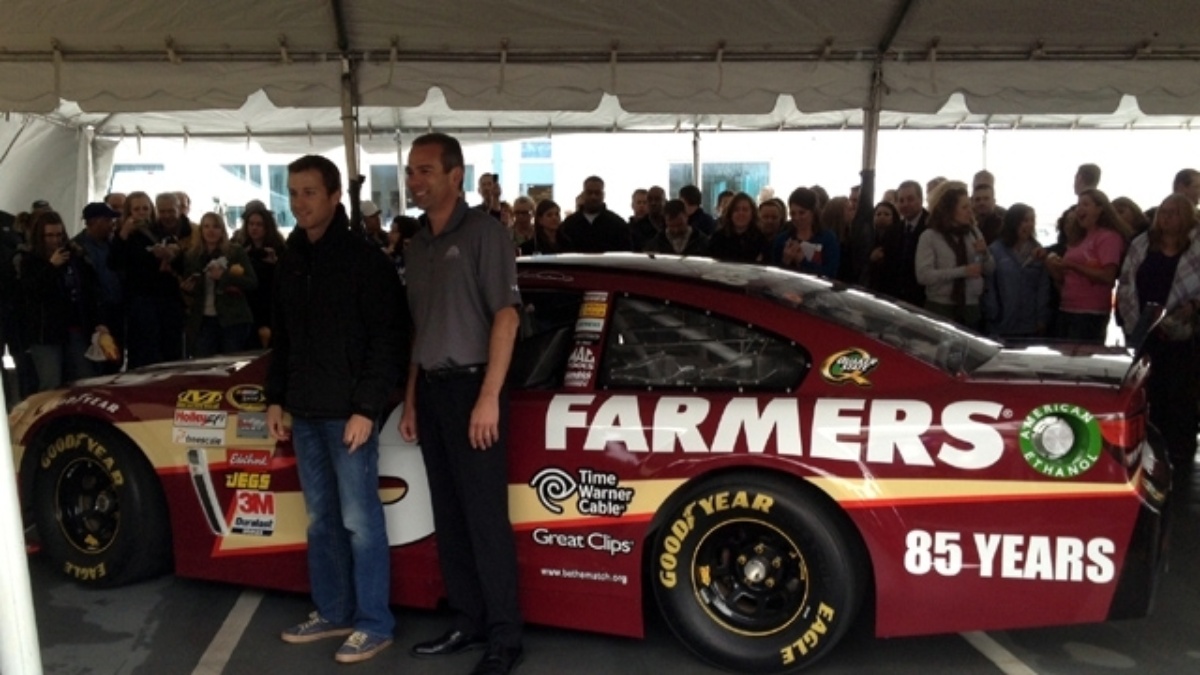 Click here to watch the special scheme get decaled.

The special paint scheme celebrates the company’s 85th anniversary and pays tribute to the first Farmers insured automobile – the 1925 Cadillac Phaeton. Kahne’s No. 5 Farmers Insurance 85th Anniversary Chevrolet SS will evoke the joy and freedom everyone feels when they remember their very first car, just as the Cadillac Phaeton remains a treasured symbol of credibility, longevity and history for Farmers Insurance over the last 85 years.

“We all remember our very first car,” said Farmers CEO Jeff Dailey. “I remember mine well. It was a 1966 convertible, which I paid $450 for out of my own pocket, and that was a real stretch for me. I recall lots of things about that car, but what I remember most is that it taught me the value of hard work and saving money. It also allowed me the freedom of going where I wanted when I wanted.”

Dailey, “All of us at Farmers take great pride in being an important part of people’s lives by insuring their cars, homes and other assets and by helping them make smart decisions in the process.”

“I remember my first set of wheels. It was a red four-wheeler I had when I was young, and I would race it on a track my dad built in our backyard. Now, I get to drive the red Farmers Insurance 85th Anniversary Chevy SS at Kansas that pays tribute to the first car Farmers insured 85 years ago, which is pretty cool,” said Kasey Kahne.

In addition to unveiling his special No. 5 Chevrolet SS paint scheme, Kahne also visited with employees today for a tour of the Farmers Insurance Service Operations and Claims Care Center Complex in Olathe, which is the largest insurance employer in the greater Kansas City area with more than 3,000 employees and agents. Notably, the facility is home to two of the three Farmers Mobile Claims Center catastrophe buses that enable Farmers claims representatives and agents to quickly arrive on the scene of major catastrophes to help customers in their time of need.

“It’s great to be here in Kansas City, and spend some time with all the dedicated employees that help make Farmers the success that it is. I always enjoy the opportunity to meet with Farmers employees and agents and thank them for their continued support,” said Kahne.

Farmers is inviting everyone to join in the year-long, 85th anniversary celebration and, in so doing, to remember their first cars. Fans can play an online matching game and read first car memories from Kahne and his No. 5 Farmers Insurance 85th Anniversary Chevrolet SS team; PGA TOUR golfer Rickie Fowler; band members of Rascal Flatts and more at FarmersRacing.com/FirstCar. Game winners will be entered for a chance to win signed prizes from Kahne, Fowler and band members of Rascal Flatts. Rules and regulations are posted online and the contest closes Sunday, April 21 at 11:59:59 p.m. PT.

A dedicated website, FarmersRacing.com/85Years, features more racing news including:
•Pictures of the commemorative 85th Anniversary paint scheme of the No. 5 Chevrolet SS that Kahne will drive on April 21 at Kansas Speedway.
•Key moments in the past 85 Years of Farmers paralleled with key racing milestones.
•Rollout of videos showcasing the behind the scenes transformation of the No. 5 commemorative paint scheme beginning on Friday, April 19.

The event today at the Farmers Insurance Service Operations and Claims Contact Center Complex in Olathe is one of many festivities Farmers is conducting to commemorate its 85th year of doing business across the country. More than eight decades after its first insurance policy was sold, Farmers now has more than 74,000 employees, agents and district managers in the U.S representing its brands.

Today, Farmers is among the leading and largest personal lines insurance companies in the U.S. protecting the assets of more than 10 million households. The company has a national network of sales agents; and its employees occupy offices in communities such as Wilmington, Delaware, Davie, Florida, Austin, Texas, Grand Rapids, Michigan, Oklahoma City and suburban Kansas City, Portland, Cleveland and Los Angeles. The company’s award-wining corporate training and education center, the University of Farmers, is located in the Southern California city of Agoura Hills with a satellite campus in Grand Rapids, Michigan.