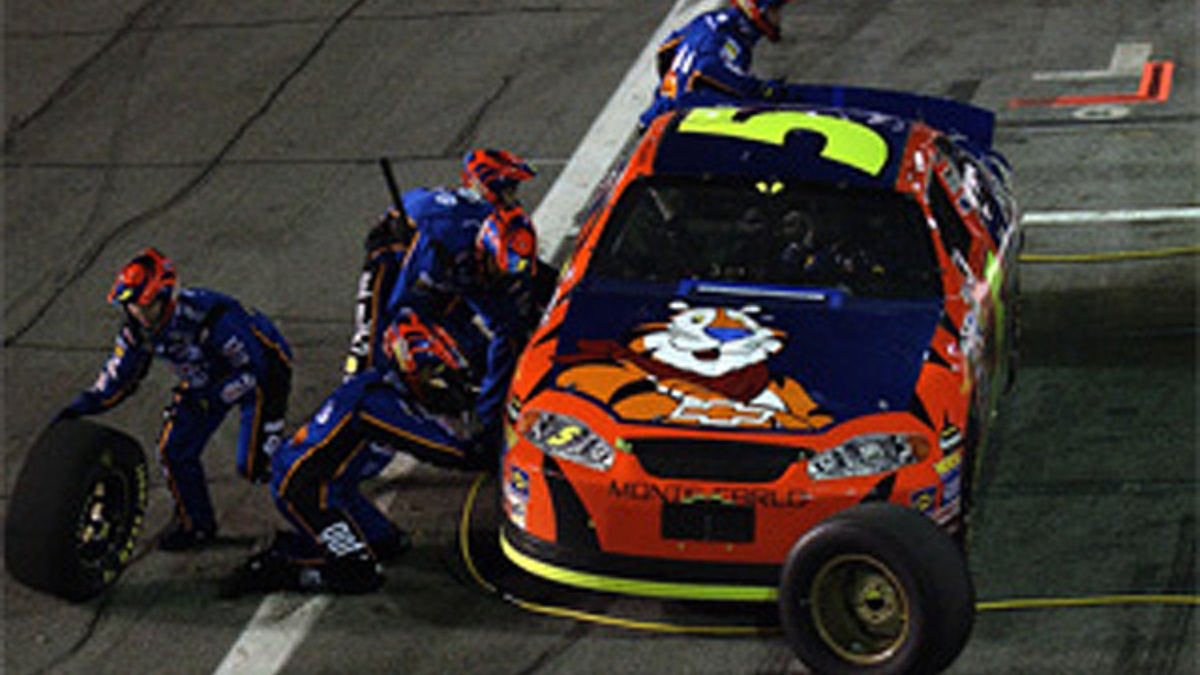 Across the country, thousands of race fans dream of getting the opportunity to work with a NASCAR team. While many hope to work in the NEXTEL Cup Series, the available positions are few and far between, and a resume full of experience is usually required. Begin at the Bottom of the Ladder Many industry insiders recommend that job seekers not try to begin at the top but suggest starting out in lower levels of competition and working their way up through the ranks. Steve Letarte, car chief and rear tire carrier for driver Jeff Gordon and the No. 24 DuPont Team, was 14 years old when he first started working around race shops, cleaning up and helping out as a parts assistant.

“That’s how I got my start in it and just slowly, each year, did more and more,” says Letarte. “Everyone tries to start right on a NEXTEL Cup team or right at the top and they’d be better off going through a truck team or an ARCA team to get some experience. Then when they get their chance to move to a higher-level team, they’d probably have more success.” Starting out with a lower-level team is the best atmosphere to learn in, says Andy Papathanassiou, Director of Personnel and Pit Crew Coordinator at Hendrick Motorsports. “We’re not a great place to teach somebody from the very beginning about racing. But other organizations and other levels of this sport are really good places for people to gain experience.” “The best way for someone who’s young and just starting out, to get into racing is to go to a local or regional race track and get involved with teams that way,” says Papathanassiou. “There are a lot of teams in ASA, ARCA, or USAR looking for and accepting of help. They’ll help teach you some of the basics that you need to learn.” This was the approach of Darian Grubb, race engineer for driver Jimmie Johnson and Team Lowe’s Racing. Working on racecars started out as just a hobby for Grubb. As a high school senior in Floyd, Va., he began helping out a local team that raced late-model stock cars. His first duty was to wax the car. Over time he learned more about the mechanics behind racecars and gained further responsibilities.

In addition to working with the team, Grubb attended Virginia Tech and earned a degree in mechanical engineering. When the team then moved up to the USAR Hooters ProCup Series, his experience and education earned him the crew chief position. After graduation Grubb went to work for Volvo in Greensboro, N.C., for a while before he finally made the decision to make racing a full-time job. He posted his resume online and landed a spot at Petty Enterprises. Grubb spent several years there before joining Hendrick Motorsports in 2003. “Start at a fairly low level at a local track and volunteer with a team. There you can learn about racing – how it works and what’s involved,” says Ken Howes, Director of Competition for Hendrick Motorsports. “The guys we have now, they’ve all come up one way or another and learned the skills at a lower level.” Build a Solid Foundation In addition to experience, a certain level of education is needed to work for a race team. Graduating from high school is the first requirement, and higher education is necessary for some positions. For people interested in engineering jobs and other high-level work, numerous universities and community colleges offer a variety of engineering programs, and many have racing-themed courses. “There are lots and lots of schools around the country that are offering racing-oriented classes as part of their engineering degrees,” says Papathanassiou.

“We don’t really have any one particular school or program that we recommend,” he adds. “Although, the University of North Carolina at Charlotte is right next door for your more traditionally college-oriented people, and the NASCAR Technical Institute is just right up the road – not only from us, but from so many NASCAR teams. Those are probably two good places to start to research.” While working on cars demands a certain level of education and skill, being a pit crew member has a totally different set of requirements. Athletic ability is critical during pit stops, so being in shape is a must. “Any former athletic experience is good, because what we do over the wall is more like a football play than it is like a mechanical event,” says Papathanassiou. No matter what job you are searching for, having a solid resume is always helpful. “Build a resume so that when you come to a team like us, we can see whether your serious or not,” says Howes.

Know What to Expect Working for a race team may be a dream for many, but in reality it’s not all glitz and glamour. The long hours and extensive amount of travel can be taxing on team members and their families. “It’s not an easy job. You can expect lots of long hours, hard work, travel and being away from home quite a bit,” says Howes. “You definitely need to have an understanding family.” While working for a race team is quite demanding, it can be enjoyable as well. “If you have your career in racing, it’s more of a lifestyle than a job. You don’t clock in and clock out of this thing. You have to live it every day. You can expect racing to take over your life, for good or bad,” says Papathanassiou. “But there’s lots of satisfaction if you like what you do because we race all of the time.” Get to Work If you are set on finding a job in racing, be prepared to search for quite a while because job openings can be hard to come by. “Make sure you have a way to cover your expenses,” says Papathanassiou. “Finding a job will take longer than you think.”

“It won’t cost you anything except your time and effort, and you’re going to have to put in a lot of both because there are a lot of people that want to do this,” he added. “Figure out a way to get your expenses handled on an ongoing basis. “I know people who have taken jobs at a home improvement store like Lowe’s and they’ll do some sort of a job that will allow them time during the day or certain days to go ahead and interview and help out teams and volunteer.” Breaking into the racing business may be difficult, but it is not impossible if you put in a lot of time and energy. “Study hard, work hard and get lucky – be in the right place at the right time,” says Howes.
Prev Article