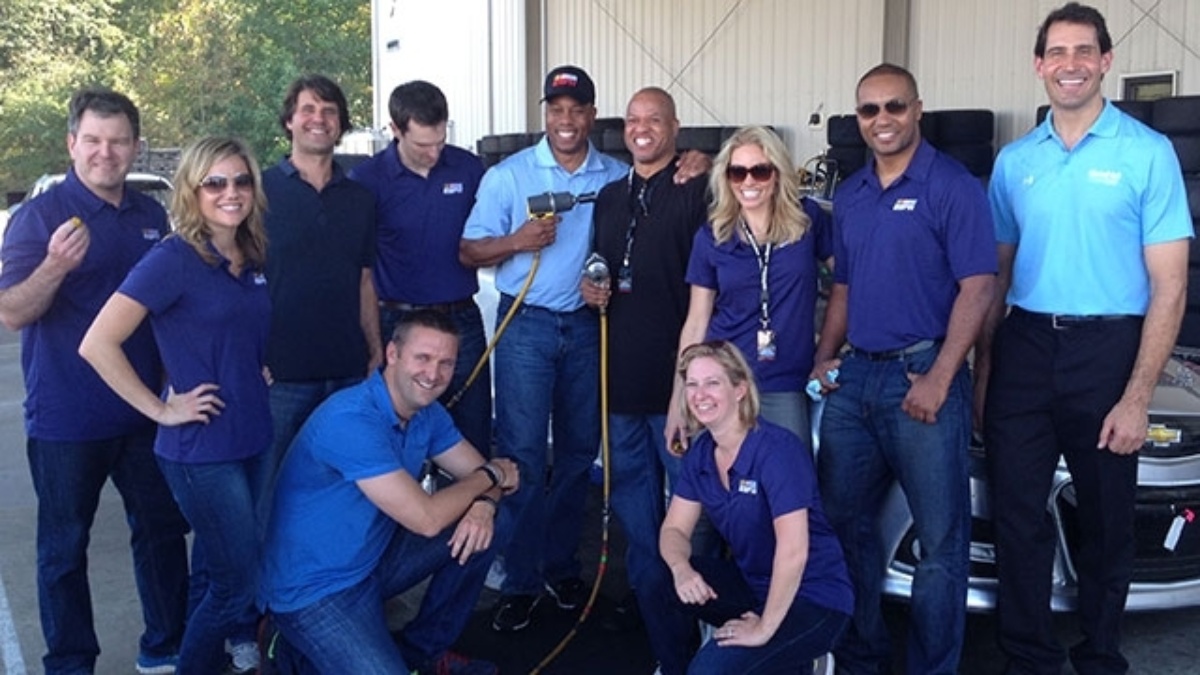 “At ESPN, we cover all sports, but it's a very stick-and-ball culture,” Feinberg explained.

So he brought a concept to ESPN management and eventually NASCAR management. Why not gather a group of ESPN employees and bring them inside the world of NASCAR?

“By immersing people in it, they learn about it, they have a new respect for it, and when it comes down to working on it, they do better,” he said.

ESPN and NASCAR loved the idea, and for five years, Feinberg has hand-picked a group to make the trek to Hendrick Motorsports headquarters in Concord, North Carolina.

“From day one I knew I wanted Hendrick Motorsports to be a part of it,” he said. “Even though I'm a racing production guy, I'm also a fan and I had been on [Hendrick Motorsports'] campus before. This is such an incredible facility that I knew it would have an impact on everybody."

In the 2014 version of the immersion program, that certainly proved true.

“This has been amazing,” Harris said, noting that he didn’t realize the Hendrick Motorsports campus was so expansive. “I’m trying to think of so many ways to quit my job and come down here to work.”

Included in the immersion was an overview of the human performance element of the race teams, featuring a tour of the training field, gym and pit pad.

At the pit pad, the group got a chance to take a shot at changing a tire, splitting into two teams racing against the clock for the win.

The team featuring Kerney and Coleman came out on top of the team led by Harris on the air gun.

“Changing a tire was just the most exciting thing I've done in the last two months,” Kerney laughed. “It's amazing because working with each other, working with the team and shaving off a second here and there -- a millisecond was unbelievable between success and failure.”

"I don't mind being a champ by default -- that has never bothered me,” Coleman joked. “That experience was pretty cool and having a chance to work with my coworkers outside of our building in an environment like that, that was pretty sweet."

Harris noted the competitive nature that emerged between the two teams of coworkers, and the mistake that led the opposing team’s victory was still eating at him when the competition finished.

Regardless, he enjoyed the inside view of what is required for a successful pit stop in NASCAR.

“A lot depends on that 12 seconds -- or that 30 seconds, as it turned out because I didn't press my [air-gun] button. I am so upset, still,” he said, chuckling. “We're all competitive at something, whether it be former athletes, even on the air, even if you get a good joke on your co-anchor that you're trying to think of something to one-up him on the air. You're supposed to be working, you're trying to think of a good joke.”

“It’s just that human nature thing that comes out, and it’s great.”

After the competition, the group went on to tour the engine shop and the race shops for the Nos. 5, 24, 48 and 88 teams.

Feinberg was impressed with how inquisitive the group was throughout the tour.

“I've had groups in the past where I'm the guy who sort of has to ask the questions to get the conversation going,” he said. “These people are all blown away. When that happens, I know it's a successful day."

It was just part of their immersion, as the group later got the chance to take in the Bank of America 500 at Charlotte Motor Speedway.

The participants said they will take a whole new appreciation for NASCAR back with them to ESPN headquarters in Bristol, Connecticut.

"Oh my goodness, I tell people all the time when you have a blessing and you are able to run with that blessing, that's what this whole experience has been about, not just for me but for everybody representing our company being a part of NASCAR, just seeing what goes on before you see the drivers on the track and all the hard work they put in to everything,” Coleman said. “Having a chance to see exactly how the car is built, how the car works, what kind of planning goes in to everything, those are the kinds of things that you never know if you're ever going to be a part of it, and it's an unknown factor to you, but when you get a chance to be a part of it, it's really, really special."

For a photo gallery of the visit, click here.