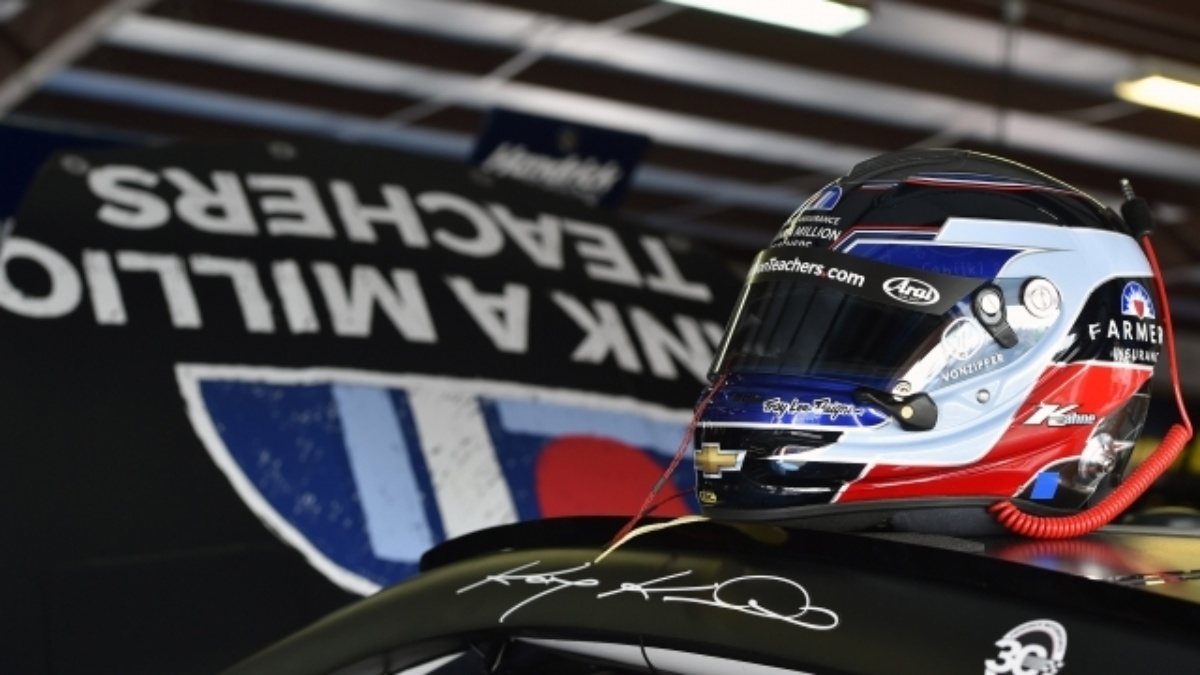 TALLADEGA, Ala. – Kasey Kahne was unflappable on Sunday at Talladega Superspeedway. The driver of the No. 5 Farmers “Thank a Million Teachers” Chevrolet SS was quiet on the radio as he rallied from a deep starting spot to record the eighth-place result – his fifth career top-10 finish at Talladega and his third of the 2014 NASCAR Sprint Cup season.

Kahne’s Hendrick Motorsports teammates weren’t quite as fortunate. Jimmie Johnson made the most of a late-race spin. He stayed on the lead lap and ultimately finished 23rd ahead of teammate Dale Earnhardt Jr. (26th). Jeff Gordon was involved in an early multicar collision and returned to finish 39th.

Here is a look at how the Hendrick Motorsports lineup fared:

KASEY KAHNE, NO. 5 FARMERS “THANK A MILLION TEACHERS” CHEVROLET SS
RACE FINISH: Eighth.
STANDINGS: 20th.
RECAP: Kasey Kahne qualified 17th for Sunday’s NASCAR Sprint Cup event at Talladega Superspeedway, but started the 188-lap event from the rear of the field after failing post-qualifying inspection. Undaunted, the driver of the No. 5 Farmers “Thank a Million Teachers” used the draft to rocket into 18th by Lap 6, and he was running 13th seven laps later when the caution flag was waved. The No. 5 team used a right-side tire stop under caution to move into the top 10.  As the race unfolded, Kahne’s position changed with the draft and he frequently used solid right-tire stops to pick up spots. Kahne cracked the top 10 once again by Lap 119 joining teammates Jimmie Johnson and then-leader Dale Earnhardt Jr.  Kahne avoided a Lap 137 multicar incident and opted to stay on track when another caution flag was waved on Lap 151. He restarted ninth and fluctuated with the draft, while avoiding another multicar incident 20 laps later. Kahne stopped for four tires and fuel during that caution period for the dash to the finish. He crossed the finish line ninth.

JEFF GORDON, NO. 24 DRIVE TO END HUNGER CHEVROLET SS
RACE FINISH: 39th.
STANDINGS: First.
RECAP: Jeff Gordon started 11th and was leading the field in his No. 24 Drive to End Hunger Chevrolet SS by Lap 9 at Talladega Superspeedway. Gordon hovered inside the top 10 until he made a pit stop during a Lap 50 caution period for debris. During the four-tire and fuel stop, Gordon was boxed in by another competitor. The delay sent Gordon back onto the track in 22nd, and he immediately began his forward march. The draft made improving track position tough, but spotter Eddie D’Hondt assured Gordon, “We know what we got. I've already had about six guys walk up to me here telling me we're the strongest car out here." Gordon improved to 21st by Lap 137 and was running the high line when he was collected in a multicar incident. The No. 24 team addressed the damage and sent Gordon back on track to collect a 39th-place finish.

JIMMIE JOHNSON, NO. 48 LOWE’S/VALSPAR RESERVE CHEVROLET SS
RACE FINISH: 23rd.
STANDINGS: Seventh.
RECAP: Jimmie Johnson rolled off the grid 20th on Sunday at Talladega Superspeedway and improved three spots by the Lap 13 caution. During an ensuing stop for right-side tires and fuel, Johnson reported that his No. 48 Lowe’s/Valspar Reserve Chevrolet SS was balanced. Johnson improved to battle for the lead around Lap 26, and 14 laps later, he was pacing the field. Despite the draft, Johnson maintained his footing inside the top 15. On Lap 60, crew chief Chad Knaus told Johnson the inside lane definitely was the strongest, so Johnson – then running second – gave it a shot. Johnson tried various lines as the race unfolded, often reporting that his No. 48 Chevy SS was running fine. On Lap 134, Johnson was running 10th and forcing the field four-wide, when a multi-car incident unfolded in front of him. Johnson incurred some bumper damage that his No. 48 team addressed under caution. After two trips down pit road to fix the damage and another one for extra fuel, Johnson lined back up in 28th. Johnson was working on track position when his car got loose, and he was involved in a multicar incident on Lap 174. He stopped for four tires and returned on the track to finish 23rd.

DALE EARNHARDT JR., NO. 88 NATIONAL GUARD CHEVROLET SS
RACE FINISH: 26th
STANDINGS: Fourth.
RECAP: Dale Earnhardt Jr. lined up 31st and improved to run 19th by the Lap 13 caution. Apart from reporting a tight-handling condition early, Earnhardt was mostly quiet on the radio as he navigated the high banks of Talladega’s 2.66-mile superspeedway. As the draft ebbed and flowed, so did Earnhardt’s position. When the caution flag was waved on Lap 105, Earnhardt stopped on pit road for fuel and a quick chassis adjustment. Swift work by the No. 88 team put Earnhardt’s National Guard Chevrolet SS in the lead and he brought the field to the green flag. Earnhardt led 26 laps during the closing circuits before opting to hang back, anticipating a late-race multicar incident. Earnhardt’s prediction proved accurate, and several cars – including teammate Jimmie Johnson – were involved on Lap 171. Earnhardt lined up 20th for the restart, but struggled to find track position. He crossed the finish line 26th.