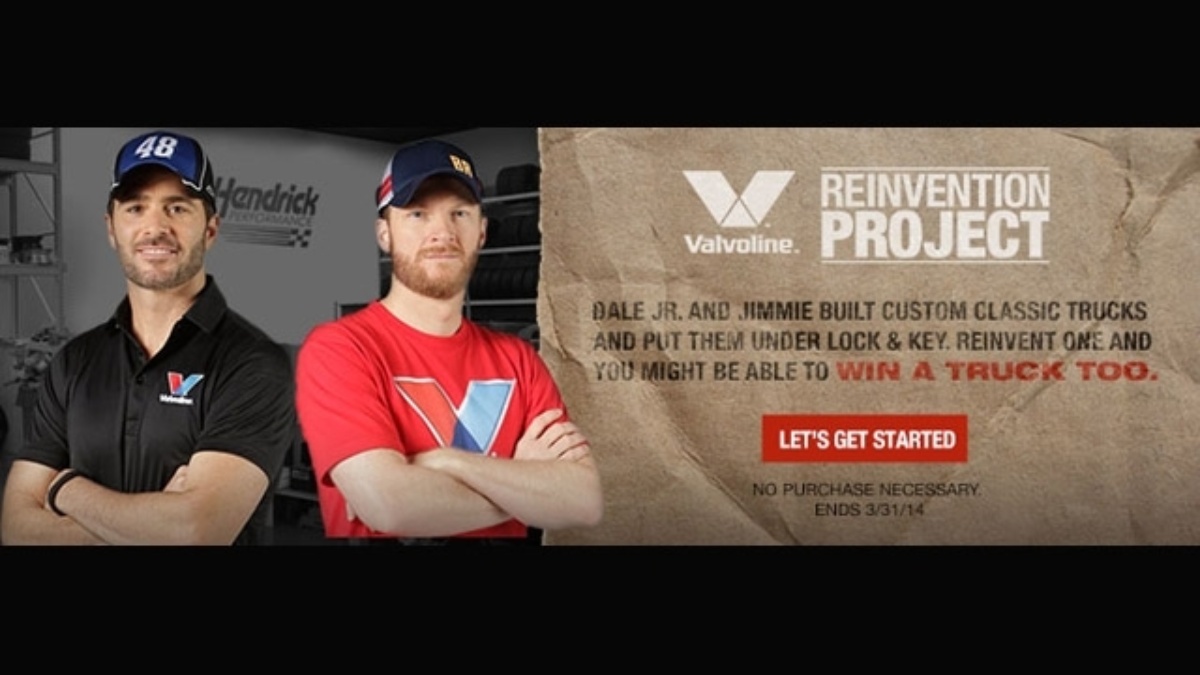 LEXINGTON, Ky. – Valvoline and Hendrick Motorsports today announced a first-of-its-kind consumer challenge called the Reinvention Project. Valvoline is working with NASCAR Sprint Cup Series drivers Jimmie Johnson and Dale Earnhardt Jr. to secretly reinvent two classic Chevy trucks and will be keeping them under wraps to give fans a chance to get in on the action.

Starting today, car enthusiasts everywhere can put their know-how to the test in an attempt to guess the various features of Earnhardt Jr.’s and Johnson’s creations. A virtual garage hosted at www.ReinventionProject.com invites consumers to select the parts that the drivers hand-picked for their high-performance trucks, from Chevrolet Performance* engines, to American Eagle* wheels and Goodyear* tires. Clues and updates will be released via Valvoline’s social media channels – with the hashtags #TeamJimmie or #TeamDaleJr – to help participants revisit and fine-tune their online truck builds along the way.

“The opportunity to work with Valvoline on the Reinvention Project is one I couldn’t pass up,” said Johnson, driver of the No. 48 Chevrolet SS. “Having the flexibility to rebuild and reinvent nearly every part of my shop truck from the ground up is such a cool experience.”

“Working alongside Valvoline and Hendrick Motorsports, the automotive know-how is incredible,” said Earnhardt Jr., driver of the No. 88 Chevrolet SS. “The finished product is going to be second-to-none.”

Valvoline is the Official Lubricants Supplier of Hendrick Motorsports and will be featured as a major associate sponsor of the team’s Chevrolet SS race cars in 2014. In addition to Earnhardt Jr. and Johnson, Sprint Cup Series drivers Kasey Kahne and Jeff Gordon will also use Valvoline oil in their race cars. Hendrick Motorsports uses a specially designed Valvoline racing formulation in its Chevrolet R-07 racing engines in the elite Sprint Cup Series. This marks a reunion of sorts, as Valvoline was a team sponsor from 1993-95, supplying lubricant technology that contributed to Hendrick Motorsports’ first Cup championship with Gordon in 1995.

“We are thrilled to kick off our relationship with Hendrick Motorsports the best way we know how – by getting in the garage and under the hood,” said Heidi Matheys, senior vice president of Valvoline’s Do-It-Yourself channel. “Our shared commitment to innovation and pride in a hands-on approach led us to the Reinvention Project. We’re looking forward to seeing the online truck builds from all the car enthusiasts out there.”

Inspired by the brand’s most recent “Valvoline 140” campaign, the Reinvention Project celebrates the advancement that has taken place in the more than 140 years since introducing motor oil in 1866. Valvoline has remained committed to studying the evolution of engines and how to keep them running at peak performance ever since. The Reinvention Project combines appreciation for the amazing Chevy trucks of the past 75 years and commitment to continued innovation and reinvention to meet the needs of today’s drivers everywhere. Other leaders in automotive technology like Wilwood* brakes, Goodyear tires and American Eagle wheels will be lending their support, with both trucks getting Chevrolet Performance crate engines under the hood to ensure plenty of power and reliability.

Inside the virtual garage, fans can choose their truck parts piece by piece, including selections for body, paint, engine, motor oil, wheels, suspension and door art. The closer a fan’s truck submission is to the drivers’ final creations, the more chances they will receive toward winning the grand prize – their own classic Chevy truck. Additional prizes include signed firesuits, signed racecar hoods, and a set of American Eagle wheels and Goodyear tires.