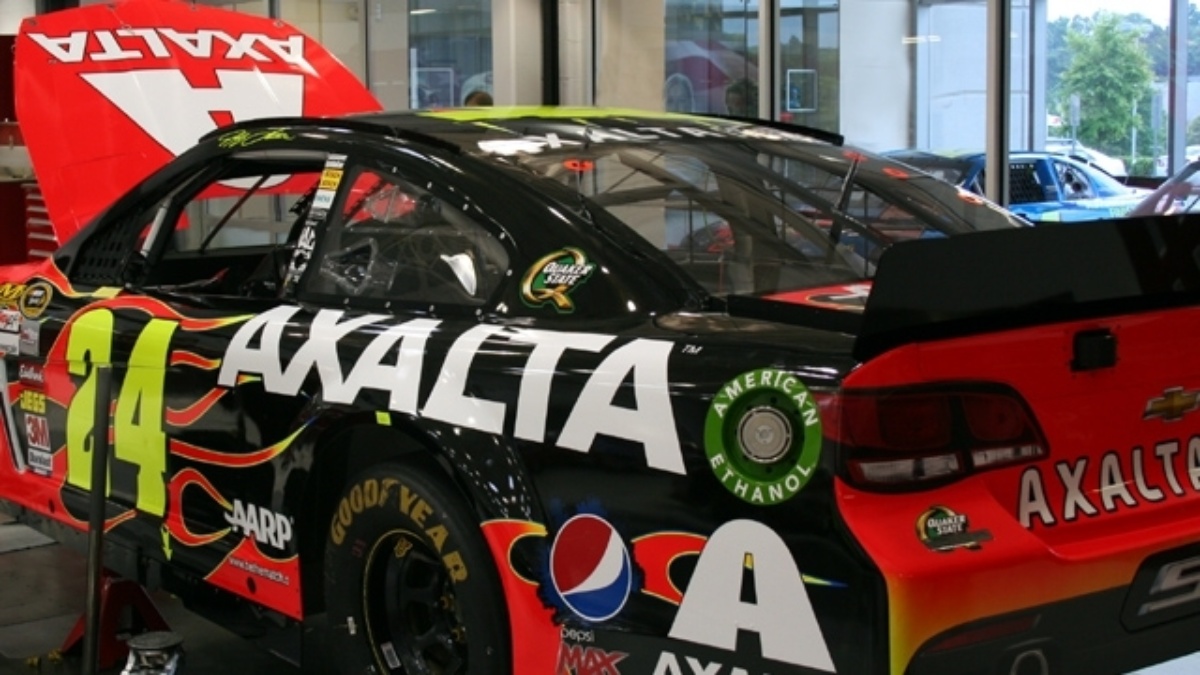 POCONO, Pa. - The last time Jeff Gordon visited Pocono Raceway, the No. 24 Chevrolet had a great finish. This time he will have the same great finish - just with a different name.

In August, Gordon started 27th and worked his way up to sixth before a Lap 90 restart. One corner later, he was leading.

"I was able to clear Kasey (Kahne) before we got to Turn 1," Gordon said of the restart. "I knew I wanted that bottom lane.

Contact between the leaders sent the top four either into a spin or out of the groove. Gordon drove the bottom lane to the lead - and to the win since the race never restarted due to rain. Click here to see photos from Gordon's win.

The finish on the car that weekend was DuPont Performance Coatings. That business was sold in the first quarter of this year and was re-branded Axalta Coating Systems. So while the name may have changed, Gordon's No. 24 Chevrolet SS will feature the same great finish in this Sunday's Party in the Poconos 400. Plus, the car will display the bold new Axalta logo.

"This is our 21st year together," said Gordon, referencing the longest sponsor/driver/team pairing in NASCAR. "They have been with us since my first race at Atlanta in 1992, and they have been the 'Official Finish of NASCAR' since 1994.

"It's been a great relationship that continues to this day - the same people making the same great finishes just with a different name."

Gordon, the all-time lap leader here with 965, is the winningest driver at the 2.5-mile track. Along with his record six victories, Gordon has two poles, 18 top-five finishes and 28 top-10s at "The Tricky Triangle."

"Pocono is a unique track," said Gordon, whose No. 24 Axalta Coating Systems Chevrolet SS will feature the familiar FireStorm paint scheme. "You can go out there thinking you're pushing hard and be a second off the pace. It's a track where a lot of speed can be lost or gained based on how hard you push it. Finding the edge and the limits is a little bit tougher on such a big race track with three unique corners.

"The Tunnel Turn (2) has always been one of the most hair-raising experiences on our schedule. It takes full commitment.

"When you hit it right, it's a beautiful thing."