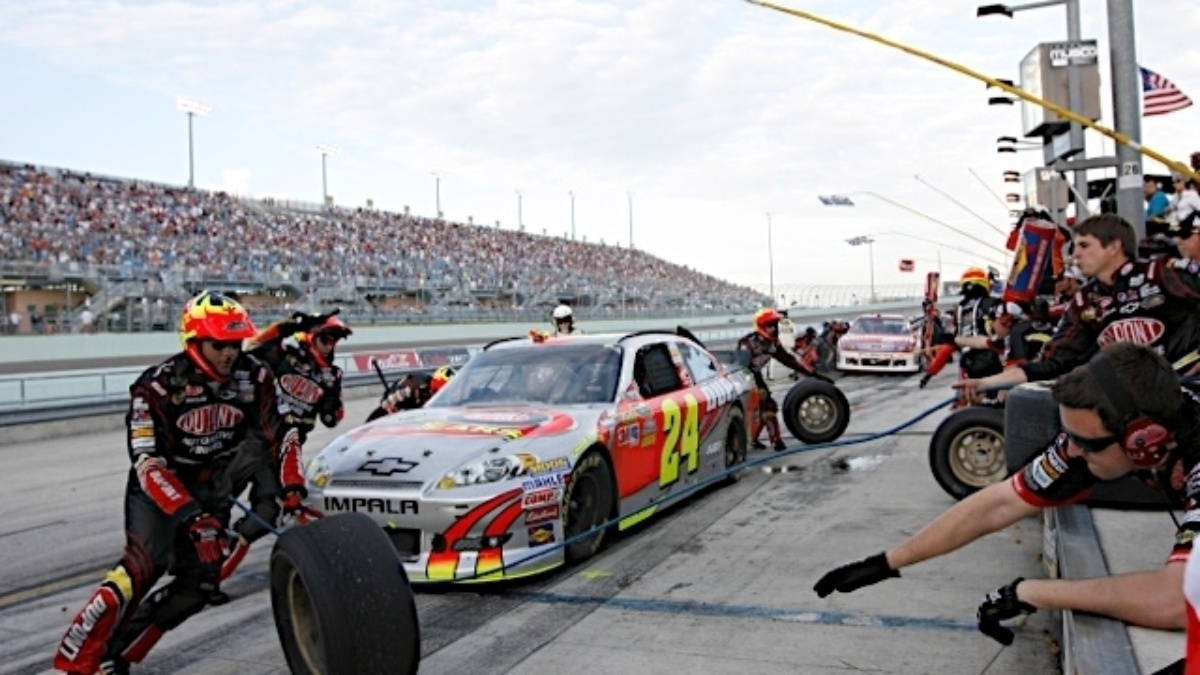 All four Hendrick Motorsports teams won at least one Sprint Cup race in 2012, marking the third time that has happened since the organization expanded to a four-car operation in 2002. Hendrick Motorsports also put four teams in Victory Lane in 2006 (nine combined wins) and 2007 (18 victories).

Gordon was joined in the top 10 on Sunday by teammate Dale Earnhardt Jr. Kasey Kahne finished 21st and Jimmie Johnson was scored 36th.

Here is the breakdown by team:

Kasey Kahne, No. 5 Farmers Insurance Chevrolet
Race finish: 21st.
Chase position: Fourth.
Race recap: Kasey Kahne lined up 12th in his No. 5 Farmers Insurance Chevrolet on Sunday at Homestead-Miami Speedway and cracked the top 10 nearly immediately. Within the first 30 circuits, Kahne improved his position to seventh. The driver of the No. 5 Chevy maintained his position inside the top 10 throughout the race and assumed the lead on Lap 159 when teammate Jimmie Johnson stopped during the caution period. Kahne kept the lead off the Lap 162 restart and battled Kyle Busch for several circuits before slipping into the second position. With 67 laps to go, Kahne again inherited the lead during green-flag pit stops. But Kahne encountered misfortune when he eventually made his way down pit road. The No. 5 Chevy was clocked too fast entering, and Kahne had to complete a pass-through penalty. Kahne spent the remainder of the race working to get back on the lead lap. He finished 21st and ranks fourth in the standings.

Jeff Gordon, No. 24 DuPont Chevrolet
Race finish: First.
Chase position: 10th.
Race recap: Jeff Gordon opened Sunday’s race from the 15th position and cracked the top 10 by Lap 25. Maneuvering his speedy No. 24 DuPont Chevrolet, Gordon held the seventh position after an early pit stop for four tires and fuel. “Nice work,” spotter Eddie D’Hondt encouraged Gordon. “You’re faster than these guys ahead of you.” Gordon continued his forward march, picking up the sixth position on Lap 88 and moving into third 19 laps later. During a mid-race pit stop, Gordon took four tires, although several cars on the lead lap opted for two. The decision didn’t hurt Gordon, and he climbed from his 11th starting spot back into the top five quickly. As the race unfolded, Gordon took the lead twice more during green-flag stops to move into sixth on the all-time list. Gordon entered Sunday’s race with 23,133 laps led for his career and trailed Darrell Waltrip (23,134 laps) by one lap. The driver of the No. 24 Chevy moved into the lead with 10 laps left in the 267-lap event and held on to win the first Cup event at Homestead for Hendrick Motorsports. Gordon ultimately led 14 laps at the 1.5-mile oval and wrapped up the season ranked 10th in the standings.

Jimmie Johnson, No. 48 Lowe’s Chevrolet
Race finish: 36th.
Chase position: Third.
Race recap: Jimmie Johnson navigated the partially-shaded Homestead-Miami Speedway to climb into seventh by Lap 60. Johnson frequently raced against Chase leader Brad Keselowski during the outset of the 267-lap event and passed Keselowski on Lap 47 for the sixth spot. Johnson held the sixth position after a stop under caution and cracked the top five by Lap 87. Johnson overcame wind gusts and benefited from several great stops by the No. 48 team, including an early two-tire stop on Lap 145 that gave Johnson the lead. He restarted from the outside with a two-point deficit on Keselowski and took the lead on the Lap 149 restart. Johnson claimed the points lead a couple times during the next several circuits and kept the Chase battle close. With 66 laps to go, Johnson inherited the lead again during green-flag stops and again took the points lead while Keselowski stopped for fuel. Johnson decided to make his stop 11 laps later when he was running one-two with teammate Jeff Gordon. During the stop, crew chief Chad Knaus called for four tires, minor adjustments and lots of fuel. The No. 48 team was preparing for a fuel-mileage race. But a miscue on pit road changed the gameplan and Johnson's quest for a sixth Cup championship. Johnson had to return to pit road for a missing lug nut. Upon returning to the track in 25th and one lap down, Johnson’s No. 48 Chevy began to emit smoke and he returned to pit road. Johnson spent the remainder of the race in the garage, where the No. 48 team attempted to repair an issue with the rear gear. Johnson finished 36th and ranked third in the standings.

Dale Earnhardt Jr., No. 88 National Guard/Diet Mountain Dew Chevrolet
Race finish: 10th.
Chase position: 12th.
Race recap: Dale Earnhardt Jr. rolled off the grid in 16th Sunday, sporting his 2013 paint scheme on his current No. 88 National Guard/Diet Mountain Dew Chevrolet. Earnhardt grabbed another position within the first 24 laps at Homestead-Miami Speedway and reported to crew chief Steve Letarte that his car seemed to be slicker up against the fence. By Lap 75, Earnhardt was running 17th. Earnhardt spent most of the race running inside the top 15 and improved to finish the race 10th, nabbing his first top-10 result at the 1.5-mile oval.