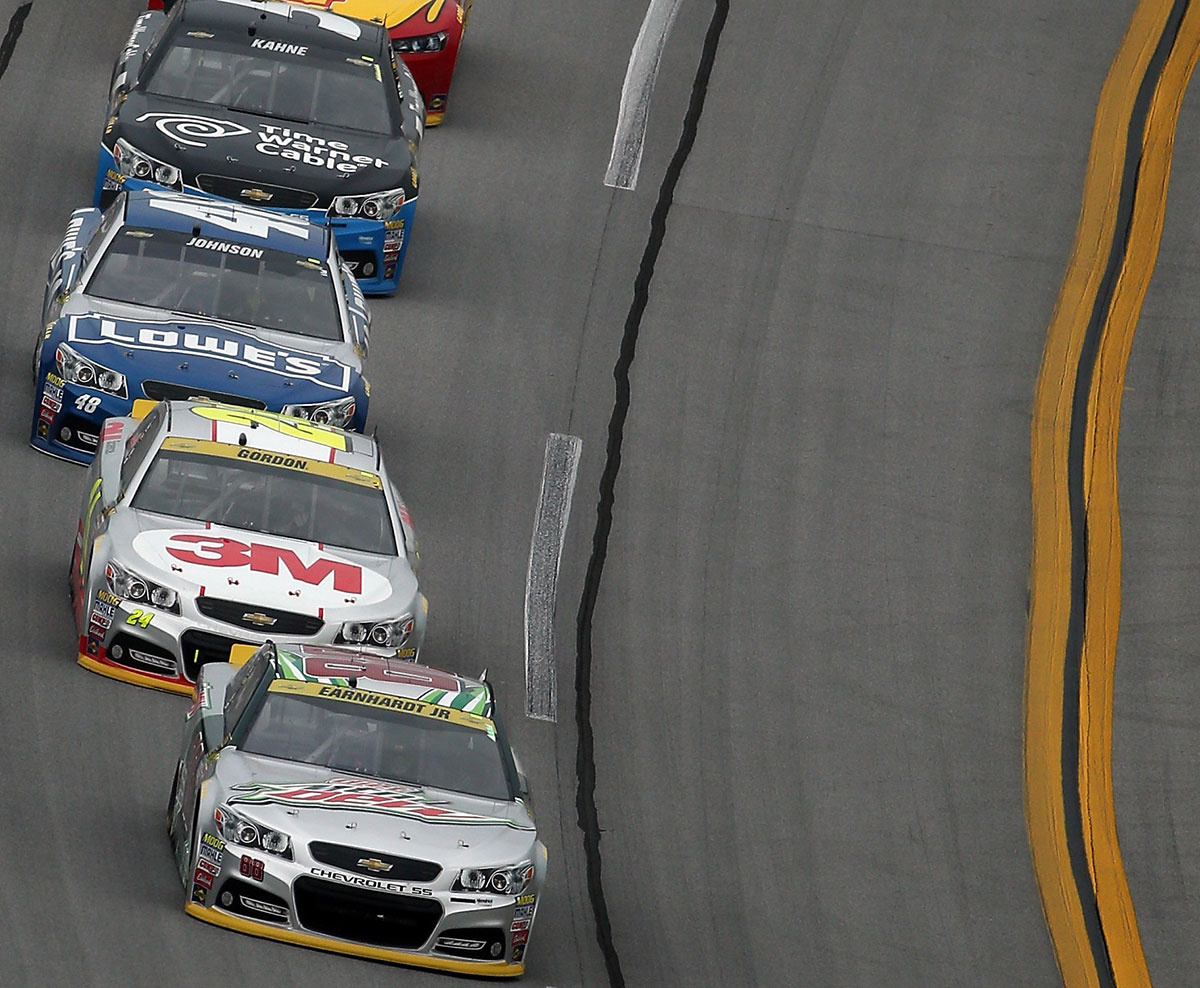 TALLADEGA, Ala. – In an intense Sunday afternoon at Talladega Superspeedway, Dale Earnhardt Jr. came up just short in his bid for a trip to Victory Lane.

A green-white-checkered attempt was ended by a caution flag, at which point NASCAR determined that Joey Logano was leading Earnhardt, giving the win to Logano and eliminating Earnhardt from the Chase for the NASCAR Sprint Cup.

“I’m proud of what we did today,” Earnhardt said. “We did everything we needed to do, just fell a little short -- about the width of the splitter.”

Jeff Gordon, meanwhile, finished third, and safely advanced to the eight-driver, three-race Eliminator Round of the Chase.

Jimmie Johnson was the next of the Hendrick Motorsports teammates with an 18th-place result, and Kasey Kahne finished 19th.

Below is a detailed look at how the four Hendrick Motorsports teammates fared Sunday.

KASEY KAHNE, NO. 5 TIME WARNER CABLE CHEVROLET SS
FINISHED: 19th
STANDINGS: 18th
RECAP: Kahne started Sunday from the outside pole beside teammate Gordon, and early in the race Hendrick Motorsports held onto places one through four. But as the field moved three-wide, Kahne fell all the way back to 12th on Lap 14. Just nine laps later, however, Kahne was already back up to fourth with his three teammates ahead of him. On Lap 40, green-flag stops were underway, and Kahne headed to pit road for a four-tire stop. When he returned to the track, he found the runner-up position on Lap 44, and he continued battling to remain inside the top five even after making yet another green-flag stop on Lap 81. On Lap 93, he was back in the runner-up position. And on Lap 101, he took the lead. He made his third green-flag pit stop from the lead, returning to the track and finding third place by Lap 122. After the first caution flag of the race waved on Lap 132, Kahne was 11th following a trip to pit road. He fell to 20th before making his final green-flag pit stop, but he continued to battle, ultimately finishing 19th.

JEFF GORDON, NO. 24 3M CHEVROLET SS
FINISHED: 3rd
STANDINGS: 3rd
RECAP: The pole-sitter for Sunday’s race, Gordon led the first eight laps of the race before falling out of the lead. On Lap 18, he was battling teammate Earnhardt for the lead, settling in behind the No. 88 Chevrolet SS. Gordon took four tires during his first green-flag pit stop on Lap 40, finding 10th place on Lap 44 after returning to the track. Within a lap he was back inside the top-five, and 20 laps later he was in fourth with Hendrick Motorsports owning positions one through four once again. After a second green-flag pit stop for four tires, Gordon was outside of the top-10, but by Lap 100 he was back in third and 11 laps later he was the runner-up behind teammate Kahne. After a third green-flag pit stop on Lap 120, Gordon returned to the track in fifth by Lap 122. After the first caution flag of the race waved on Lap 132, Gordon lined up fourth for the ensuing restart. He fell just outside of the top 10 by Lap 148, however. With 35 laps to go, he had jumped all the way back up to the runner-up position. After one more green-flag pit stop for only fuel, Gordon found the top 10 once again with 12 laps remaining. As teammate Earnhardt moved through the field, Gordon stayed right behind him pushing toward the front. Lining up fourth for a green-white-checkered finish, Gordon earned a third-place result.

JIMMIE JOHNSON, NO. 48 LOWE’S CHEVROLET SS
FINISHED: 18th
STANDINGS: 13th
RECAP: Rolling off the grid third, Johnson remained inside the top 10 for the early stretch of the race, finding third place once again on Lap 23, with Hendrick Motorsports running first through fourth. After his first green-flag pit stop at Lap 40, Johnson took over the lead on Lap 42. He proceeded to lead the next 22 laps before teammate Earnhardt found the front of the pack and Johnson settled into the runner-up position. After a second green-flag stop on Lap 80, Johnson returned to the track and found third place by Lap 85. He maintained a top-10 position until he once again found fourth place behind his three teammates on Lap 111. After a third green-flag pit stop, he returned to the track behind teammate Earnhardt, but took over the lead on Lap 122 when Earnhardt was called back to pit road for a penalty. After the first caution flag of the race waved on Lap 132, Johnson returned from pit road to restart 25th after returning to pit road for more fuel. He found the top five with 35 laps to go. After a final green-flag pit stop, however, Johnson found himself outside of the top 20 when he returned to the track. He kept battling, but was spun out by a competitor as the field prepared to make an attempt at a green-white-checkered finish. Ultimately Johnson finished 18th after the official green-white-checkered attempt ended with a caution.

DALE EARNHARDT JR., NO. 88 DIET MOUNTAIN DEW CHEVROLET SS
FINISHED: 2nd
STANDINGS: 12th
RECAP: Earnhardt began Sunday’s race fifth, but by Lap 7 he was already in second battling for the lead. On Lap 15, he found it and kept it until his first green-flag pit stop for four tires. Upon returning to the track, he quickly found third place by Lap 44, and 21 laps later he was back in the lead until a second green-flag pit stop on Lap 81. He returned to the track inside the top five, but fell outside of the top 10 by Lap 90. On Lap 111, however, he was already back in third, with Hendrick Motorsports yet again running first through fourth. After a two-tire, green-flag pit stop on Lap 120, Earnhardt returned to the track as the leader once again. However, his team was penalized for a crew member over the wall too soon, sending Earnhardt on a pass-through on pit road. That sent him back to 27th and far behind the pack to draft. However, a car going up in smoke caused a caution on Lap 132, allowing Earnhardt to catch back up with the pack for the ensuing restart. He lined up 16th when the race when green once again, and was knocking on the door of the top 10 by Lap 141. On Lap 146, thanks to a move to the middle, he leaped all the way to fifth. With 38 laps to go in the race, he found the lead once again. He headed to pit road for one final green-flag stop from the lead, but his tires smoked on the way onto pit road, forcing a fuel-only stop to include a two-tire change. That dropped Earnhardt back in the standings, and he did not find the top 10 until 12 laps were remaining, looking to make a move. He made one, nearing the top five with 10 laps remaining. For the green-white-checkered finish, Earnhardt lined up second, and when a caution flag waved and ended the race, NASCAR checked the scoring, ultimately giving the win to Logano and scoring Earnhardt second.