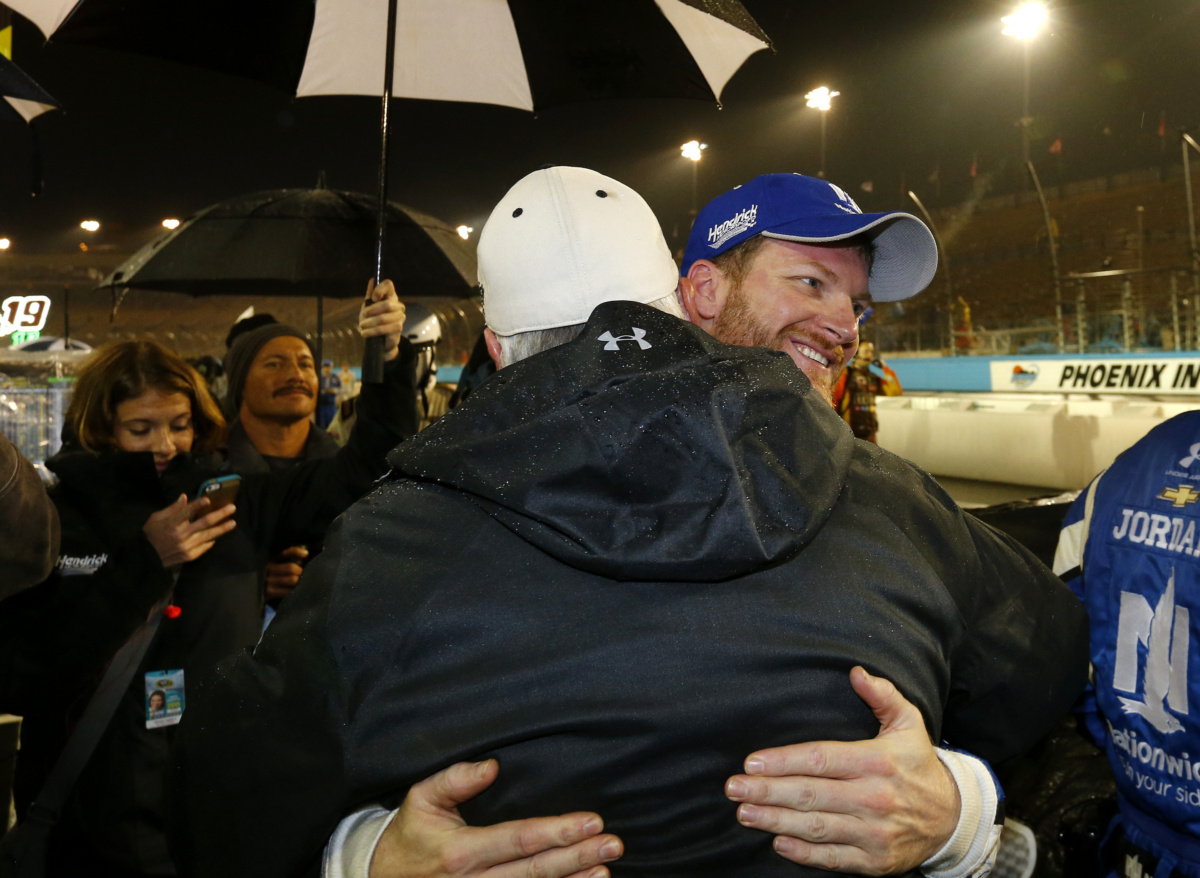 AVONDALE, Ariz. – Rain was firmly in the spotlight Sunday at Phoenix International Raceway, and by the end of the night, Dale Earnhardt Jr. was in Victory Lane.

The race was delayed more than six hours due to inclement weather, and ultimately rain cut the event short – but Earnhardt had worked his way to the front of the grid and earned the win.

"You like to win them at the checkered flag," Earnhardt said. "A win's a win, though."

The win gave Hendrick Motorsports a clean sweep of the Eliminator Round of the Chase for the NASCAR Sprint Cup – three consecutive victories.

Jimmie Johnson and Jeff Gordon – the other two race-winners in the organization’s current streak – joined Earnhardt in the top 10 in fifth and sixth, respectively.

Below is a detailed look at how the four Hendrick Motorsports drivers fared Sunday at Phoenix.

KASEY KAHNE, NO. 5 FARMERS INSURANCE CHEVROLET SS
FINISHED: 26th
STANDINGS: 18th
RECAP: Rolling off the grid ninth, Kahne maintained that position when the competition caution came at Lap 40. But due to a pit-road issue, Kahne returned to his stall a second time for repairs and fresh tires, returning him to the track in 30th. He jumped up to 27th by Lap 64, but on Lap 93 lost a lap to the leader. He kept battling, and a speedy performance by the No. 5 team during a green-flag pit stop helped Kahne jump up to 25th by Lap 140. “We’re the fastest car a lap down – let’s get up there,” No. 5 team crew chief Keith Rodden told Kahne on the radio. Kahne continued to run 25th, and after another green-flag pit stop, he found himself 26th when a caution flag waved around Lap 195. When a red flag was displayed for rain prior to the restart, that is where Kahne would be scored.

JEFF GORDON, NO. 24 PEPSI CHEVROLET SS
FINISHED: 6th
STANDINGS: 2nd
RECAP: Starting Sunday’s race just outside the top 10, Gordon couldn’t quite jump past 11th place before the competition caution at Lap 40. However, a quick pit stop by the No. 24 team allowed Gordon to restart 10th on Lap 48. The No. 24 Pepsi Chevrolet SS took four tires while several other competitors took just two. He quickly moved up to seventh by Lap 64, which is where he would stay until a cycle of green-flag pit stops. On Lap 125 when the field had cycled back through pit road, Gordon found himself in fifth. He continued racing in fifth until another cycle of green-flag pit stops began. Gordon moved into the race lead as competitors headed to pit road, and when a caution flag flew, Gordon had yet to pit. He came to pit road under caution and returned to the track in sixth. When a red flag was displayed for rain prior to the restart, Gordon was scored with the sixth-place result. He will advance as one of four drivers racing for a championship at Homestead-Miami Speedway.

JIMMIE JOHNSON, NO. 48 LOWE’S PATRIOTIC CHEVROLET SS
FINISHED: 5th
STANDINGS: 12th
RECAP: Starting from the pole position, Johnson lost the lead to a competitor, but the competitor was hit with a penalty for jumping the restart, giving Johnson the lead once again. However, during the competition caution that was thrown on Lap 40, Johnson was penalized for speeding on pit road. That meant he restart in 29th on Lap 48, but by Lap 64 he was inside the top 20. That became the top 15 on Lap 93, and after a cycle of green-flag pit stops, Johnson re-entered the top 10 on Lap 130. By the time green-flag pit stops began, Johnson had moved up to seventh, which became second as competitors headed to pit road but Johnson stayed on the track. When a caution flag waved on Lap 195, Johnson made his own pit stop and returned to the track in fifth. When a red flag was displayed for rain prior to the restart, Johnson was awarded the top-five result.

DALE EARNHARDT JR., NO. 88 NATIONWIDE CHEVROLET SS
FINISHED: 1st
STANDINGS: 7th
RECAP: Beginning Sunday’s race in third, Earnhardt moved to second place by Lap 8. After a competition caution, Earnhardt lined up fourth for the restart, but within two laps he was once again the race’s runner-up. He briefly lost a position on Lap 100, but 10 laps later made it back up before making a green-flag pit stop. When the field had cycled through on Lap 125, Earnhardt was back in third. He continued riding in third until a cycle of green-flag pit stops. Earnhardt was on pit road when a caution flag flew on Lap 195, and he made it to the line before the leaders, setting himself up as the race leader for the ensuing restart. When a red flag was displayed for rain prior to the restart, Earnhardt earned the victory.