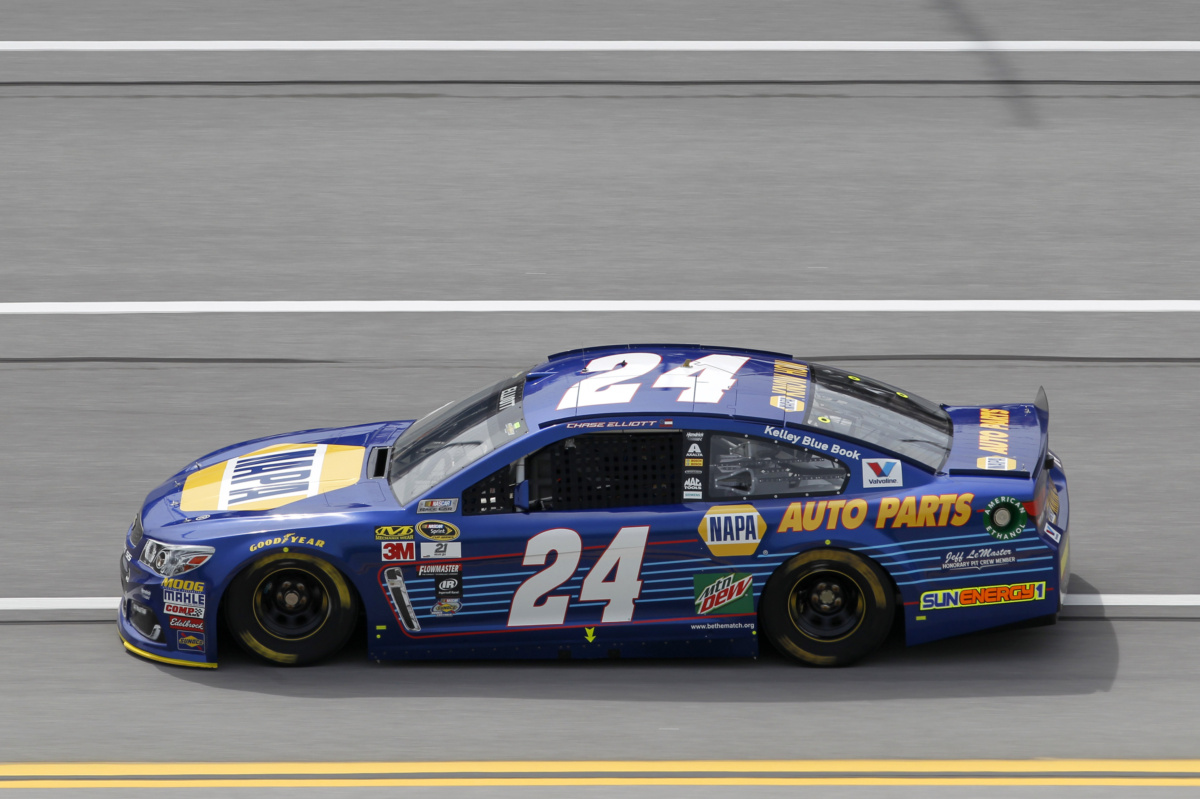 TALLADEGA, Ala. – Sunday at Talladega Superspeedway was defined by multi-car incidents.

Chase Elliott navigated through the trouble to take home fifth place -- his third top-five finish in the past four races.

His teammates weren’t as lucky.

First, Dale Earnhardt Jr. spun and made contact with Kasey Kahne, sending both cars to the garage.

Earnhardt noted that it was the "same thing" that happened to him in the Daytona 500.

"The car wasn't driving real well," he said. "It just pinned the nose."

"I saw the 88 went left and then he came back right spinning in front of me," Kahne recalled. "I didn't have anywhere to go."

Both Earnhardt and Kahne were able to return to the track, but both were involved in second incidents later in the race that officially ended their days.

Kahne and Earnhardt were scored 39th and 40th, respectively.

Jimmie Johnson was also involved in two separate incidents. He was able to return to the track on the lead lap after the first, but the second, which involved approximately 20 competitors, sent him to the garage.

He returned to the track once again and ultimately finished 22nd.

Below is an in-depth look at how the four Hendrick Motorsports teammates fared Sunday at Talladega.

KASEY KAHNE, NO. 5 FARMERS INSURANCE CHEVROLET SS
FINISHED: 39th
STANDINGS: 17th
RECAP: Rolling off the grid just outside of the top 10 in 11th, Kahne jumped up to seventh by the end of the first lap. He found the top five by Lap 18, and moved as far as second on Lap 38 as competitors began to make green-flag pit stops. After a four-tire pit stop one lap later, Kahne returned to the track outside of the top 15 but began working his way back through the pack behind teammate Earnhardt. However, on Lap 50, Earnhardt spun just in front of Kahne, which sent the No. 5 Farmers Insurance Chevrolet SS to the garage for repairs. “We had a great Farmers Insurance Chevrolet,” Kahne said. “I felt really fast.” He returned to the track under caution at Lap 96 in 39th, down 45 laps. With 61 laps remaining, Kahne was involved in a single-car incident that ended his race day. He was scored 39th.

CHASE ELLIOTT, NO. 24 NAPA AUTO PARTS CHEVROLET SS
FINISHED: 5th
STANDINGS: 11th
RECAP: Starting on the pole position, Elliott held onto the lead on the first lap of the race and led 13 before a battle for the lead shuffled him further back in the top 10. He kept battling, however, and regained the lead just before Lap 30. He headed to pit road from the lead for a green-flag stop, but when he returned to the track, he lost the draft and fell back to 14th. A speedy pit stop during the first caution of the race on Lap 50 put him back inside the top 10, however. By Lap 73, he had pushed back up to the runner-up position, and during the stretch of racing through the halfway point of the race, he was involved in what amounted to three-wide drag racing behind the leader, moving in and out of the second position. At halfway, Elliott found himself in second, and after a caution was called on Lap 96, he led the field off of pit road. He restarted second, however, as a competitor stayed on the track – but he retook the lead right away on the restart. He was moved to the outside, however, and fell back outside of the top 10. With 33 laps remaining, Elliott found himself in 30th, but after avoiding a multi-car incident, he was battling inside the top 15 once again with 22 laps remaining. After staying away from another multi-car incident, Elliott found himself ninth with three laps remaining. He kept pushing toward the front and finished fifth.

JIMMIE JOHNSON, NO. 48 LOWE’S CHEVROLET SS
FINISHED: 22nd
STANDINGS: 4th
RECAP: Johnson began Sunday’s race already inside of the top five, and by the end of Lap 1 he had jumped up to third. On Lap 8 he lost the draft with his teammates and was shuffled back in the pack, ultimately falling outside of the top 30. But he worked his way back inside the top 10 by Lap 47 thanks in part to a speedy green-flag pit stop. On Lap 73, Johnson radioed that the “car is driving awesome” after some adjustments during a pit stop during a caution. He continued pushing inside of the top 10 toward the top five, finding seventh at the halfway point of the race. On Lap 96, however, he was involved in a multi-car incident that sent him to pit road for repairs. He was able to return to the track immediately, however, restarting 30th. He continued battling, moving all the way up to the fifth position when he was involved in another multi-car incident that could be considered “the big one” with 28 laps remaining. It sent the No. 48 Lowe’s Chevrolet SS to the garage but he was once again able to return to the track. He ultimately finished 22nd..

DALE EARNHARDT JR., NO. 88 NATIONWIDE CHEVROLET SS
FINISHED: 40th
STANDINGS: 8th
RECAP: Earnhardt started Sunday’s race just behind teammate Elliott in the third position, and by the end of the first lap he had leapfrogged to second place. A run by a line of competitors shuffled him back in the pack just before the 10th lap of the race, and while he fell as far back as 30th he jumped back into the top 15 and continued to climb before his car got loose and spun to cause a caution on Lap 50. Earnhardt reported that the No. 88 Nationwide Chevrolet SS had been “real loose” as he drove it to the garage for repairs. He returned to the track on Lap 96 under caution, down 46 laps in 40th. On Lap 110, however, a competitor ran into the No. 88 Chevy, causing another caution and ending Earnhardt’s race day. He was scored 40th.