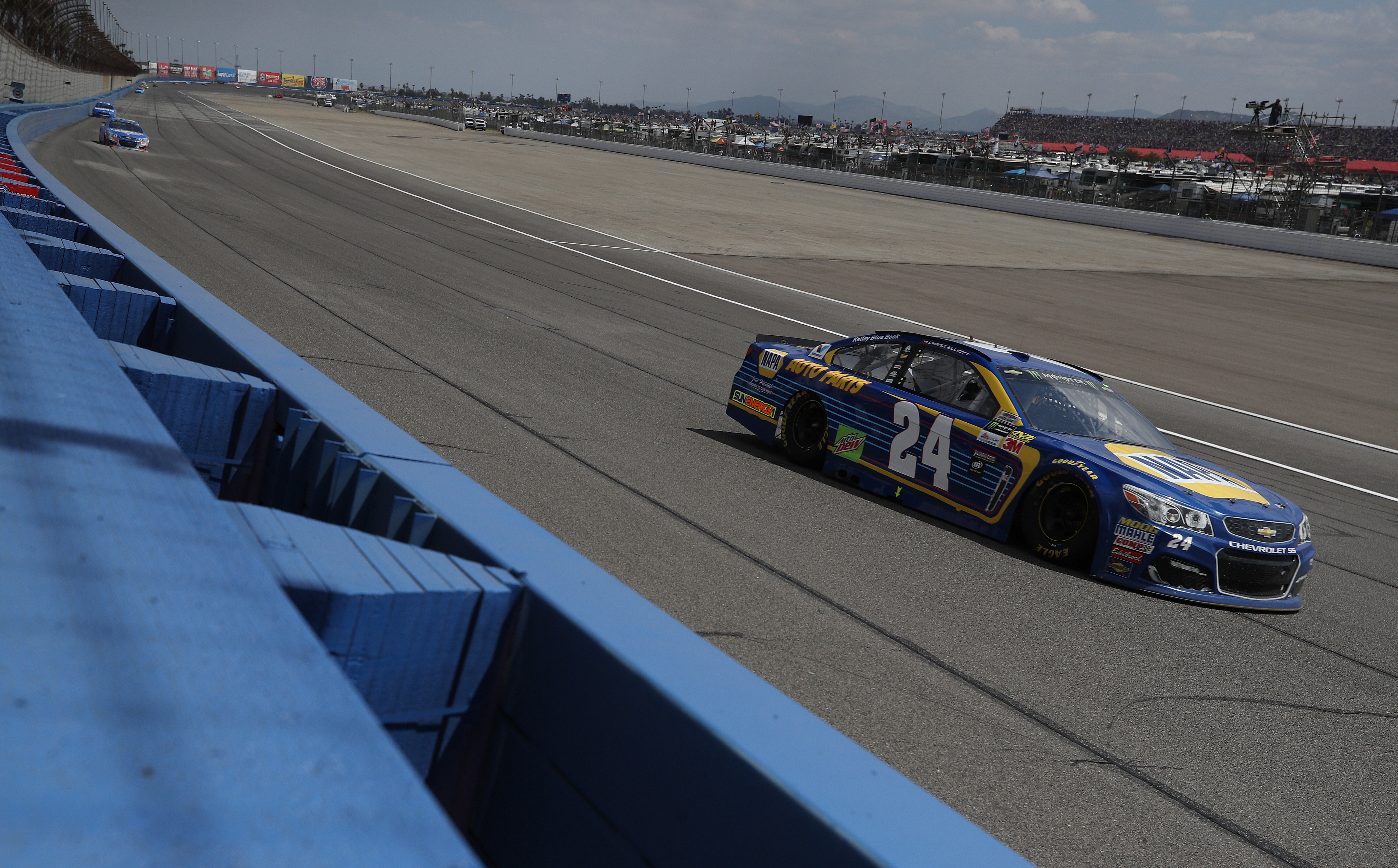 FONTANA, Calif. – It took overtime to decide it Sunday in Fontana, California, and Chase Elliott led his teammates to the checkered flag with another top-10 finish.

The driver of the No. 24 NAPA AUTO PARTS Chevrolet SS finished 10th, with Dale Earnhardt Jr. the next of his Hendrick Motorsports teammates to cross the finish line in 16th.

Below is a look at how all four Hendrick Motorsports drivers fared Sunday in California. A recap from Stage 1 can be found here and a closer look at Stage 2 can be seen here.

KASEY KAHNE, NO. 5 FARMERS INSURANCE CHEVROLET SS
FINISHED: 20th
RECAP: Kahne led his teammates to the green flag Sunday in 12th, and after spending the majority of Stage 1 inside the top 10, finished the segment just outside of it in 11th. In Stage 2 he remained inside the top 15, finishing 15th. The final stage began with Kahne in 16th as he reported that he continued to battle the handling of the No. 5 Farmers Insurance Chevrolet SS. After a green-flag pit stop with 46 laps to go, Kahne found himself in 18th as the last car on the lead lap when the field cycled through. After a caution flag waved with 21 laps to go, Kahne lined up 12th for the restart. He pushed back into the top 10 for a restart with less than 10 laps to go after another caution, but when yet another yellow flag waved to send the race to overtime, the No. 5 Farmers Insurance Chevrolet SS received some right-front damage that needed to be repaired. Kahne took the checkered flag in overtime in 20th.

CHASE ELLIOTT, NO. 24 NAPA AUTO PARTS CHEVROLET SS
FINISHED: 10th
RECAP: Elliott started Sunday’s race just behind Kahne in 13th, and it didn’t take long for the driver of the No. 24 NAPA AUTO PARTS Chevrolet SS to drive his way toward the front. He finished Stage 1 in third – and maintained that position at the end of Stage 2 after making a late-segment pass. He began the final stage in fourth after a four-car pit stop and continued to race inside the top five until a green-flag pit stop with 47 laps remaining. When the field cycled through, he found himself in fourth but jumped back up to third on Lap 168. With 22 laps remaining, Elliott headed back to pit road for another green-flag stop and fresh tires, but one lap later a caution flag flew, trapping him a lap down. He was the beneficiary of the free pass, however, and restarted 17th after pitting again for four fresh tires. He worked his way back to the top 10 before a caution flag sent the race to overtime. He held that position in overtime, taking the checkered flag in 10th.

JIMMIE JOHNSON, NO. 48 LOWE’S CHEVROLET SS
FINISHED: 21st
RECAP: Taking the green flag Sunday in a backup car, Johnson began the race near the rear of the field, but in Stage 1 he made quick work of the back half of the field, moving up to 20th. With seven laps to go in the stage, however, he was lapped by the leader and fell off the lead lap. He finished Stage 2 still a lap down in 21st. He began the final stage back in 20th, but during a green-flag pit stop with 44 laps to go, he lost time while trying to avoid making contact with a competitor on pit road. That cost him another lap, and he returned to the track two laps down in 24th. When a caution flag waved with 21 laps to go, Johnson earned a lap back on a wave-around, restarting 23rd down one lap. A caution with three laps remaining gave Johnson another free pass to return to the lead lap, and in overtime he gained more position to take the checkered flag in 21st.

DALE EARNHARDT JR., NO. 88 AXALTA CHEVROLET SS
FINISHED: 16th
RECAP: Earnhardt made his 600th career NASCAR Cup Series start from the rear of the field after the No. 88 team needed to replace a tire with a cut in it. But like his teammate Johnson, he made quick work of the back half of the field in Stage 1, finishing the segment in 17th. He continued his push toward the front in Stage 2, finishing 12th. After an extended pit stop before the final stage, Earnhardt took the green flag 17th and remained on the lead lap through long stretches of green-flag racing. After a green-flag pit stop with 48 laps to go, he found himself in 15th when the field cycled through. When a caution flag waved with 21 laps to go, Earnhardt took four fresh tires on pit road and took the green flag for the restart still in 15th.  He continued pushing forward through multiple more caution flags, including one that sent the race to overtime. On the last lap, with Earnhardt battling on the verge of the top 10, he got caught behind a competitor that had made contact with the wall and ultimately took the checkered flag 16th.