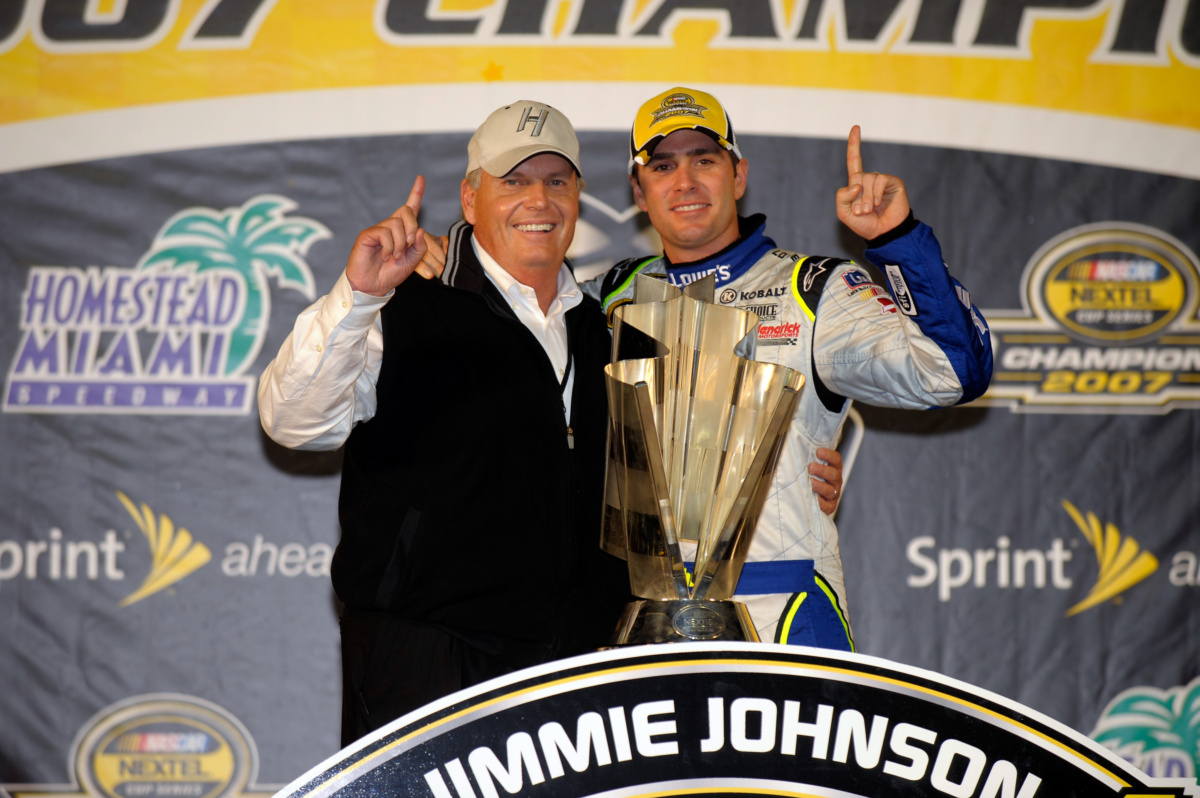 HOMESTEAD, Fla. – Future generations of NASCAR historians and fans will marvel at the meteoric rise of Jimmie Johnson’s career, which reached another level of excellence Sunday night when he clinched his second consecutive NASCAR NEXTEL Cup championship at Homestead-Miami Speedway.

The driver, who debuted at Lowe's Motor Speedway on Oct. 7, 2001, took just 219 races to enshrine himself with names like Petty, Earnhardt, Gordon, Allison and others among NASCAR royalty.

“I cannot put into words what I am feeling right now,” said Johnson, who finished seventh in Sunday’s race enabling him to nip teammate Jeff Gordon, who finished fourth, by 77 points in the 2007 “Chase for the NEXTEL Cup.”

Sunday’s race concluded a spectacular 2007 season that saw Johnson and his Hendrick Motorsports team post 10 victories, moving his career total to 33 and into a tie with Fireball Roberts for the 18th-most wins.

“This trophy represents so much hard work by so many people and is the culmination of so many dreams of mine and others that’s its almost impossible to talk about,” said Johnson.

“There are so many people to thank. Rick Hendrick, Lowe’s, my teammates -- the list is endless, but I am very appreciative of all that people have done for me in this sport and in life.”

On Sunday, Johnson started from the pole, led the first lap and never ventured outside the top 10. Afterward, he admitted he was points racing to preserve his 89-point lead, but he doubted he could have ever caught event winner Matt Kenseth.

After the race, Johnson speculated he could have finished in the top three, but common sense took over late in the race.

“So the racer in me, I was trying to pass [Martin Truex] on the last lap, and then I'm like, 'What are you trying to do?' Just stop. It's tough to not go. But it was a balance of putting up a strong performance tonight and finishing the season up right.”

The seventh-place finish might have ended Johnson’s streak of four consecutive victories, but it was good enough to secure a place in NASCAR history.

“I love that we are going to be in record books,” Johnson said. "I think our team, and Chad and I, we like to go out and let our stats speak for ourselves. That's been my style and the way we've done things all along.

"We'll leave the opinions to everyone else, and hope that our record speaks for itself. We'll work hard, and do everything we can to win races and championships."

Nobody expected Johnson and his Hendrick Motorsports team to equal last season’s title that included five victories, highlighted by wins at the Daytona 500, Talladega and the Brickyard 400. But 2007 turned out to be even better. His 10 victories topped the most of any driver and his surge in the final third of the season included victories in six of the last 12 races.

In the Chase, Johnson posted an average finish of 5.0 while Gordon’s was 5.1.

“It's absolutely phenomenal,” said crew chief Chad Knaus. “I'm very proud and very pleased of what we were able to accomplish. And the 24 and 48 shop this year, it's amazing what can happen when you have a group of 92 guys that are going out there and not so much racing against once another, but racing against the competition. That is really what this team did this year.”

Car owner Rick Hendrick knew one of his drivers would win the title and the other would finish second. But both deserved credit for the overall performance of the team.

“It's unbelievable,” he said. “You dream about winning one of those, and doing it back-to-back, it's really special.

"To have the two cars run like this all year it's great. I think the most gratifying thing to me was during the race and after the race the way [Gordon's team] handled it.

"I told [both teams] before the race that I was going to the guy that finished second first, and I did. And everybody just, they're happy for each other, and it's been a great night."

With two trophies sitting in his trophy case, the question now is will Johnson duplicate Cale Yarborough’s feat when he won three consecutive titles in 1976-78?

Johnson isn’t ready to rule it out.

"The good thing, I feel, is we're just really hitting our stride," he said. "I think we have a lot of good years ahead of us, and we'll be fighting for more championships and certainly winning more races as years go by. Hopefully, we can be a three-time champion in the near future."

"I just don't see anything that is going to slow Jimmie down," Hendrick said. "He just gets better every time I see him get in the car."

But for now, there's a second championship to celebrate and a fulfilled dream to enjoy.

"And to be here racing on the main stage of NASCAR, and to have the success of the championships means the world to me. It is something I'm very, very proud of, and thankful of as well. And thankful for the relationships and friendships that I have.

"I look forward to the future; a lot of good times ahead of us."