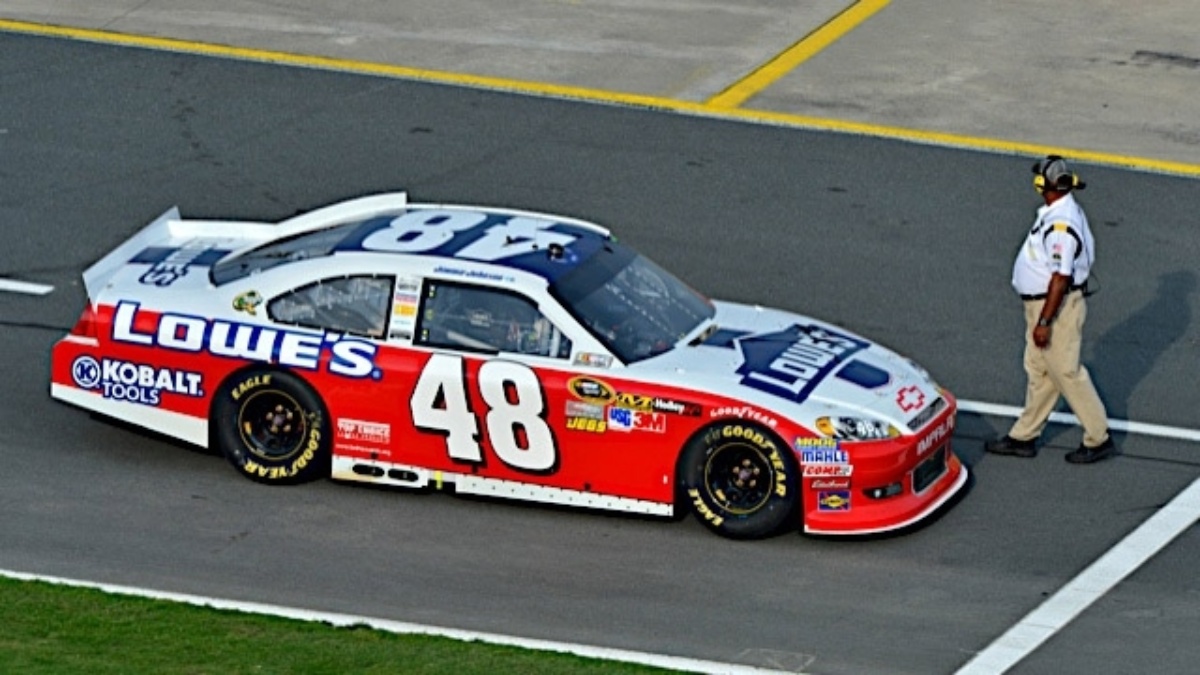 Jeff Gordon will roll off the grid 23rd in Sunday's event, which will begin at 6 p.m. ET on FOX.

In 56 events (187 starts) at Charlotte, Hendrick Motorsports has 16 wins, which ranks as the best all-time among teams at the 1.5-mile oval. Johnson owns six of those victories, which ties him for most wins all-time at Charlotte with NASCAR Hall of Famers Bobby Allison and Darrell Waltrip. Gordon’s five wins tie him for second all-time. Hendrick Motorsports has 49 top-five finishes and 75 top-10s and has led 3,829 laps at Charlotte since 1984. Johnson most recently won this race from the pole position in October 2009.

Kasey Kahne, driver of the No. 5 Quaker State Chevrolet
Qualified:  Seventh.
At Charlotte: In 16 Cup starts at Charlotte Motor Speedway, Kahne has earned three wins, six top-five finishes and eight top-10s. His three victories and 711 laps led at the 1.5-mile oval are personal bests for the driver of the No. 5 Quaker State Chevrolet. Kahne has a driver rating of 94.8, ranking him fourth among active drivers during points-paying events at Charlotte in the last seven years.
Most recently: Kahne extended his top-10 streak by finishing eighth at Darlington (S.C.) Raceway on May 12. The race marked his fifth consecutive top-10 finish, a career best. His performance at the Southern 500 moved him up three spots to rank16th in the driver standings. Kahne followed his strong run at Darlington by placing ninth in the non-points paying NASCAR Sprint All-Star Race at Charlotte last weekend.
Kahne says: “Charlotte has been a great track for us during my career.  We tend to put together strong races there.  It was great to be fast at the All-Star race, even in a backup car.  I think we learned a lot during practice and the All-Star race that will help us this weekend.  But the 600 is a really long night.  We have to keep making good adjustments and be consistent.”

Jeff Gordon, driver of the No. 24 Drive to End Hunger Chevrolet
Qualified: 23rd.
At Charlotte: Gordon owns five wins, eight pole positions, 16 top-five finishes and 20 top-10s in 38 starts at Charlotte. The driver of the No. 24 Drive to End Hunger Chevrolet has led 672 laps at the site of his first Cup victory. Gordon’s driver rating of 86.9 ranks him 10th among active drivers in the past 14 races at Charlotte.
Most recently: Gordon ran all 90 laps of the All-Star Race in the top-15 at Charlotte Motor Speedway last weekend. He ran as high as fourth in his No. 24 Chevrolet before ultimately finishing 13th. Gordon currently ranks 24th in the driver standings.
Gordon says: "We experimented with some things last week, and we'll definitely explore more of that setup (we used in the All-Star event) this week. It showed good speed at times. We just need to get the balance a little bit better. We need points and we need wins, so the 600 is far more important to us (than the All-Star race). It's a long race Sunday and a lot can happen. And I think that suits us. I think a long race is one of our strong points."

Jimmie Johnson, driver of the No. 48 Lowe’s Patriotic Chevrolet
Qualified: Third.
At Charlotte: Johnson has earned six wins, 10 top-five finishes, 14 top-10s and three poles in 21 starts at Charlotte. With a driver rating of 111, the driver of the No. 48 Chevrolet ranks first among active drivers in the past 14 races at the 1.5-mile track. Johnson also ranks first for fastest laps (451), laps in the top-15 (4,201) and average starting position (6.5).
Most recently: Johnson earned Hendrick Motorsports’ 200th Cup victory at Darlington Raceway on May 12. The driver of the No. 48 Chevrolet went on to sweep the non-points paying events last week winning the Sprint Pit Crew Challenge and the All-Star Race. Johnson has improved three spots in the driver standings to rank fifth.
Johnson says:  “We are really pleased with where our cars are right now.  I have been sitting up here telling all of you that we are close and it is coming and look at the laps led and all that stuff.  I’m glad to be able to back up what I have been talking about over these last few months.  It really just boils down to the hard work that has come through the engine shop, chassis shop, our engineering staff and the crew chiefs.  We have a better product this year. We have been able to be close to victory lane a few times so far this year and then we got it done the last two weeks.  Obviously, winning during the All-Star race is very helpful it’s a great starting point to come back with.  We are excited to get on the track today and through the course of the weekend.  We feel like we will be a threat for the win.”

Dale Earnhardt Jr., driver of the No. 88 National Guard An-American Salute/Diet Mountain Dew Chevrolet
Qualified: 12th.
At Charlotte: In 25 Cup starts at Charlotte, Earnhardt has amassed five top-five finishes and 10 top-10s. He earned his first career Cup pole position at his hometown track during his 2000 rookie year. Earnhardt has completed 94.9 percent of all laps he's attempted (8,465 laps of 8,918 total) at the 1.5-mile oval, 324 of which he’s led.
Most recently: Earnhardt led all 40 laps of the NASCAR Sprint Showdown event prior to the All-Star Race on May 19. The driver of the No. 88 Chevrolet went on to win the fourth segment of the All-Star race before finishing fifth behind Johnson. His performance at Darlington on May 12 helped Earnhardt maintain his third-place spot in the driver standings.
Earnhardt says: “We feel good about getting started this weekend. It’ll be a little bit different; but variables like weather and how much rubber is on the race track and things like that. I’m just ready to go get in the car. I think we’re going to work on qualifying trim today. I don’t think we’ll do any race runs, so we won’t really know exactly what kind of race car we’ve got until Saturday. But, I’m just ready to get the weekend going so we can get closer to the race.”