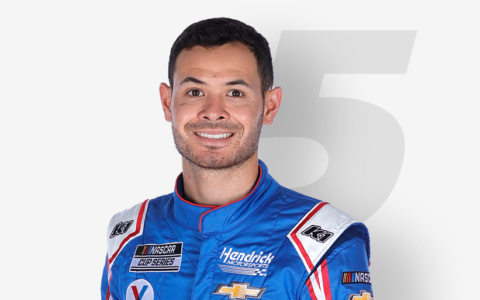 The 2021 season marks the first year for Kyle Larson as a driver for 13-time NASCAR Cup Series champions Hendrick Motorsports. It was announced in October 2020 the 28-year-old would partner with crew chief Cliff Daniels in the No. 5 Chevrolet Camaro ZL1 1LE, marking the return of the organization’s flagship car number.

Larson, a six-time winner in NASCAR’s premier series, is half Japanese and the only Asian-American to regularly compete in NASCAR. He is the first NASCAR Drive for Diversity graduate to race full-time at the Cup level and now serves as a mentor for the program. Since 2018, he has been a volunteer with the Urban Youth Racing School in Philadelphia, which helps expose students of color to motor sports. In May 2020, Larson also began working with the Minneapolis-based Sanneh Foundation to advance diversity, equity and community well-being.

The Elk Grove, California, native has won more than 250 events across a variety of sanctioning bodies and vehicle styles. Larson began driving at age 7 and has raced stock cars, winged and non-winged sprint cars, karts, trucks, and sports cars.

In 2012, Larson was signed by Earnhardt Ganassi Racing as a developmental driver. He secured two victories, eight top-five finishes and 12 top-10s in 14 races en route to winning the championship in the K&N Pro Series East, a feeder circuit to NASCAR’s national-level touring series. The following year, he competed full-time in NASCAR’s version of Triple-A, the Xfinity Series, capturing nine top-five finishes and 17 top-10s in 33 starts and an eighth-place ranking in the final point standings.

Larson also made his NASCAR Cup Series debut in 2013, starting 21st and finishing 37th after his No. 51 entry experienced engine issues at Charlotte Motor Speedway. He made three more Cup starts that season before competing full- time in the series the next year.

Driving for Chip Ganassi Racing, Larson won 2014 Cup Series rookie of the year honors with eight top-five finishes and 17 top-10s in 36 starts. He finished 17th in the final standings and won his first pole position in NASCAR’s highest division, setting the fastest time in qualifying at Pocono Raceway.

During his sophomore season of 2015, Larson notched two top-five finishes and 10 top-10s in 35 starts to finish 19th in the standings. He also participated in the Rolex 24 at DAYTONA with co-drivers Scott Dixon, Tony Kanaan and Jamie McMurray, winning overall in only his second attempt in the storied “twice around the clock” endurance sports car race.

Larson’s first trip to victory lane in the NASCAR Cup Series occurred in August 2016 when he led the final 10 laps at Michigan International Speedway to capture the checkered flag. Along with that victory, Larson recorded 10 top-five finishes and 15 top-10s to rank ninth in the final standings.

The breakout year for the Chevrolet driver occurred in 2017. Larson led a race-high 110 laps from the pole to triumph at Auto Club Speedway in March before winning his second consecutive Michigan event – also from the pole – in June. In August, he won his third straight race at the Michigan track before claiming his fourth win of the year at Richmond Raceway in September. Along with his victories, Larson collected 15 top-five finishes, 20 top-10s, three pole positions and led 1,352 laps to finish eighth in the final standings.

The following year, Larson finished ninth in the standings with 12 top-five finishes and 19 top-10s. He collected three pole positions and led 782 laps during the 36-race season.

Larson won the NASCAR All-Star Race at Charlotte in May 2019 while his lone points-paying victory that year occurred at Dover International Speedway in October. Overall, he tallied eight top-five finishes, 17 top-10s and posted his career-best finish of sixth in the NASCAR Cup Series standings.

In 2020, Larson turned in one of the most impressive years in the history of dirt-track racing. While primarily driving sprint cars, he crisscrossed the country and racked up an incredible 46 victories in 97 attempts. He led the World of Outlaws Sprint Car Series in victories with 12 despite competing in only 26 of its 54 events and secured his first Lucas Oil Dirt Late Model Series win in only his second start. He also collected one top-five finish and three top-10s in four Cup Series races, and, in January 2021, won the prestigious Chili Bowl Midget Nationals – Larson’s second consecutive victory in the annual dirt track event held in Tulsa, Oklahoma.

When not racing at NASCAR’s highest level or at a short track, Larson enjoys playing golf and spending time with wife Katelyn and their son Owen and daughter Audrey.