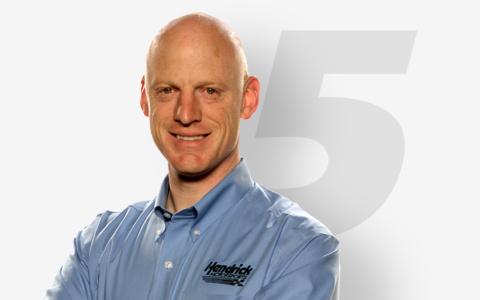 The 2017 season marks Keith Rodden’s third leading the Hendrick Motorsports No. 5 Chevrolet SS team with driver Kasey Kahne. Regarded as one of the brightest young minds in the NASCAR garage, Rodden will commence his fourth year as a NASCAR Cup Series crew chief.

Rodden is no stranger to working with Kahne. Their longstanding relationship dates back more than a decade when Rodden worked with the driver as a team engineer beginning in 2004.

In 2006, Rodden moved to Kahne’s No. 9 NASCAR Cup team and began an eight-year stretch under the tutelage of crew chief Kenny Francis that included stints at Evernham Motorsports, Richard Petty Motorsports, Team Red Bull and Hendrick Motorsports. From 2006 until 2011, he played a key engineering role as Kahne recorded 11 wins, 16 pole positions and two NASCAR Cup Series playoff berths (2006 and 2009).

In 2016, Rodden’s engineering background helped Kahne complete the most laps in a season of his career. In 2017, with his years of experience working alongside Kahne, Rodden looks forward to continuing the consistency with the team during his fifth overall season at Hendrick Motorsports.