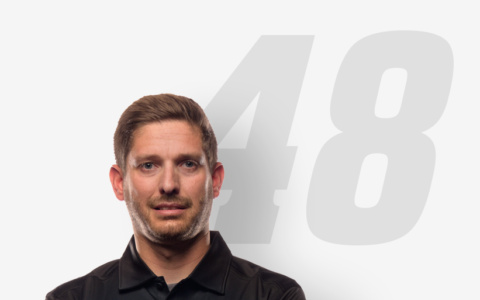 The 2022 season marks Greg Ives’ eighth as a crew chief in the NASCAR Cup Series for Hendrick Motorsports and his fifth atop the pit box with driver Alex Bowman behind the wheel. Last year, Ives and Bowman notched four wins, eight top-five finishes, 16 top-10s, a DAYTONA 500 pole position, and their fourth consecutive playoff appearance. The pair first worked together at Hendrick Motorsports in 2016 when Bowman turned heads while driving 10 races for injured Hall of Fame driver Dale Earnhardt Jr. This year, the duo will set off in the in the iconic No. 48 Chevrolet Camaro ZL1 with full-season primary partner Ally for the 38-race schedule.

Growing up in Michigan’s Upper Peninsula, Ives worked at racetracks with his father and older brother and spent eight years as a competitive driver before finding his true calling under the hood. After earning a mechanical engineering degree from Michigan Tech, Ives’ résumé ended up in the hands of Brian Whitesell, now Hendrick Motorsports’ vice president of operations, who invited the aspiring engineer to meet at Daytona International Speedway during the 2004 DAYTONA 500 race weekend. Ives drove 1,500 miles from Michigan to Florida, sleeping in his car in the process, and subsequently landed a formal interview a few weeks later. He joined the No. 24 team of four-time Cup Series champion Jeff Gordon as a shop mechanic, putting in extra hours on the setup plate and volunteering at the track whenever the team was within driving distance.

On the same day Ives found out he would be a first-time father; he was offered a traveling position as the race engineer for the No. 48 team led by legendary crew chief Chad Knaus. His arrival coincided with driver Jimmie Johnson’s historic run of five consecutive Cup championships. In seven years with the No. 48 team (2006-2012), Ives was part of 42 wins, 113 top-five finishes and 21 pole positions.

In November 2012, Ives transitioned to JR Motorsports, the NASCAR Xfinity Series team owned by Earnhardt and affiliated with Hendrick Motorsports, as crew chief for driver Regan Smith. The duo earned two victories, eight top-five finishes and 19 top-10s on their way to a third-place finish in the 2013 series standings.

Prior to the 2014 season, Ives was named crew chief for rising star Chase Elliott. That year, he guided the rookie driver to three victories, two pole positions, 16 top-five finishes and 26 top-10s en route to winning JR Motorsports’ first Xfinity Series championship. Elliott became the youngest champion in series history and the first NASCAR driver ever to win a national series title and rookie of the year in the same season.

Following his historic run in the Xfinity Series, Ives returned to Hendrick Motorsports – this time as crew chief for Earnhardt, the two-time DAYTONA 500 winner and NASCAR’s perennial most popular driver. In 2015, Ives earned his first Cup victory as a crew chief on May 3 at Talladega Superspeedway. That season, he led Earnhardt to three wins and helped the driver tie his personal records for top-five finishes (16) and top-10s (22).

In his first Cup season, Ives received the 2015 MOOG Problem Solver of the Year award, which is presented to the crew chief who posts the best overall performance, most consistently demonstrates problem-solving excellence, and wins the most Problem Solver of the Race awards. The weekly awards recognize the crew chief whose car posts the largest increase in average lap speed from the first half to the second half of the race while finishing on the lead lap. Ives earned the distinction five times.

In 2016, Ives guided the No. 88 team through a season of highs and lows as Earnhardt, who was in solid position to make his sixth consecutive Cup Series playoff appearance, missed the final 18 races while recovering from a concussion. Gordon (eight races) and young talent Bowman (10 races) filled in, with Bowman earning the pole position and nearly winning at Phoenix Raceway after leading 194 laps. All totaled, the No. 88 team earned 11 top-10 finishes with three different drivers in 2016 under Ives’ leadership.

The 2017 season marked the final of Earnhardt’s Cup Series career. The No. 88 team captured one top-five finish, eight top-10s and 16 top-15 results along with two pole positions (Daytona and Talladega). On July 20, it was announced that Ives would again be paired with the impressive Bowman – this time on a permanent basis – starting in the 2018.

The No. 88 team had a strong 2018 season with three top-five finishes, 11 top-10s and a prestigious pole award in the DAYTONA 500. In July, Ives led Bowman to a third-place finish at Pocono Raceway, which at the time was the driver’s career-best Cup Series result. The team advanced to the Round of 12 in Bowman’s first appearance in the Cup Series playoffs and ultimately finished the season 16th in the standings.

Ives led the team to a 2019 playoff berth with a victory at Chicagoland Speedway, seven top-five finishes and 12 top-10s. The Bark River, Michigan, native coached Bowman to career-best finishes in 14 different events and his second career playoff appearance that saw the driver advance to the Round of 12 after a runner-up finish at the Charlotte Motor Speedway road course. The team finished 12th in the Cup Series standings, representing a solid foundation for 2020.

In 2020, Ives and the No. 88 team captured a win at Auto Club Speedway in March after leading a race-high 110 laps to secure a coveted spot in the Cup Series playoffs. All told, the team brought home six top-five finishes, 15 top-10s and a combined 440 laps led at 10 different venues. Ives led the team into the Round of 8 for the first time in Bowman’s career and ultimately finished sixth in the 2020 playoffs. Following the conclusion of the season, teammate and seven-time champion Jimmie Johnson retired and passed the torch to Bowman and Ives, tapping the duo in to take the reigns of the No. 48 Ally team for the start of the 2021 season.

When Ives isn’t at the racetrack, he enjoys spending time with his wife, Jessica, and three children. His hobbies include working on classic cars and maintaining the property around his home in Davidson, North Carolina.