‘Biggest fan’ remembered for his passion for No. 24 team, NASCAR

Elliott reveals winning key to running well at the ROVAL

Inside the Numbers: Front-runner stats at the ROVAL

Road to the playoffs: How Hendrick Motorsports can make it to the Round of 8

CONCORD, N.C. -- Talladega Superspeedway is known for being the wildcard track in the NASCAR Cup Series circuit but that hasn’t stopped Hendrick Motorsports from becoming the winningest team at the track in the highest level of stock car racing.

Overall, the organization has 13 victories at the 2.66-mile superspeedway, an impressive feat given Talladega’s volatile nature. The track is notorious for churning out “The Big One” in almost every race, meaning a driver who was perfect all day still could get knocked out of the race.

Even with the chaos Talladega brings, seven different drivers representing Hendrick Motorsports have taken the checkered flag at the track. Take a look below to relive each of the organization’s 13 wins there and tune in this Sunday at 2 p.m. ET on NBC to see the four Hendrick Motorsports drivers try to add to that number in the Cup Series playoffs.

In just its fifth season as a Cup Series organization, Hendrick Motorsports took home its first trophy from Talladega thanks to Ken Schrader. The driver of the No. 25 Chevrolet found himself further back than he wanted to be as the final 10 laps approached, but leader Dale Earnhardt got loose and caused the drivers behind him to check up, allowing Schrader to zoom past and lead the last laps of the race.

Hendrick Motorsports had to wait nearly eight years to the day to get another win at Talladega. NASCAR Hall of Famer Jeff Gordon notched his first victory at the venue on July 28 after a shortened race due to weather and the inability to compete after the sun set. After a crash-filled day and one crucial final restart, Gordon crossed the finish line first.

The very next year after Gordon’s first Talladega win, reigning NASCAR champion Terry Labonte took the checkered flag at the Alabama track. Labonte rolled the No. 5 off sixth and took the lead five different times during the race for a total of 70 laps led. He avoided a massive 23-car pile up before taking the checkered flag for his first win of the 1997 season.

It took nearly four years for Gordon to return to victory lane at Talladega, but he did so with a bang after he started 36th at the track. Gordon weaved in and out of traffic and finally took the lead with less than five laps to go. The momentum was enough for Gordon widen his distance from second place by two car lengths to win for the second time at Talladega.

Gordon was back in victory lane at Talladega in the spring 2004 race, but it wasn’t without controversy. The four-time Cup Series champion was in the lead by half a car length in front of future teammate Dale Earnhardt Jr. when a caution was called after an accident occurred with just four laps to go. Gordon and Earnhardt had been battling for the lead at the final laps, and even though Earnhardt pulled ahead of Gordon after the accident, Gordon still was ahead of Earnhardt the moment the yellow flag dropped, solidifying his third Talladega win.

It didn’t take long for Gordon to return to the winner’s circle at Talladega. He notched his fourth win at the track after rolling off the grid second and leading a whopping 139 laps. However, in pure Talladega style, it wasn’t smooth sailing. Gordon avoided a massive 25-car pileup that halted the race for more than 40 minutes and he missed six-car accident that forced a two-lap shootout at the end of the event. Gordon held off Tony Stewart and Michael Waltrip after the final restart to win his fourth Talladega race in the last five events at the venue.

Seven-time Cup Series winner Jimmie Johnson earned his first Talladega win exactly a year to the date of Gordon’s fourth ‘Dega victory. Johnson had won the DAYTONA 500 three months earlier, proving that he could dominate at superspeedways. In a tortoise-and-the-hare situation, Johnson played the part of the tortoise and largely avoided trouble on the track, biding his patience and time. In the final 20 laps, he flew past teammates Gordon and Brian Vickers and held off Stewart for Hendrick Motorsports’ seventh Talladega win.

Despite losing out to Johnson in the spring Talladega race in 2006, Brian Vickers rebounded for the fall race and gave Hendrick Motorsports a season sweep at the Alabama track. Controversy ensued after Vickers tapped the rear quarter panel of Johnson’s Chevrolet in a bump-and-pass situation, knocking him and Dale Earnhardt Jr. out of the race on the final lap. Overall, Vickers led 17 laps in the race to earn his first Cup Series win in his career.

Gordon’s springtime dominance at Talladega returned in 2007 when he won his fifth event at the superspeedway and his 77th career victory. Once again, he beat out Dale Earnhardt Jr. and surpassed Dale Earnhardt Sr.’s NASCAR Cup Series wins record (76) on what would have been the elder Earnhardt’s 56th birthday, causing fans of the Earnhardts to boo Gordon. Despite the salty reception, Gordon led an impressive 71 laps and survived a late-race crash that caused the event to end under caution. 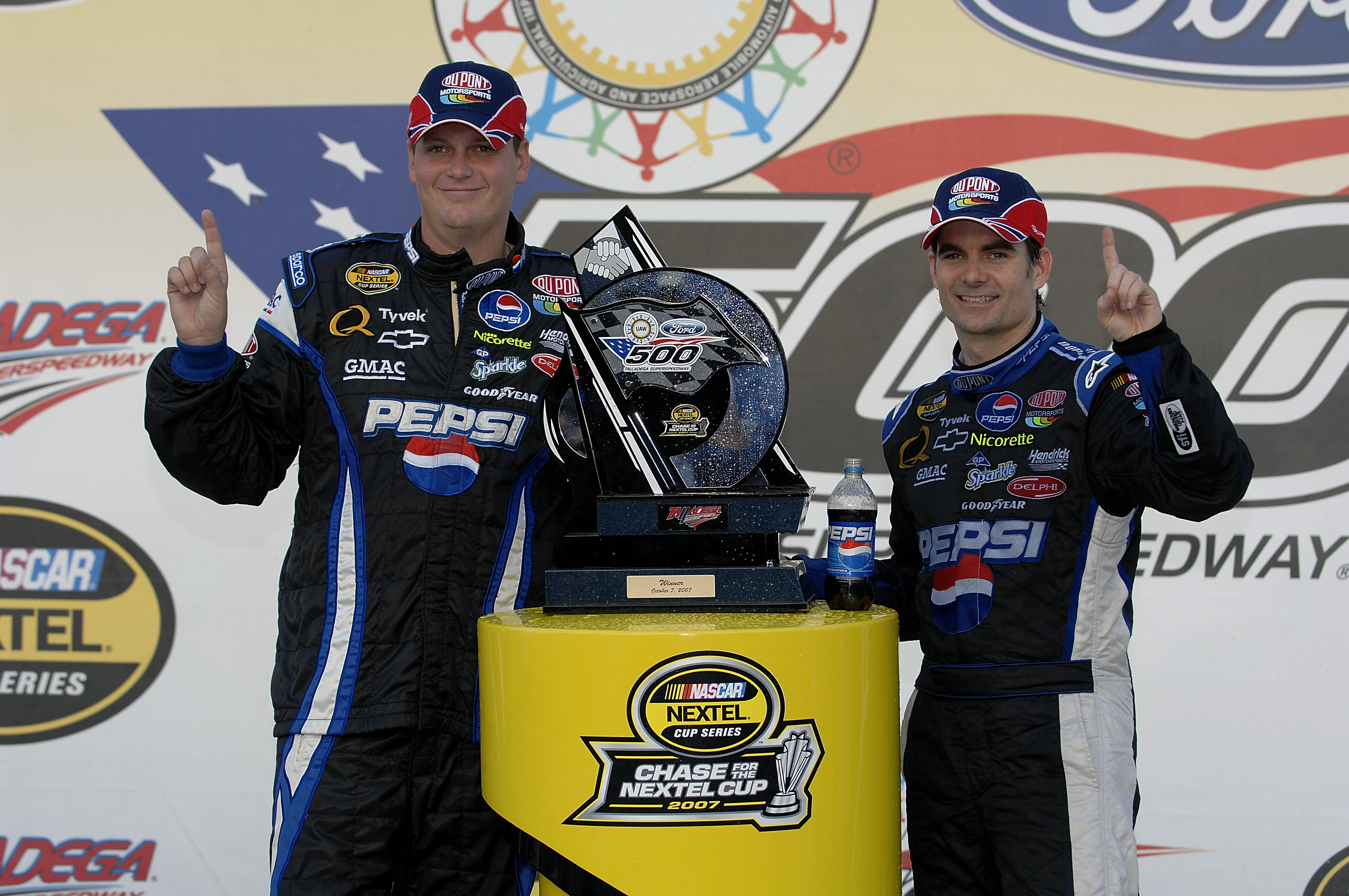 Gordon swept Talladega in 2007 after he won the October race at the superspeedway. He passed teammate Johnson on the final lap after qualifying 34th, avoiding in infamous crashes Talladega is known for. Gordon was in the middle of the pack with six laps to go when Johnson and others charged to the front. Tony Stewart gave Gordon a push into the lead and allowed him to zoom past Johnson to secure his 12th superspeedway win, surpassing Dale Earnhardt’s record. 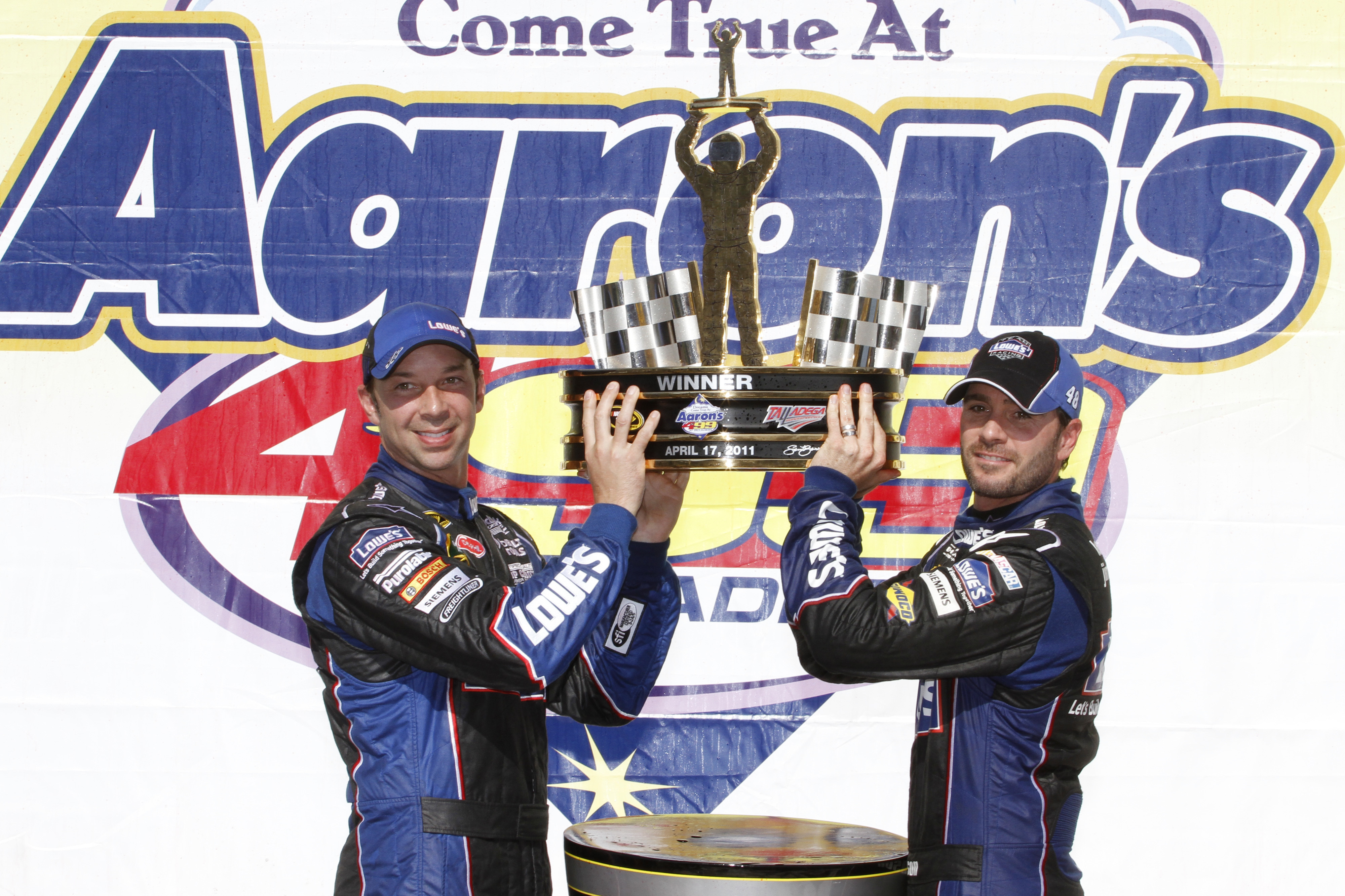 Johnson earned his second Talladega win coming of his fifth championship season in a row and was part of an impressive 1-3-4 finish by Hendrick Motorsports. Johnson was pushed by teammate Dale Earnhardt Jr. toward the end of the race after establishing a drafting alliance. The race was extremely close and the top eight cars, which featured all four Hendrick Motorsports entries, and Johnson won by a slim .002 seconds. 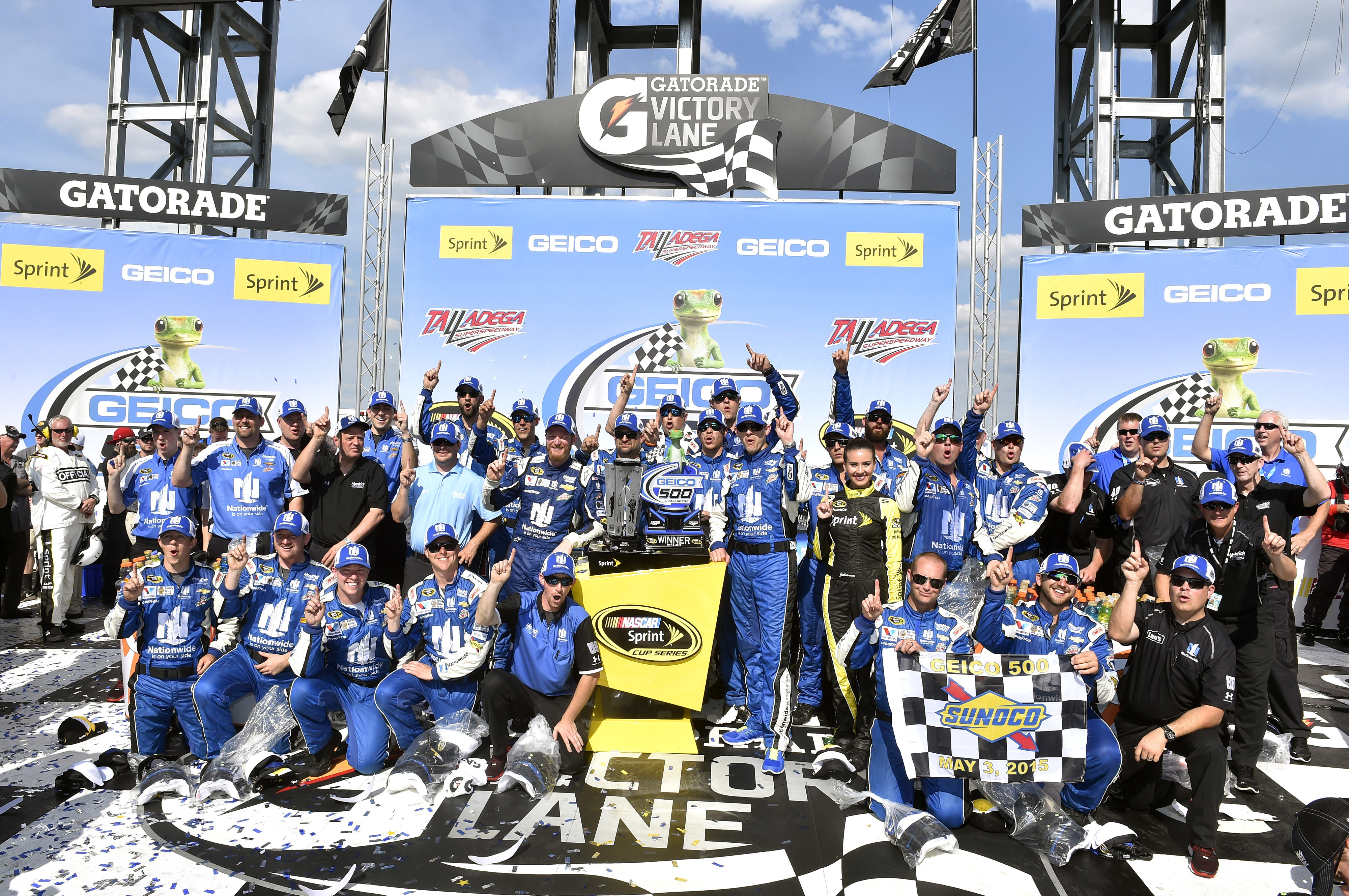 Earnhardt had posted five Talladega wins before joining Hendrick Motorsports but it was with the organization that he added to his prolific superspeedway résumé and earned his sixth win at the track, tying him with Gordon for the second-most ‘Dega victories of all time. Earnhardt led 67 laps – including the final 27 – to secure his first Talladega win in 10 years. The win came days after what would have been his father’s 64th birthday. Once again, Earnhardt and Johnson were battling for the lead with Earnhardt prevailing this time. Johnson finished closely behind in second place.

Elliott is the most recent Hendrick Motorsports winner at the 2.66-mile superspeedway, notching his fourth career Cup victory. Elliott snagged the lead on a late-race restart after a red-flag crash halted the race. He pulled away from his competitors as another accident occurred on the track, allowing him to drive away with the win. It was Elliott’s first superspeedway victory in his Cup career.