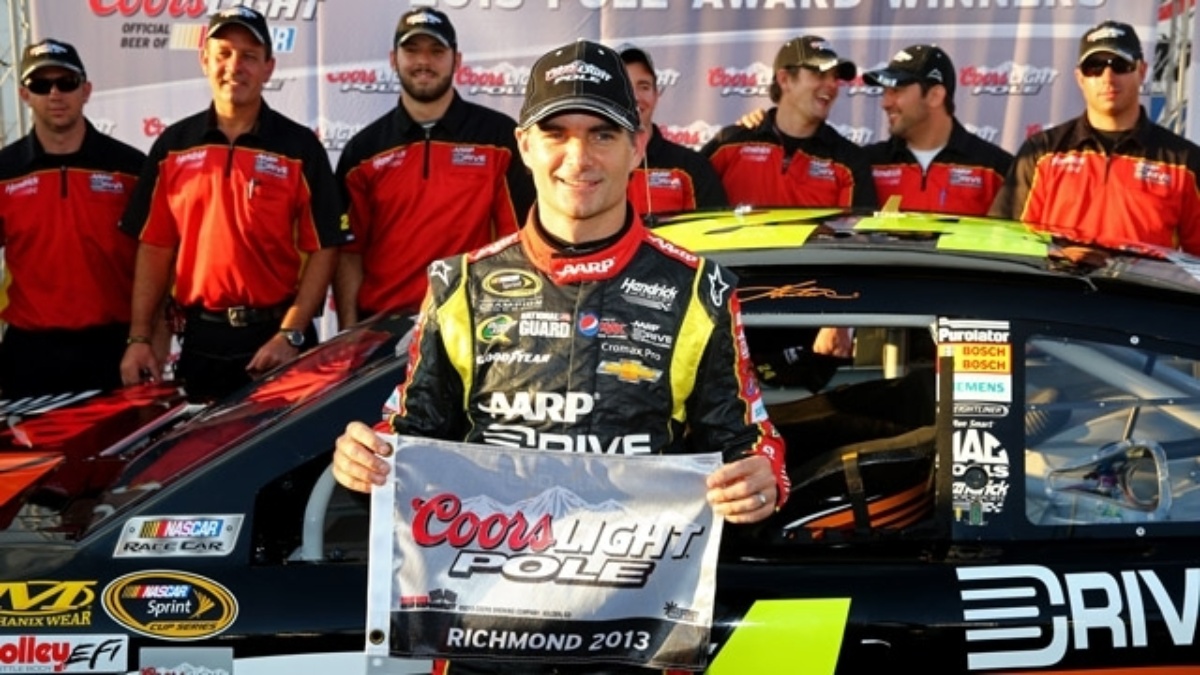 RICHMOND, Va. – Jeff Gordon earned the pole position on Friday at Richmond International Raceway after touring the .75-mile short track in 20.674 seconds at roughly 130.599 mph. He ranks 13th in the driver standings going into Saturday’s NASCAR Sprint Cup event at Richmond and needs a strong showing to qualify for the Chase for the NASCAR Sprint Cup.

“I’m excited about the day that we’ve had,” said Gordon, who now has scored a pole position in 21 straight Cup seasons. “Our car has been good in race trim and certainly good in qualifying trim. Once you start laying down a lap, you just don’t know how much further you can push it, and it did the things I wanted it to do.”

The driver of the No. 24 Drive to End Hunger Chevrolet SS now has 73 career pole positions, a stat that keeps him ranked third all-time, and he becomes the leader among active drivers at the .75-mile oval. Previously, Gordon was rank tied for first with Mark Martin at Richmond.

Coverage of Saturday night’s race is scheduled to begin at 7 p.m. ET on ESPN and MRN. Check local listings.

Kasey Kahne, driver of the No. 5 Farmers Insurance Chevrolet SS
Qualified: 18th.
Most recently: Kahne clinched at least a Wild Card spot in the 2013 Chase for the NASCAR Sprint Cup after finishing 36th at Atlanta Motor Speedway on Sept. 1. With one race remaining before the Chase begins, Kahne ranks 12th in the driver standings and is 10 points outside of the top 10. He still could race his way into the postseason, but has the cushion of a Wild Card spot going into Saturday’s event at Richmond (Va.) International Raceway.
At Richmond: In 19 Sprint Cup starts at Richmond, Kahne has recorded one win, four top-five finishes and seven top-10s. Kahne earned his first career Cup victory at the .75-mile short track in May 2005 after starting from the pole position and leading 242 laps. Kahne finished 12th in this race last season.
Kahne (On working for team owner Rick Hendrick.): “I think it starts with just how Mr. Hendrick treats people. From the top, every single person there (at Hendrick Motorsports) and the management people, all the competition side, everybody that I work with treats everybody with respect, and that starts from Mr. H. He actually cares about every single person at Hendrick Motorsports. When he's not around for a week and he's doing other things, it’s still run the exact same way, and that's all from him and what he puts into it and his passion he has for racing and for winning.”

Jeff Gordon, driver of the No. 24 Drive to End Hunger Chevrolet SS
Qualified: First.
Most recently: Gordon began the 500-mile event at Atlanta Motor Speedway from the fifth position and came home with a sixth-place finish. With the result, Gordon now ranks 11th in the championship standings and trails 10th-place Kurt Busch by six points with one race remaining until the cutoff for the Chase for the NASCAR Sprint Cup. Gordon can clinch a spot in the Chase no matter what happens with anyone else in the championship standings by earning a victory this weekend in Richmond.
At Richmond: In 41 starts at Richmond, Gordon has scored two wins, five pole positions, 16 top-five finishes, 25 top-10s and has led 1,415 laps. Gordon finished second in this event last season, a result that propelled him into the 2012 Chase for the NASCAR Sprint Cup. He most recently visited Victory Lane at the .75-mile short track on Sept. 9, 2000, after starting from the 13th position and leading 15 laps.
Gordon (On Richmond.): "Winning is our goal this weekend - it's what we want to do every weekend. Through practice, during qualifying and during the race, we're doing everything we possibly can to win. I've said all along that I think [Chase berths] will come down to the last lap at Richmond, and we're going to battle all the way to that checkered flag to try and earn one of those spots."

Jimmie Johnson, driver of the No. 48 Kobalt Tools Chevrolet SS
Qualified: 10th.
Most recently: Johnson rolled off from the 10th position for the Sept.1 event at Atlanta Motor Speedway and came home with a 28th-place finish. Johnson now holds a 28-point lead over second-place Clint Bowyer in the championship standings with one race remaining before the Chase for the NASCAR Sprint Cup begins. Johnson’s four victories to date will seed him second in the championship standings when the points are reset at the completion of Saturday night’s race.
At Richmond: In 23 Cup starts in Richmond, Johnson has earned three wins, five top-five finishes, 8 top-10s and has led 417 laps. Among active, full-time drivers, Johnson ranks tied for second in wins at the .75-mile short track with three. On Friday, Johnson and his wife Chandra welcomed the birth of their second daughter, Lydia Norriss Johnson. Regan Smith filled in as the replacement driver during Friday’s practice and qualifying sessions.
Johnson (On Richmond.): “We obviously would like to have a good run at Richmond this weekend. We’ve been a little streaky there but we had a good test with the rest of the Hendrick teams a couple of weeks ago. But honestly, the only thing that will help us with the Chase is a win. We are obviously leading the points but all that goes away and we won’t be leading once we get out of Richmond unless we win. Every point counts and we’d like to have this Lowe’s team start the Chase as the top seed, but doing that means we have to win this weekend.”

Dale Earnhardt Jr., driver of the No. 88 Time Warner Cable Chevrolet SS
Qualified: 14th.
Most recently: Earnhardt earned his 14th top-10 finish of the season after taking eighth at Atlanta Motor Speedway on Sept. 1. He ranks seventh in the driver standings and leads the 11th-place driver by 37 points with one race remaining until the Chase field is set. Earnhardt will clinch a top-10 Chase spot this weekend if he achieves one of the following: a finish of 32nd or better; a finish of 33rd with at least one lap led; or a finish of 34th with the most laps led.
At Richmond: In 28 NASCAR Sprint Cup Series starts at Richmond, Earnhardt has recorded three wins, one pole position, nine top-five finishes and 12 top-10s. He has led a total of 494 laps and completed 99.1 percent of all laps he's attempted at the short track (11,113 laps of 11,209 total). Among active, full-time drivers, Earnhardt’s three victories rank him tied for second at the .75-mile short track.
Earnhardt (On Richmond.): “It will be good to go to Richmond with a really nice cushion on the guys behind us. We tested at Richmond so hopefully that’s going to pay off for us. I’m ready to make the Chase and get to Chicago.”