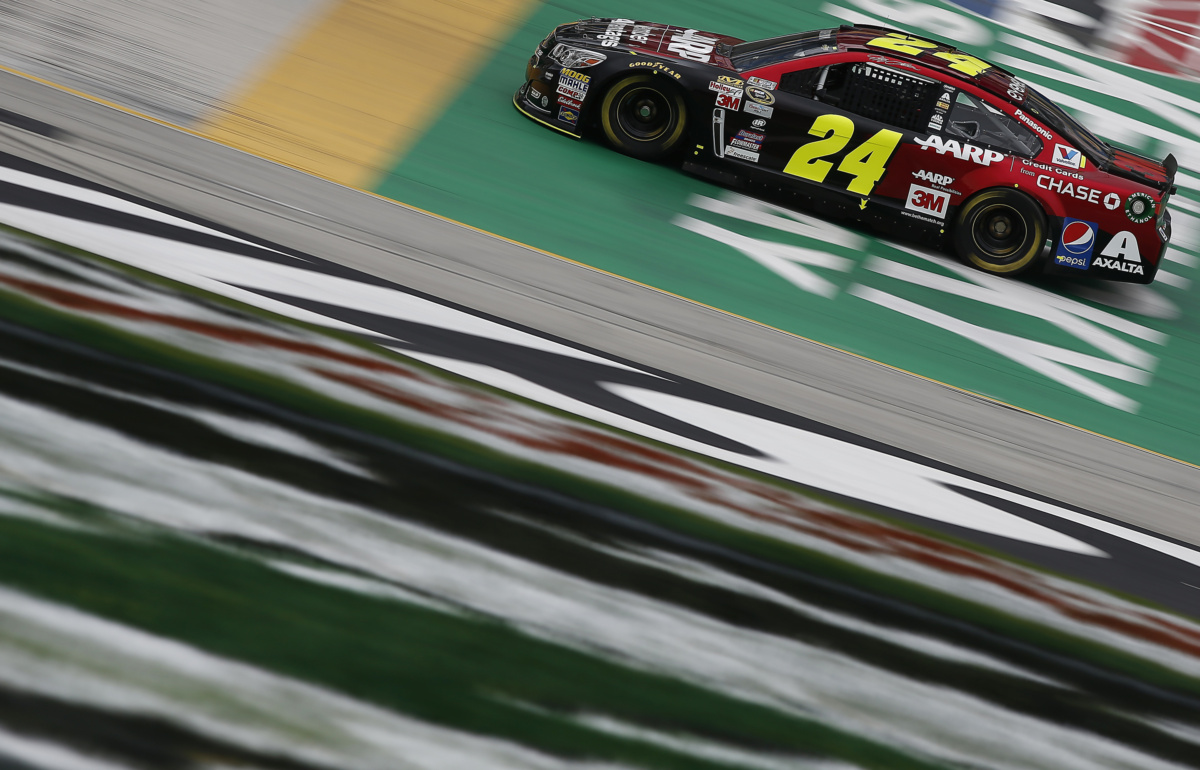 SPARTA, Ky. – Jeff Gordon led his teammates to the checkered flag during his last race at Kentucky Speedway.

He crossed the finish line with a hard-fought seventh place, leaving him with a top-10 finish in all five races at Kentucky. Next in line was teammate Jimmie Johnson finishing ninth.

After brake issues caused Dale Earnhardt Jr. to make many trips down pit road throughout the race, he ultimately raced his way to a 21st-place finish.

Below is a look at how the four Hendrick Motorsports drivers fared throughout the race at Kentucky.

KASEY KAHNE, NO. 5 LIFTMASTER CHEVROLET SS
FINISHED: 27th
STANDINGS: 12th
RECAP: Driving the No. 5 LiftMaster Chevrolet SS, Kasey Kahne began Saturday night’s race 20th. After a competition caution on Lap 30, Kahne restarted 29th, but quickly moved his way back inside the top 20 by Lap 39.On Lap 70, he cracked the top 15 for the first time of the night. When the fourth caution came out on Lap 99, Kahne made a stop on pit road for four tires, fuel and adjustments and restarted the race 13th. On Lap 130, he had raced his way into the top 10. Kahne did not make a trip down pit road during the next two cautions of the race and continued to run in the seventh position through Lap 143. After the eighth caution was thrown on Lap 152, Kahne pitted for four tires, fuel and adjustments and restarted 13th. He continued to maintain his position and was 12th with 50 laps to go. After some hard-fought last laps, Kahne finished the race in the 27th position.

JEFF GORDON, AARP MEMBER ADVANTAGES CHEVROLET SS
FINISHED: Seventh
STANDINGS: 10th
RECAP: Jeff Gordon rolled off the grid third at Kentucky Speedway and took over the second position in the first lap. During the competition caution on Lap 30, Gordon brought his No. 24 AARP Member Advantages Chevrolet SS onto pit road for two tires, fuel and adjustments before restarting fifth. He soon started to slip through the pack, but raced his way back into the top 10 on Lap 95. Halfway through the race, the sixth caution came out and the No. 24 team decided to not make a stop on pit road to restart 11th. When the seventh caution flag was thrown on Lap 143, Gordon pitted for four tires, fuel and adjustments and restarted ninth. He then started to maintain a top-10 position and with 100 laps to go he was running sixth. Gordon continued to run in the top 10 and was eighth with 50 laps to go. He ultimately crossed the finish line seventh for his last race at Kentucky Speedway.

JIMMIE JOHNSON, LOWE’S PROSERVICES CHEVROLET SS
FINISHED: Ninth
STANDINGS: Second
RECAP: Jimmie Johnson made a sixth-place start in his No. 48 Lowe’s ProServices Chevrolet SS and gained two positions within the first lap. After the competition caution on Lap 30, he remained inside the top 10. On Lap 60, Johnson slipped out of the top 10 for the first time of the race. When the third caution of the night came out on Lap 80, he made two stops on pit road for major adjustments before restarting 24th. By Lap 120, Johnson was back into the top 20, running 19th. He continued to race his way through the field and after deciding to not pit during the eighth caution on Lap 152, he restarted back in the top 10 in the seventh position. With 100 laps to go, Johnson was still running in seventh, right behind teammate Gordon. He continued to race inside the top 10 with 50 laps to go. When the checkered flag waved, Johnson finished ninth.

DALE EARNHARDT JR., NATIONWIDE CHEVROLET SS
FINISHED: 21st
STANDINGS: Fourth
RECAP: Dale Earnhardt Jr. started his No. 88 Nationwide Chevrolet SS 10th for Saturday night’s race. When the first caution came out on Lap 20, Earnhardt made a stop on pit road for adjustments. When the competition caution came out on Lap 30, he made another stop for adjustments before restarting 30th. By Lap 39, Earnhardt had already cracked the top 20 once again, and was up to 15th on Lap 62. When the fourth caution of the race came out on Lap 99, the No.88 team decided to stay out and Earnhardt restarted seventh. On Lap 135, he was involved in an incident that brought out the sixth caution and after going down pit road to assess the damage and alleviate braking issues, Earnhardt restarted 36th. He continued to race his No. 88 Nationwide Chevrolet SS through the field and with 100 laps to go Earnhardt was running 26th. He made up a few more positions to ultimately finish the race 21st.