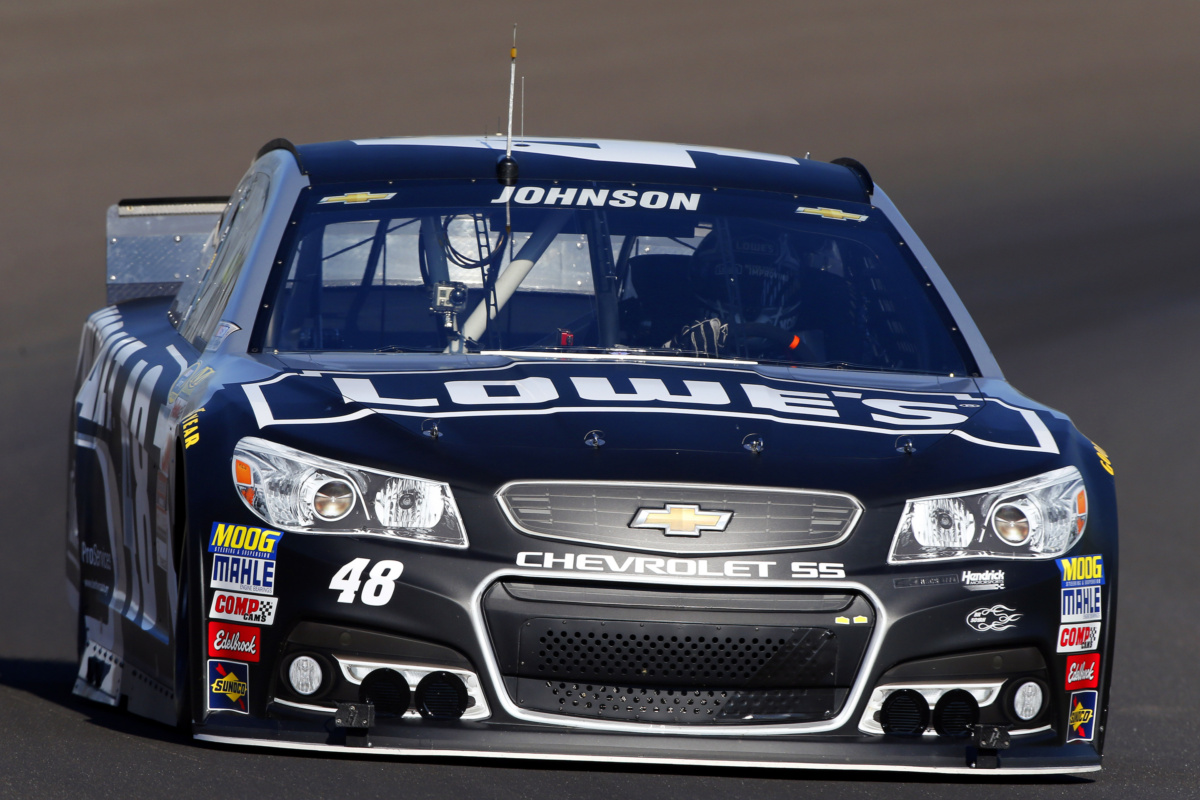 Through it all, Jimmie Johnson was able to take home a top-15 finish, taking the checkered flag in 15th.

Just behind him was Chase Elliott, who earned his third top-20 result in his fourth career Sprint Cup Series start, finishing 18th.

Dale Earnhardt Jr., who was involved in a late-race incident but was able to stay on the lead lap, finished 22nd. Kasey Kahne was the next of the Hendrick Motorsports teammates to cross the finish line in 24th.

Jeff Gordon, competing in his final Brickyard 400, was caught up in an incident on Lap 50 and ultimately finished 42nd.

“It’s unfortunate for our 3M Chevrolet,” Gordon said. “It’s not the way we want our day to go here. We didn’t start out fantastic, but we really made some gains on the first pit stop. I feel like we were going to continue to make gains and work our way to the front. But we’ll never know now.”

For a detailed look at how the race played out for all five Hendrick Motorsports drivers, see below.

KASEY KAHNE, NO. 5 FARMERS INSURANCE CHEVROLET SS
FINISHED: 24th
STANDINGS: 14th
RECAP: A 27th-place start for Kahne left him battling for position in traffic early in the race, but he found his way into the top 20 by Lap 26. After the first cycle of green-flag pit stops, Kahne was racing 17th on Lap 33. But on a restart on Lap 50, Kahne received some damage on the left side of the No. 5 Farmers Insurance Chevrolet SS when a competitor spun out in front of him and teammate Gordon made contact with the wall. During the ensuing caution, Kahne headed to pit road so the No. 5 crew could repair the damage. Though he was back in 27th for the restart on Lap 55, Kahne kept working, making it all the way into the top 10 on Lap 75. On a restart at Lap 95, Kahne found himself in 11th, though after another pit stop Kahne was in 22nd on Lap 113. He stayed off of pit road during the next caution flag, setting himself up to restart fourth with 36 laps remaining. He quickly jumped to third on the restart, and with 33 laps to go he made his way to the runner-up position. He headed to pit road one lap later, however, for right-side tires, which left him in 21st with 30 laps remaining. He headed to pit road again during the next caution with 20 laps remaining, but had to head to pit road one more time as teammate Earnhardt made contact with him during a restart with 14 laps to go. Ultimately he finished 24th.

JEFF GORDON, NO. 24 3M CHEVROLET SS
FINISHED: 42nd
STANDINGS: 11th
RECAP: In his final Brickyard 400, Gordon rolled off the grid 19th. Within five laps, he was up to 16th, and found the top 15 at Lap 26. That’s where he was running for a restart on Lap 50, when a competitor spun out in front of him. The No. 24 3M Chevrolet SS made contact with the wall as he was looking to avoid the competitor, causing damage and forcing him to pit road. The No. 24 crew worked quickly to get Gordon back onto the track, but ultimately Gordon had to head to the garage for more work on the damage, leaving him in 42nd. When he ultimately returned to the track for a restart with 36 laps remaining, Gordon was in 43rd. He was able to pass one competitor to finish 42nd.

CHASE ELLIOTT, NO. 25 NAPA AUTO PARTS CHEVROLET SS
FINISHED: 18th
STANDINGS: N/A
RECAP: In his fourth career start in the Sprint Cup points race, Elliott began 28th. He continued to run inside the top 30 in the early going of the race, finding 25th on a restart on Lap 50. He proceeded to move inside the top 20, and on Lap 62 as other drivers made green-flag pit stops, Elliott raced all the way to 10th. Even after making his own green-flag pit stop, Elliott continued racing near the top 20, finding himself in 21st on Lap 100. He moved all the way to 17th with 49 laps remaining. With 30 laps to go, Elliott was back inside the top 15. Ultimately, he finished 18th – his third top-20 finish in the Sprint Cup Series this season.

JIMMIE JOHNSON, NO. 48 LOWE’S/KOBALT TOOLS CHEVROLET SS
FINISHED: 15th
STANDINGS: 4th
RECAP: Starting just outside the top 10 in 12th, Johnson cracked the top 10 for the first time on Lap 33. After a caution flag for debris, Johnson was in third for the restart on Lap 50. He made it second on Lap 55, though he fell back outside of the top 15 when he headed to pit road for a green-flag stop. But he was once again inside the top five for a restart on Lap 95 due to a decision to stay off of pit road. He lost two spots and quickly regained them to run fifth again for a restart with 49 laps to go, but fell back to ninth by Lap 113. He headed to pit road during a caution, and then with 33 laps remaining went back to pit road to top off on fuel. That left him in 24th with 30 laps remaining. He headed to pit road again with 20 laps remaining during a caution, and through multiple more cautions and a green-white-checkered finish, he took home a 15th-place result.

DALE EARNHARDT JR., NO. 88 NATIONWIDE CHEVROLET SS
FINISHED: 22nd
STANDINGS: 3rd
RECAP: Earnhardt led his Hendrick Motorsports teammates to the green flag in eighth, and he remained inside the top 10 for much of the early going of the race. After a green-flag pit stop, he relayed that he believed he had a loose wheel, and when he headed back to pit road during a caution on Lap 44, his theory was confirmed. He lined up 19th for the ensuing restart, but kept pushing back toward the top 10. He was in 13th for a restart on Lap 95 before briefly falling outside of the top 20 after a pit stop on a Lap 107 caution. He bounced back to move into 18th with 28 laps to go after heading to pit road during a caution. He headed to pit road again on the next caution with 20 laps remaining, and on the restart with 14 laps to go, he made contact with teammate Kahne and spun toward the wall. He was able to stay on the lead lap after pitting during the ensuing caution, and finished 22nd.