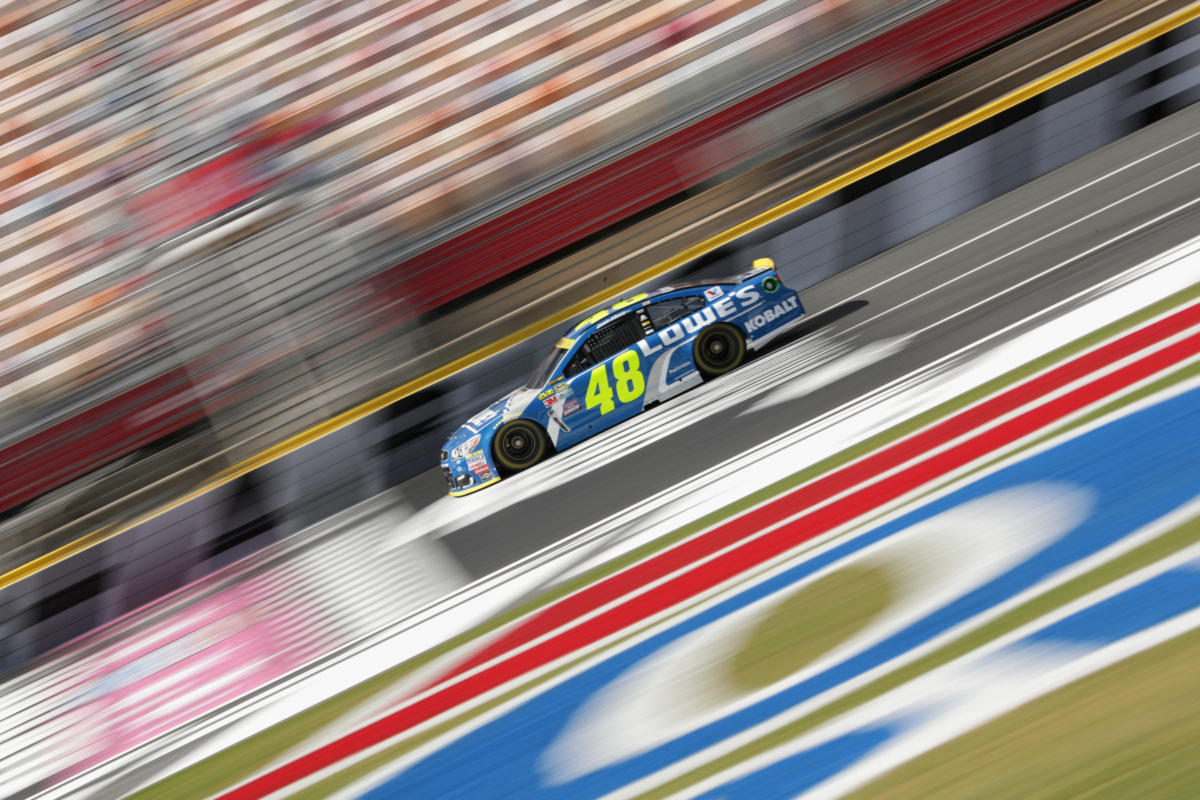 CONCORD, N.C. – Sunday at Charlotte Motor Speedway, Jimmie Johnson found Victory Lane – and advanced in the Chase in the process.

The Bank of America 500 win gave Johnson his third victory of the season – his first since March in Fontana, California – and, most importantly, secured his spot in the Round of 8 in the Chase for the NASCAR Sprint Cup.

"There are just so many great people that are behind us and support us to make this happen," Johnson said. "This is something really special for our team."

It will be Johnson’s first trip to the third round of the Chase since the current format was introduced in 2014.

Kasey Kahne joined him inside of the top five Sunday with a third-place finish.

Johnson’s teammate in the Chase wasn’t as fortunate.

Restarting inside the top five late in the race, Chase Elliott was involved in a multiple-car incident that forced him to the garage. After leading 103 laps, he was scored 33rd.

It made Elliott one of five Chase contenders to finish between 30th and 38th.

“Definitely this it seems like has been a troublesome day for a lot of guys,” Elliott said. “Hopefully we can just try to have another car like we had today and not make any mistakes next week.”

Alex Bowman was scored 39th after an incident on Lap 62 also ended his day prematurely.

“Blew a tire, I guess,” Bowman said. “It’s really unfortunate. I hate it for these Axalta guys.”

Below is a detailed look at how the four Hendrick Motorsports drivers fared Sunday at Charlotte.

KASEY KAHNE, NO. 5 GREAT CLIPS CHEVROLET SS
FINISHED: 3rd
STANDINGS: 17th
RECAP: Rolling off the grid 12th, Kahne battled the No. 5 Great Clips Chevrolet SS early in Sunday’s race, falling to 20th before a competition caution on Lap 25. A speedy pit stop by the No. 5 team allowed him to restart 13th, however, and he continued to work inside the top 15. Following the second caution of the race, Kahne found the top 10 on Lap 107. After making a green-flag pit stop for four tires and fuel, a caution flag waved, leaving Kahne stuck a lap down. He took a wave-around during the caution, however, and restarted 14th on the lad lap. He found the top 10 once again on Lap 149 and began chasing down the top five. On Lap 200, he fell just outside of the top 10, and after a cycle of green-flag pit stops he found himself in 13th. After two more cautions, Kahne restarted ninth and was able to maneuver through a multiple-car incident that caused a red flag to be displayed. Kahne continued to run inside of the top 10 when the race went green once again, and when one final caution flag waved with 26 laps to go, a quick pit stop by the No. 5 team allowed Kahne to restart fifth. He jumped to fourth on the restart with 18 laps remaining, and with less than five laps to go he jumped up to third, holding on for the top-five result.

CHASE ELLIOTT, NO. 24 3M CHEVROLET SS
FINISHED: 33rd
STANDINGS: 10th
RECAP: Elliott began Sunday’s race third, jumping to second when the green flag dropped. On Lap 12, he took the lead for the first time, and thanks to a quick pit stop by the No. 24 team during a competition caution, he held it for the ensuing restart. He headed to pit road for a green-flag pit stop from the lead, but when a caution flag waved in the middle of a cycle, Elliott found himself trapped a lap down. He took a wave-around during the caution and was able to restart ninth on the lead lap. He found the top five once again on Lap 149, and moved all the way up to second on Lap 182 – behind teammate Johnson. That is where he remained through a cycle of green-flag pit stops and a caution for debris, but he fell to third on the ensuing restart. With 82 laps to go, Elliott raced back up to second just before a caution flag flew. On pit road, he fell to fifth – though one of the competitors ahead of him took just two tires. He lined up fifth for the restart, and was involved in a multiple-car incident that caused a red flag to be displayed. The damage forced Elliott to the garage and ended his race. On a day that he led 103 laps, he was ultimately scored 33rd.

JIMMIE JOHNSON, NO. 48 LOWE’S CHEVROLET SS
FINISHED: 1st
STANDINGS: 1st
RECAP: Johnson started the Bank of America 500 just outside of the top 10 in 11th, but moved up to ninth right away when the green flag dropped. By Lap 107, he had cracked the top five, and when a caution flag flew in the middle of a cycle of green-flag pit stops, Johnson found himself with the race lead as he had not yet pitted. A quick stop by the No. 48 team allowed Johnson to maintain the lead for the restart, and though he lost it when the green flag waved, he regained it once again on Lap 176. He maintained the lead through another cycle of green-flag pit stops, a caution for debris and another caution with 82 laps to go. Thanks to another speedy stop by the No. 48 team, he held the lead on pit road for the ensuing restart, and stayed ahead of a multiple-car incident when the green flag dropped. The incident forced a red flag, and on the restart with 69 laps remaining, Johnson held onto the lead yet again. One final caution flag was displayed with 26 laps remaining, and Johnson was second in the race off pit road after taking four fresh tires. On the crucial restart with 18 laps remaining, Johnson battled to win back the lead, maintaining his position at the front of the pack for the remainder of the race en route to Victory Lane.

ALEX BOWMAN, NO. 88 AXALTA CHEVROLET SS
FINISHED: 39th
STANDINGS: 29th
RECAP: Starting the race from the outside pole, Bowman fell to fourth when the green flag waved, and that’s where he was running when a competition caution was called after Lap 25. On the ensuing restart, however, he raced back up to third. On Lap 62, a tire issue caused the No. 88 Axalta Chevrolet SS to head toward the wall – and a competitor. The damage forced Bowman to the garage and ultimately ended his day prematurely. He was scored 39th.