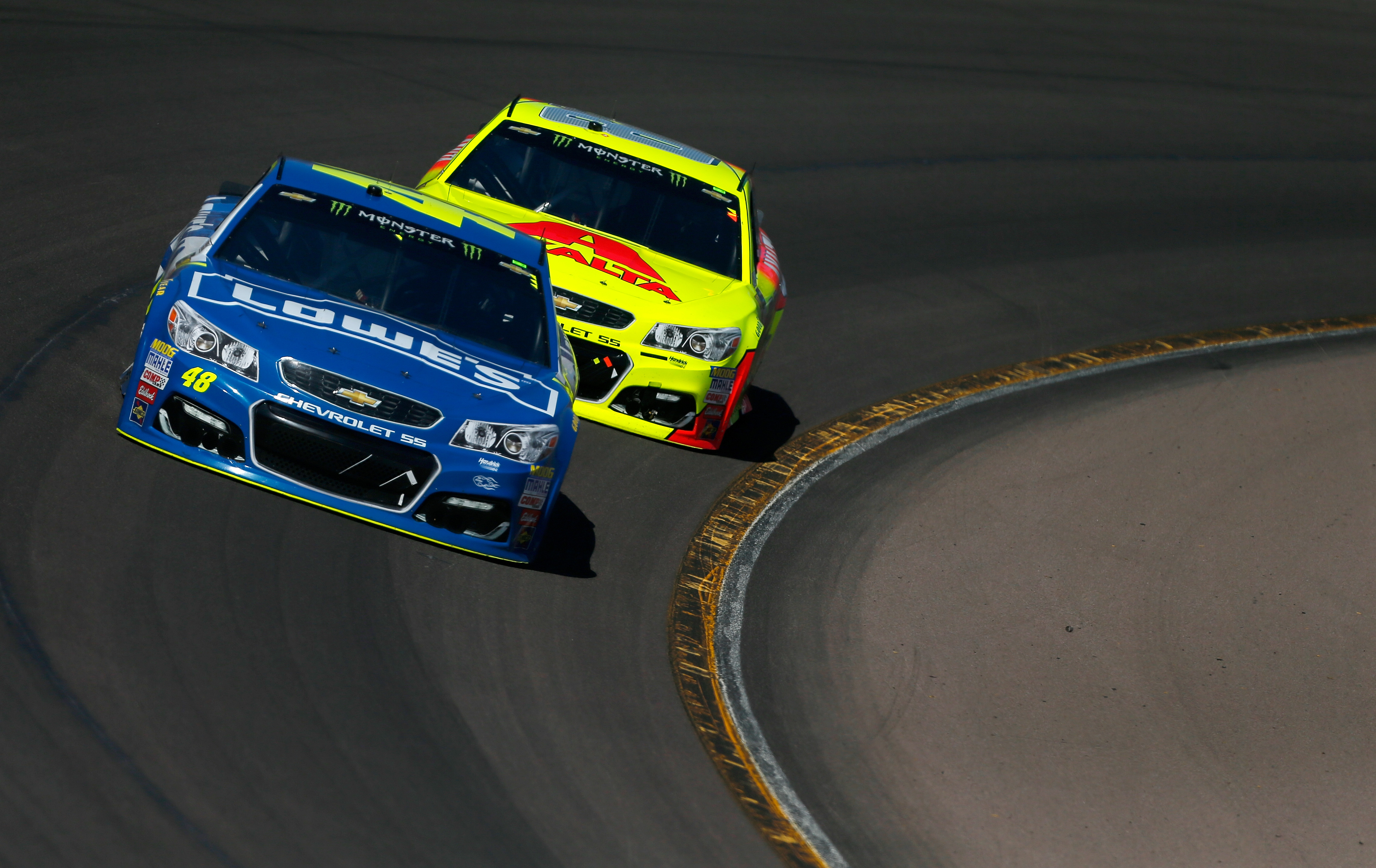 AVONDALE, Ariz. – Sunday’s race at Phoenix International Raceway went to overtime, and Jimmie Johnson drove his way to a top-10 finish – his first of the 2017 NASCAR Cup Series season.

Chase Elliott, who won Stage 2 of the race, was the next Hendrick Motorsports driver to take the checkered flag in overtime in 12th place.

Dale Earnhardt Jr. was next in 14th and Kasey Kahne rounded out the top 20 with a 20th-place finish.

Below is a closer look at how Sunday’s race played out at Phoenix International Raceway. Here, you can dive deeper into Stage 1 and Stage 2.

KASEY KAHNE, NO. 5 GREAT CLIPS CHEVROLET SS
FINISHED: 20th
RECAP: Kahne began Sunday’s race inside the top 10, and through the first two stages, he battled the handling of his No. 5 Great Clips Chevrolet SS. After finishing Stage 1 in 14th, he moved up to 11th by the end of Stage 2. He kept that progress going in the final stage, moving back inside the top 10 on Lap 181. Thanks to a speedy pit stop by the No. 5 team during a caution on Lap 191, Kahne returned to the track in eighth. He maintained his top-10 position until falling to 12th with 75 laps to go. During a caution on Lap 257, Kahne moved back into the top 10 on pit road before having to return to tighten loose lug nuts. He restarted 28th with 51 laps to go and quickly got to work. With 30 laps to go he found the top 20, and after an overtime restart he took the checkered flag in 20th.

CHASE ELLIOTT, NO. 24 NAPA AUTO PARTS CHEVROLET SS
FINISHED: 12th
RECAP: Taking the green flag in seventh, Elliott powered forward in Stage 1, finishing the segment in fourth. As the green flag waved on Stage 2, the driver of the No. 24 NAPA AUTO PARTS Chevrolet SS passed two competitors in three-wide racing to take the lead, holding on to win the stage. He held off competitors once again on the restart to start the final stage, though he fell to second on pit road during a caution on Lap 191. On the ensuing restart, the new leader selected the preferred outside lane and Elliott fell to third before another caution flag waved. On the next restart, starting on the inside once again, he dropped back to fifth but held on to maintain his top-five position. Running sixth with 40 laps to go, Elliott was passed by teammate Johnson to settle into seventh. When three cars stayed out on the track as the rest of the field headed to pit road, Elliott lined up ninth for an overtime restart. He found himself in the inside lane behind two cars on older tires and he ultimately took the checkered flag 12th.

JIMMIE JOHNSON, NO. 48 LOWE’S CHEVROLET SS
FINISHED: 9th
RECAP: Rolling off the grid 14th, Johnson found the top 10 by the green checkered flag at the end of Stage 1, and at the close of Stage 2 he had moved inside the top five in fourth. When a caution flag flew on Lap 191, Johnson was in sixth, but he quickly jumped back inside the top five with 110 laps to go. Another quick caution flag flew and Johnson fell back to just outside the top five on the ensuing restart, but continued to battle in sixth. He maintained his top-10 position throughout the next portion of the race, passing teammate Elliott with 40 laps to go to move back into sixth. When three cars stayed out on the track as the rest of the field headed to pit road, Johnson lined up seventh for an overtime restart. He found himself in the inside lane behind two cars on older tires but maneuvered his way to a top-10 finish in ninth.

DALE EARNHARDT JR., NO. 88 AXALTA CHEVROLET SS
FINISHED: 14th
RECAP: Starting Sunday’s race from third, Earnhardt rounded out the top 10 at the end of Stage 1. He began to battle the handling of No. 88 Axalta Chevrolet SS more often in Stage 2, and finished the second segment in 13th. When a caution flag flew on Lap 191, Earnhardt headed to pit road for four tires, fuel and a chassis adjustment, returning to the track in 17th. With less than 100 laps to go, Earnhardt continued to battle in 17th, attempting to work his way forward. With less than 50 laps remaining he reported over the radio that he had nearly lost his brakes, but he held on to his 15th-place position. The race featured an overtime, green-white-checkered flag restart, and Earnhardt drove his way to a 14th-place result.