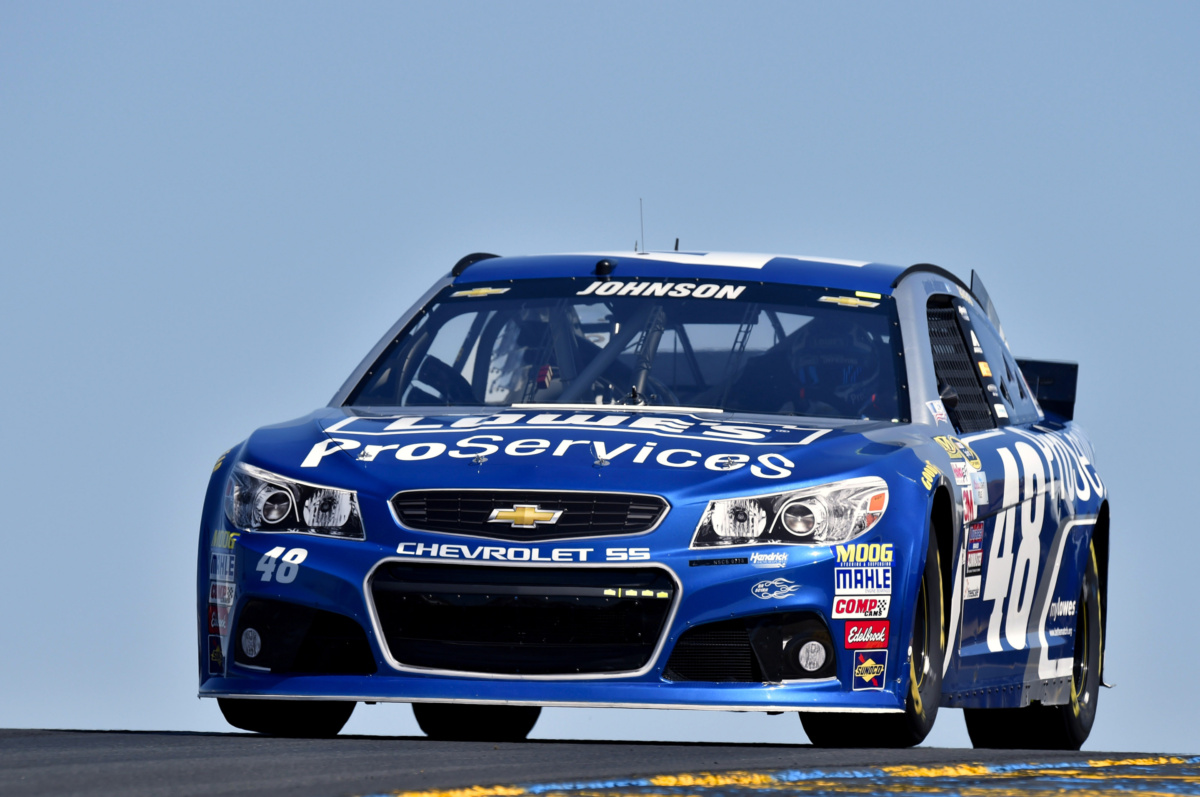 “I felt pretty good about things, and then after about a lap-and-a-half, I wasn’t feeling so good about things – they were there quickly,” Johnson said of the final restart with seven laps remaining. “But if we came back tomorrow, we’d still run the same strategy. We played it perfectly. We were one caution away from it working out just right. The situation we’re in with wins and locked into the Chase (for the NASCAR Sprint Cup), we wanted to come out and be aggressive with our strategy and we did that today in the Lowe’s ProServices Chevrolet.”

"We had to make some big adjustments and lose some track position, but the car was really, really good there at the end," Gordon said. "It was a great weekend. Nothing's going to take away from this weekend for me. I know it wasn't the finish we all wanted, but it was a very memorable weekend."

Kyle Busch took home the checkered flag as the victor.

See below for how all four Hendrick Motorsports drivers fared on the road course.

KASEY KAHNE, NO. 5 GREAT CLIPS CHEVROLET SS
FINISHED: 8th
STANDINGS: 8th
RECAP: Kahne started Sunday’s race from the 26th position, but didn’t stay back in the pack for long. He began gaining ground just a lap into the event, moving into the top 20 by Lap 6. That began the top 15 on Lap 13, and by the first caution of the race on Lap 22, he was all the way up to 13th before heading to pit road. He found the top 10 on Lap 49, moving all the way to eighth – at which point all four Hendrick Motorsports teammates were in the top eight. He was up to sixth before a green-flag pit stop on Lap 54, and as the field cycled through, he was all the way to third on Lap 68. When the third caution of the day was thrown on Lap 74, Kahne headed to pit road and was the second car to make it back to the track, but some competitors remained on the track. He was in 14th for the restart, and after another caution shortly thereafter, he kept working and found the top 10 once again with 22 laps remaining. After another trip to pit road during a caution with 12 laps remaining, Kahne lined up 12th for the restart with seven laps remaining. He fought back into the top 10 and finished eighth.

JEFF GORDON, NO. 24 AARP MEMBER ADVANTAGES CHEVROLET SS
FINISHED: 16th
STANDINGS: 11th
RECAP: Beginning his final Sonoma race in the top five, Gordon moved into fourth on Lap 4, and found his way to third just four laps later. That’s where he remained when the first caution flag of the day came out on Lap 22. While he headed to pit road, a handful of competitors stayed on the track due to varying race strategies, so he restarted 11th. Another caution – and ultimately a red flag – was thrown shortly thereafter, and when the green flag waved once again he was in 10th. He found the top five once again on Lap 39, but began battling the handling of the No. 24 AARP Member Advantages Chevrolet SS. He hit pit road for a green-flag stop on Lap 52, and continued to fight his way back up the pack as other competitors made their way to pit road. On Lap 68 he was back inside the top 15, and he found 10th place just before the third caution of the day on Lap 74. He visited pit road for a planned, extended stop to get the setup of the No. 24 similar to that of the No. 48 and No. 88, but the long stop and a pit-road penalty for throwing equipment over the wall sent Gordon to the back of the pack. He battled back inside the top 20 with 15 laps remaining. When a caution flag waved with 12 laps to go, the No. 24 team made the decision to keep Gordon on the track, so he moved all the way up to third for the restart with seven laps remaining. Cars with faster tires were able to catch and pass Gordon, and the driver of the No. 24 Chevy SS ultimately finished 16th.

JIMMIE JOHNSON, NO. 48 LOWE’S PROSERVICES CHEVROLET SS
FINISHED: 6th
STANDINGS: 4th
RECAP: A 13th-place start for Johnson didn’t last long. He was inside the top 10 on Lap 9, and raced all the way up to fourth just behind Gordon when the first caution flag of the day waved on Lap 22. He headed to pit road, but a handful of competitors remained on the track due to varying race strategies, so Johnson restarted 12th. Another caution – and ultimately a red flag – was thrown shortly thereafter, and when the green flag waved once again he was in seventh. He made it all the way up to second on Lap 52, and when the leader visited pit road, he took over the top spot. He led 14 laps before finally heading to pit road for his green-flag stop on Lap 67. When he returned to the track, he settled into fourth place behind teammates Earnhardt in second and Kahne in third. When the third caution of the day came out on Lap 74, all three of Johnson’s teammates headed to pit road while he stayed on the track to retake the lead. On the restart, No. 48 team crew chief Chad Knaus informed Johnson that he was approximately one lap shy on fuel. Another caution flag with 12 lap remaining saw Johnson stay on the track, so nearly all of the leaders behind him headed to pit road for fresher tires. Johnson maintained the lead until there were just five laps remaining, when cars on fresher tires caught and passed the leader. He held on for a sixth-place result.

DALE EARNHARDT JR., NO. 88 MICROSOFT CHEVROLET SS
FINISHED: 7th
STANDINGS: 5th
RECAP: Earnhardt rolled off the grid 20th, but like his teammates, quickly got to work moving through the pack. He continued to gain ground until he found the top 10 on Lap 18. After two cautions – one of which brought out a red flag – Earnhardt restarted 12th on Lap 34 having headed to pit road already with a number of drivers ahead of him utilizing different pit strategies. He found the top five on Lap 50 just before he headed to pit road for a green-flag pit stop. As the field cycled through, Earnhardt raced all the way up to second on Lap 68. When a caution flag waved on Lap 74, Earnhardt hit pit road and since some competitors remained on the track, he lined up 13th for the restart. He kept battling up to sixth, falling back to seventh just before a caution flag with 12 laps to go. He headed to pit road once again and lined up 13th on fresh tires for the restart with seven laps remaining. He raced his way back into the top 10 and ultimately finished seventh.