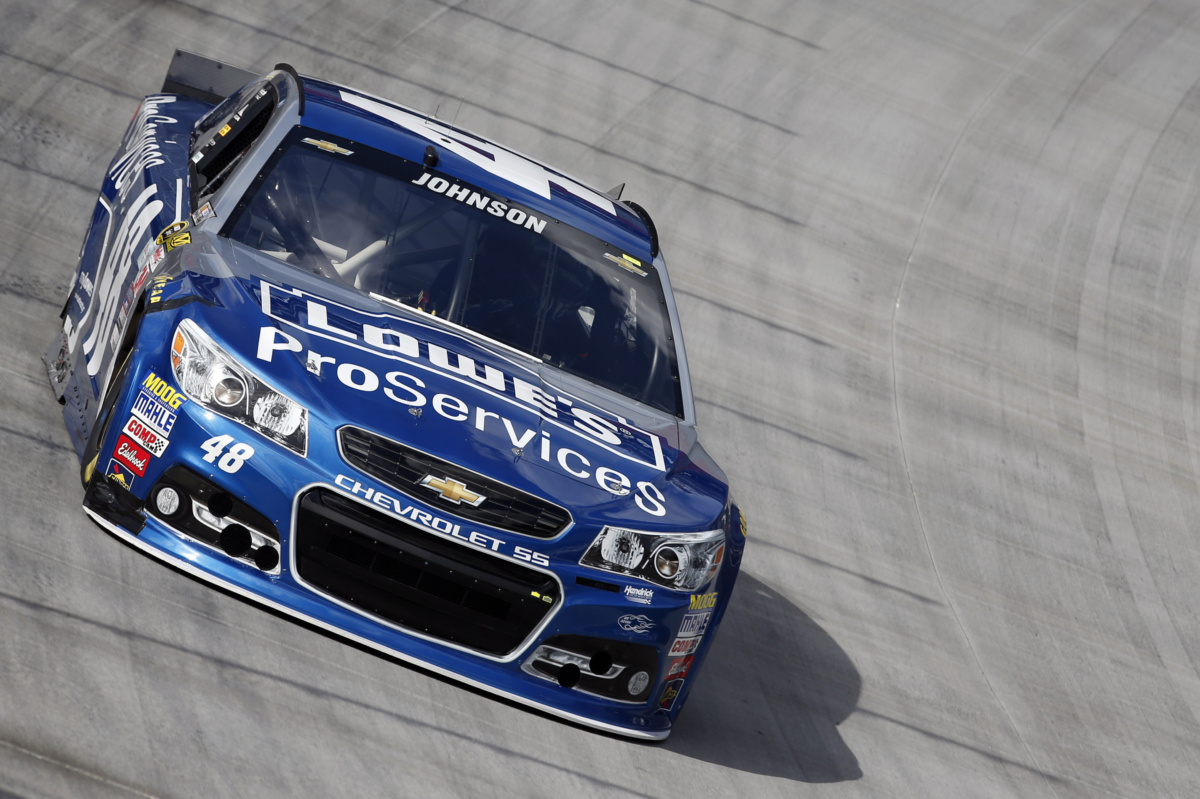 BRISTOL, Tenn. – Jimmie Johnson led his teammates to the checkered flag, finishing fourth under the lights at Bristol Motor Speedway.

Behind him was Kasey Kahne, finishing 16th.

Below is a look at how all four Hendrick Motorsports drivers performed during Saturday night’s race.

KASEY KAHNE, NO. 5 GREAT CLIPS CHEVROLET SS
FINISHED: 16th
STANDINGS: 17th
RECAP: Rolling off the grid 19th, Kahne maintained his top-20 position for the first 50 laps. After the first caution came out on Lap 52, Kahne brought his No. 5 Great Clips Chevrolet SS down pit road and restarted on Lap 58 in the 18th position. On Lap 100 Kahne was still keeping his position. The second caution of the race came out on Lap 126 and after making a pit stop, Kahne restarted 19th. He entered the top 15 on Lap 154, but started to get lost in the crowd, losing a few positions. On Lap 215 he was passed by the leader and went a lap down while running 22nd. Kahne raced his way back into the top 20 on Lap 274. He reported over his radio a vibration in his car on Lap 325 while running 18th. When the fifth caution flag waved on Lap 358, Kahne came down pit road for four tires and restarted 17th. When the checkered flag waved, Kahne crossed the finish line 16th.

JEFF GORDON, NO. 24 AXALTA CHEVROLET SS
FINISHED: 20th
STANDINGS: 13th
RECAP: Gordon began his final race at Bristol from the 24th position. From there he started to race his way through the field and was up to 18th by Lap 50. During the first caution, Gordon made a pit stop and restarted his No. 24 Axalta Chevrolet SS 17th on Lap 58.He continued to maintain his top-20 position and entered the top 15 on Lap 125. After the third caution of the race came out on Lap 147, Gordon restarted 20th but made his way up to 15th on Lap 175. After consistently racing his way through the field, Gordon and his iconic rainbow paint scheme cracked the top 10 for the first time on Lap 270. Lap by lap he continued to work his way up and was inside the top five by Lap 367. The seventh caution of the night came out on Lap 385 and Gordon was able to restart from the second position. On Lap 406 he reported a vibration that led him to make a green-flag pit stop for four tires and he returned to the track two laps down in 19th. Gordon continued to have trouble with a loose wheel and had to make another trip down pit road under the green flag on Lap 475. He eventually finished the race 20th.

JIMMIE JOHNSON, NO. 48 LOWE’S PROSERVICES CHEVROLET SS
FINISHED: Fourth
STANDINGS: Fifth
RECAP: Johnson started the race Saturday night leading his teammates in the 10th position. On Lap 18 he got caught in the middle of three-wide racing and was shuffled back to 13th. During the first caution on Lap 52, Johnson brought his No. 48 Lowe’s ProServices Chevrolet SS onto pit road for four tires, fuel and an adjustment. He returned to the track in 14th on Lap 58. Johnson made his way up to 11th and maintained that position through the next two cautions until he lost a few positions to 14th on Lap 215. He continued to slowly pick up positions and on Lap 344 he re-entered the top 10. Johnson dominated the next laps and one-by-one he made it into the top three after the sixth caution came out on Lap 370. He lost a few spots on the next restart, but was back up in the top five with 63 laps to go. Johnson crossed the finish line fourth.

DALE EARNHARDT, NO. 88 NATIONWIDE CHEVROLET SS
FINISHED: Ninth
STANDINGS: Third
RECAP: A top-20 starting position for Earnhardt left him inside the top 20 until the first caution flag waved on Lap 52. After having to make a second trip down pit road to check lug nuts, he restarted 35th on Lap 58. Earnhardt started to make his way through the field and was up to 30th on Lap 100. During the second caution on Lap 126, the No. 88 Nationwide Chevrolet SS stayed out to restart 21st. On Lap 175 he was running inside the top 20, but on Lap 240, while running 17th, he was passed by the leader, leaving him a lap down. When the fourth caution came out on Lap 250, Earnhardt got the free pass and restarted back on the lead lap. Over the next 100 laps, he slowly worked his way through the field and on Lap 350 was running 13th after being passed by the leader once again to be the first car a lap down. That did not last long as the fifth caution flag flew on Lap 358 and Earnhardt earned the free pass once again to start back on the lead lap. He started to gain spots on the track and after the seventh caution flag waved, Earnhardt restarted from the sixth position on Lap 390. With 108 laps to go he was up to third, but after the eighth caution he restarted sixth on Lap 437. He ultimately finished the race ninth.