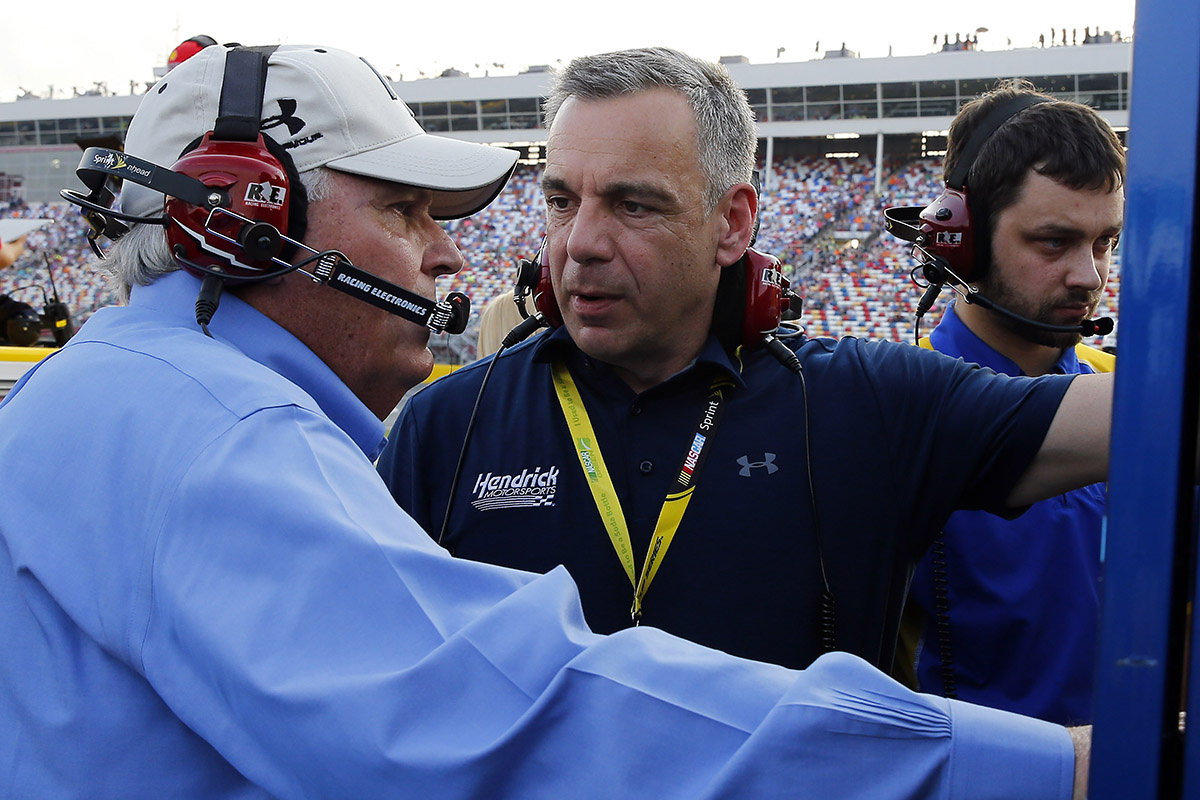 Below, longtime Hendrick Motorsports team members share their memories of working with owner Rick Hendrick through the years.

“One of the most amazing things about Mr. Hendrick is the passion that he has for this company and for racing, it’s just unprecedented. It does us all a lot of good, obviously, to see him at the racetrack. Every time we’ve been fortunate enough to go to Homestead and be in the battle for a championship he’s always been there with us arm-in-arm into battle, just as nervous as the rest of us. He doesn’t want to lead on that way but we all know he is. We broke up that nervousness and the mood a little bit going down to Homestead in 2013. From our perspective, we had had some issues earlier in the Chase with some valve spring failures and in true Mr. Hendrick fashion, just to lighten the mood up, before the race he said if we win this thing, he said ‘I want a valve spring to wear around my neck as a necklace post-race.’ I thought he was kidding but it wasn’t a minute after that race was over and he looked at me and he said, ‘Where’s my spring?’ And I didn’t have it, so I had to run back to the hauler and take a couple zipties together and put a valve spring on the zipties. He wore that the rest of the night, on stage, press conference. Everybody asked him what it was about and I remember him replying that there were a few people that knew what it was about. But we all knew it was his way of sharing with us that he was just as worried about those springs as we were.”

“My memories of Mr. H are all around how he truly loves and supports everyone around him, whether that’s through the businesses or the NASCAR teams or other friendships. Time and time again he puts himself out to help people, often times when they really are in a bad place or really could use a helping hand and he doesn’t ever want any credit for it. The stories are literally countless of how many times he has reached out to help others in a time of need.”

“In general, I remember those interactions that he and I had as we began to build a friendship and a trust and an enjoyment of working together. I look back at those times as fond memories that ended up fostering me coming down here to join the organization in ’05.”

“My dad (Randy Dorton) had a company called Competition Engines back in 1983 and he had it until about 1984 and then Mr. H bought it off of him. Rick came to him first and said, ‘Hey, I’m thinking about going into NASCAR. If I go, would you like to go with me?’ And he said, ‘Well, let me go home and think about it.’ So he thought about it and he came back and said, ‘Alright, I’ll go in with you.’ So Rick started this company, they went to Martinsville, Rick was at church, and Rick told them, ‘Here’s the plan, I’ve got this guy, Geoff Bodine. I’ve got this sponsor, All Star Racing. If Geoff Bodine wins the race, we’ll start us a deal. If he doesn’t, then you guys are on your own and I’m going to go do my own thing.’ So, they went to Martinsville, Rick was at church and Geoff won the race. He called his mama and she said, ‘Guess who won the race?’ And he said, ‘I don’t know.’ She said, ‘Geoff Bodine won the race.’ So he ran home and he kind of got it started from there.”

“Little did I know in 2008 when Mr. Hendrick asked me to step back from being a crew chief here at Hendrick Motorsports, that he had a master plan for me to become a crew chief at and kick off Stewart-Haas Racing. Being able to go there and have his support and win a championship in 2011, it really meant the world to me to have his backing all along. He was a great mentor and provider to me to do that.”

“One of my greatest memories of Mr. Hendrick and the type of person he is goes way back to 1992 when I was first hired here at Hendrick Motorsports to be on what would be Jeff Gordon’s new race team; we hadn’t even raced a season yet. Very early on after being here less than a year, I hurt my back and from out in California -- from a car phone -- Mr. Hendrick called from a business trip and spoke with me personally to see how I was doing. Here I was in racing less than a full season, at Hendrick Motorsports less than a year, and Mr. Hendrick -- with all of his business and employees all over the country -- still thought enough to call me personally and see how I was doing. That’s something that made me feel very welcome in the company, welcome in NASCAR and it made me realize that I had reached the right team, I had come to the right place and what special place Hendrick Motorsports was and is.”

“Two years ago, Mr. Hendrick came to me to talk to me about some things we could maybe do to make all of Hendrick Motorsports better and I just appreciate that from the leader of a company like he is to take the time to speak to me and really listen and care about ways that we could make Hendrick Motorsports a better place. I think that’s really rare with people in his role and I think that makes him stand out in a lot of ways. He’s so down-to-earth, I think that’s the biggest thing with me. When I’m talking to him, I feel like I’m talking to my dad, for example. I feel like I could talk to him honestly and I don’t feel like it’s a wasted conversation. I feel like if I’m talking to him about something and he knows that I’m serious about it, then I believe it’ll go somewhere.”

“I have a lot of memories of Mr. H. I think the one that stands out most for me was when my daughter was born. She was born pretty ill and at that time I was traveling with the race teams changing tires. I got home Monday from California at 6:30 a.m., we got to the doctor at 9 a.m. and she was operated on that night at 7 p.m. The next two weeks of my life were upside down but he (Hendrick) provided transportation for me back and forth to the racetrack. I think the thing that separates that most from anything was there were no questions asked about, “When are you going to do this, when are you going to do that?’ It was, ‘When you get ready, let us know.' To me, that’s the most important thing. What he carries and what he does, the average person doesn’t have a clue. When I see stuff like that, I know the man has a heart. I know he appreciates it and to me that’s the most important thing is us being humans -- we take care of one another and he’s good to his word when it comes to that.”