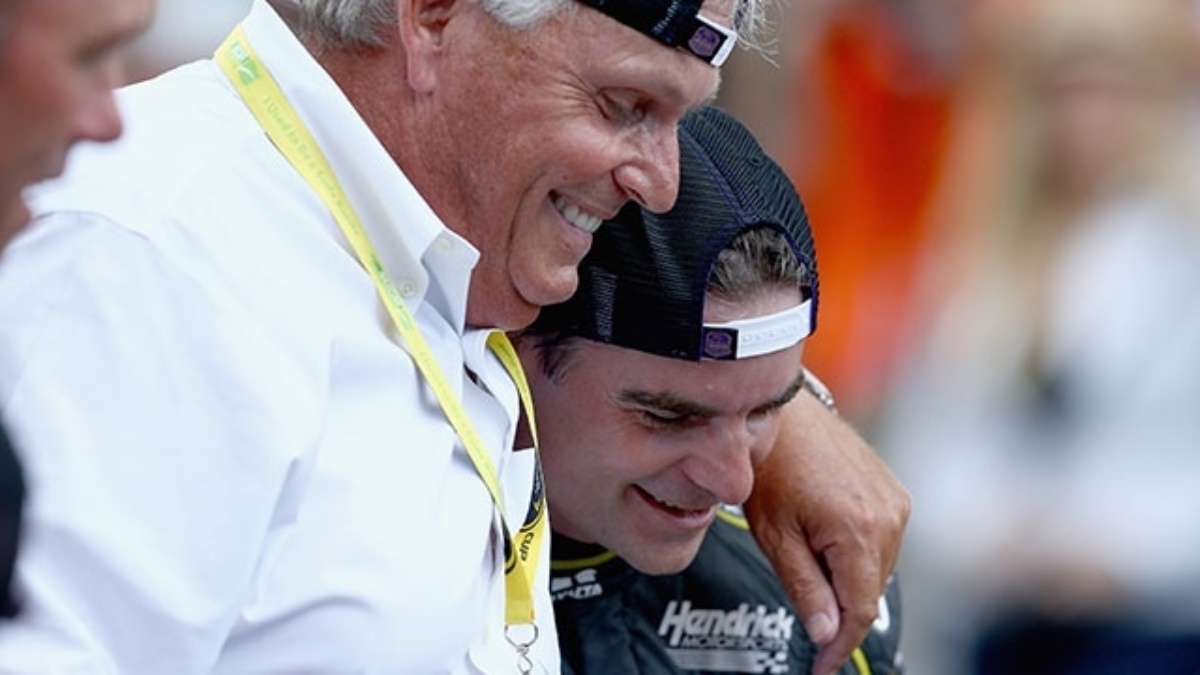 CONCORD, N.C.– Jeff Gordon, the celebrated stock car champion whose crossover appeal helped take NASCAR into the mainstream, will compete in his 23rd and final full-time Sprint Cup Series season in 2015. He announced his decision this morning to the No. 24 Hendrick Motorsports team he has driven for since November 1992.

“As a race car driver, much of what I’ve done throughout my life has been based on following my instincts and trying to make good decisions,” Gordon said. “I thought long and hard about my future this past year and during the offseason, and I’ve decided 2015 will be the last time I compete for a championship. I won’t use the ‘R-word’ because I plan to stay extremely busy in the years ahead, and there’s always the possibility I’ll compete in selected events, although I currently have no plans to do that.

“I don’t foresee a day when I’ll ever step away from racing. I’m a fan of all forms of motor sports, but particularly NASCAR. We have a tremendous product, and I’m passionate about the business and its future success. As an equity owner in Hendrick Motorsports, I’m a partner with Rick (Hendrick) and will remain heavily involved with the company for many years to come. It means so much to have the chance to continue working with the owner who took a chance on me and the incredible team that’s stood behind me every step of the way.

“Racing has provided a tremendous amount of opportunity that’s been extraordinarily rewarding and fulfilling in my life. The work we’re doing with the Jeff Gordon Children’s Foundation will continue to be extremely important to me. Outside the race car, my passion is pediatric cancer research, and my efforts will remain focused there when I’m no longer driving.

“I’ll explore opportunities for the next phase of my career, but my primary focus now and throughout 2015 will be my performance in the No. 24 Chevrolet. I’m going to pour everything I have into this season and look forward to the challenge of competing for one last championship.

“To everyone at NASCAR, my teammates, sponsors, competitors, friends, family, members of the media and especially our incredible fans, all I can say is thank you.”

One of the most versatile drivers of his era in any auto racing discipline, Gordon’s résumé includes three Daytona 500 victories and a record five Brickyard 400 wins. He is the sport’s winningest road course driver with nine victories, stands alone as the all-time leader with 12 restrictor plate wins and has won at every track on the Sprint Cup circuit with the exception of Kentucky Speedway.

“There’s simply no way to quantify Jeff’s impact,” said Hendrick, who first noticed Gordon during a race at Atlanta Motor Speedway in March 1992. “He’s one of the biggest sports stars of a generation, and his contributions to the success and growth of NASCAR are unsurpassed. There’s been no better ambassador for stock car racing and no greater representation of what a champion should be. I will never be able to properly express the respect and admiration I have for Jeff and how meaningful our relationship is to me. I’m so grateful for everything he’s done for our company and my family, and I look forward to many more years together as friends and business partners.”

Hendrick Motorsports will announce plans for its 2016 team alignment at a later date.

2014: Captured four victories, three pole positions, 14 top-five finishes and a series-leading 23 top-10s. Scored a NASCAR-record fifth Brickyard 400 win, tying Formula One driver Michael Schumacher for the most victories at Indianapolis. Posted series-best average finish (10.4) en route to a sixth-place finish in the point standings. Extended NASCAR record for most consecutive seasons with a pole (22). Starred in the viral video “Test Drive 2,” which has surpassed 17 million views on YouTube.

2013: Finished sixth in the Chase for the NASCAR Sprint Cup with one win (Martinsville), two poles, eight top-fives and 17 top-10s. Set NASCAR record for most consecutive seasons with a pole (21), breaking a tie with NASCAR Hall of Fame driver David Pearson. Starred in the viral video “Test Drive,” which has surpassed 43 million views on YouTube.

2012: Recorded two wins, two poles, 11 top-fives, 18 top-10s and finished 10th in the Chase. Scored first career Homestead-Miami victory and surpassed NASCAR Hall of Fame driver Darrell Waltrip for sixth in all-time career laps led (23,147). Recipient of the Heisman Humanitarian Award, established to recognize those in sports who give significantly to serve communities and improve the lives of others. Appeared as himself in an episode of the FOX animated television show “The Simpsons.” Returned to Rwanda for a second time in conjunction with the Jeff Gordon Children’s Foundation. Recipient of the NMPA Myers Brothers Award, which recognizes those who have made outstanding contributions to the sport of stock car racing.

2011: Began working with fourth full-time crew chief Alan Gustafson. Posted three wins, one pole, 13 top-fives and 18 top-10s en route to an eighth-place finish in the Chase. Moved to third in all-time wins after scoring his 85th career victory at Atlanta and claimed sole possession of third in all-time career poles (70). Voiced the character “Jeff Gorvette” in the animated film “Cars 2.” Traveled to Rwanda with the Jeff Gordon Children’s Foundation, and visited the Democratic Republic of Congo in conjunction with the Clinton Global Initiative.

2009: Finished third in the Chase with one win, one pole, 16 top-fives and a series-high 25 top-10s. Scored first career Texas victory. Appeared in an episode of the long-running children’s television series “Sesame Street.”

2006: Finished sixth in the Chase with two victories, two poles, 14 top-fives and 18 top-10s. Scored first career Chicagoland victory and extended own record for most road course victories (9) with fifth career win at Sonoma.

2004: Five wins, six poles, 16 top-fives and 25 top-10s. Finished third in the inaugural Chase, marking 11 consecutive top-10 point finishes. Led standings after 26th race before top-10 points were reset. Became the first stock car driver to capture four victories at Indianapolis and only the fourth driver in history to win there four times. Won back-to-back races for the 19th and 20th times in his career.

2003: Three wins, four poles, 15 top-fives, 20 top-10s and a series-leading 1,639 laps led. Won both events at Martinsville to complete a season sweep at the track. Finished fourth in the point standings. Became the only auto racing driver in the show’s history to host NBC’s “Saturday Night Live.”

2001: Achieved a fourth career championship to become at the time only the third driver to win more than three titles. Led the series in several statistical categories: wins (6), poles (6), top-fives (18), top-10s (24), races led (25) and laps led (2,320). Became the first driver to eclipse $10 million in single-season prize winnings. Won both the all-star event and the Brickyard 400.

1999: Finished the season with seven victories to become the first driver in history to win the most races for five straight years. Also won the most poles (7) and led the most laps (1,319). Finished the season sixth in points with 18 top-fives and 21 top-10s. Ran final race with original crew chief Ray Evernham at Dover on Sept. 26. Appeared on the cover of Fortune magazine. Established the Jeff Gordon Children’s Foundation, which supports pediatric cancer research, treatment and patient support programs. Became an equity owner in Hendrick Motorsports after signing a lifetime contract to drive for the team.

1997: Won second series championship with 10 victories, one pole, 22 top-fives and 23 top-10s. Became youngest driver to win the Daytona 500 in a Hendrick Motorsports 1-2-3 finish. Second driver ever to win the Winston Million.

1994: Won twice, including first career victory at Charlotte and the inaugural Brickyard 400 at Indianapolis. Achieved seven top-fives and 14 top-10s.