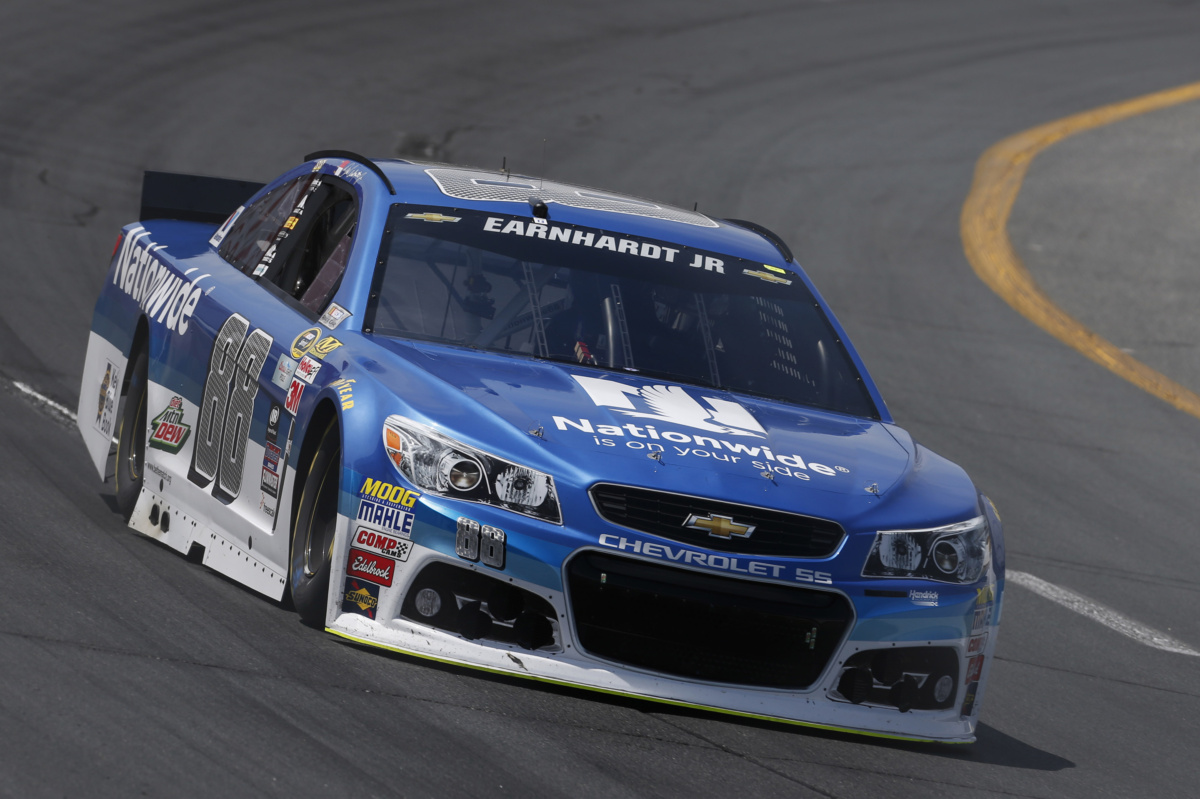 Starting 19th, Earnhardt quickly began moving through the field, and by the end of the race he took the checkered flag in fifth.

It’s his third top-five finish in the past five races.

Jeff Gordon was the next Hendrick Motorsports teammate to cross the finish line, joining Earnhardt in the top-10 with a ninth-place result. After starting 23rd, it marks Gordon’s third consecutive top-10 finish.

Below is a look at how the four Hendrick Motorsports drivers fared on Sunday.

KASEY KAHNE, NO. 5 GREAT CLIPS CHEVROLET SS
FINISHED: 19th
STANDINGS: 12th
RECAP: Starting the race from the ninth position, Kahne remained in the top 10 up to the first caution of the race on Lap 22. After heading to pit road, he took the restart in the 11th position. Though he lost position when the green flag waved, he found 11th once again on Lap 37 after passing teammate Johnson. After a green-flag pit stop and a caution flag, Kahne made his way all the way up to seventh on Lap 111. At the midway point of the race, Kahne found himself in sixth. As different pit strategies began to take shape, Kahne was running 13th for a restart on Lap 204. On a restart with 44 laps to go, the driver of the No. 5 Great Clips Chevrolet SS jumped from 19th to 17th. He would take the checkered flag in 19th.

JEFF GORDON, NO. 24 AARP MEMBER ADVANTAGES CHEVROLET SS
FINISHED: 9th
STANDINGS: 10th
RECAP: Gordon took the green flag Sunday from the 23rd position, but it took him just five laps to find the top 20. When the first caution flag of the race waved on Lap 22, Gordon had made it to 16th, and after heading to pit road he returned to the track in 15th. On Lap 55, he reached the top 10 for the first time all race, making him the second-biggest mover of the day to that point – his 13 positions gained were second only to teammate Earnhardt’s 14 at the time. After a cycle of green-flag pit stops and another caution, Gordon was once again in 10th on Lap 111. At the midway point of the race, Gordon had found ninth. He fell outside of the top 10 after a round of green-flag pit stops, but he once again made his way to 10th for a restart on Lap 204. At Lap 246, Gordon passed a competitor to reach eighth. On a restart with 44 laps to go, the driver of the No. 24 AARP Member Advantages Chevrolet SS jumped from 12th to ninth. That is where he would finish, his third consecutive top-10 result.

JIMMIE JOHNSON, NO. 48 LOWE’S CHEVROLET SS
FINISHED: 22nd
STANDINGS: 4th
RECAP: Starting seventh, Johnson remained in the top 10 up to the first caution of the day on Lap 22, when he elected to stay out on the track. On the restart, he held off cars with fresher tires for a handful of laps, but ultimately dropped to 16th on Lap 45. Johnson moved back toward the top 10 as green-flag pit stops began, ultimately heading to pit road on Lap 85. He found himself in 24th when the next caution flag of the day waved, as not all competitors had made green-flag pit stops to that point. At the midway point of the race, Johnson had moved up to 18th. During a green-flag pit stop approximately 25 laps later, Johnson was penalized for going too fast on pit road, and he was in 31st for a restart following a caution at Lap 188. But he kept working and was up to 27th on a Lap 204 restart. He ultimately crossed the finish line in 22nd.

DALE EARNHARDT JR., NO. 88 NATIONWIDE CHEVROLET SS
FINISHED: 5th
STANDINGS: 3rd
RECAP: Earnhardt rolled off the grid 19th Sunday afternoon and quickly found himself the biggest mover of the race. By the first caution on Lap 22, Earnhardt had found 15th. He restarted 14th and made it to 12th on the first green-flag lap. On Lap 34, he cracked the top 10, and that became the top five by Lap 62. As competitors began to make green-flag pit stops, Earnhardt took over the lead on Lap 89 before heading to pit road. When the next caution flag waved, not all competitors had made their way to pit road, and Earnhardt was in 12. But on the ensuing restart, Earnhardt was back inside the top five, and on Lap 111 he made it to third place. At the midway point of the race, Earnhardt was still running inside the top five, settled in to fifth place. After a green-flag pit stop, Earnhardt was outside of the top-five, but he was fourth once again for a restart following a caution at Lap 188. When another caution flag waved at Lap 200, Earnhardt headed to pit road and the No. 88 crew fixed some damage, putting him back in 24th for the ensuing restart. But just as he did at the start of the race, Earnhardt quickly began working back up the racetrack. Within less than 30 laps he had already regained 11 spots. At Lap 248, Earnhardt re-entered the top 10. On a restart with 44 laps to go, the driver of the No. 88 Nationwide Chevrolet SS jumped from eighth to seventh. With 14 laps remaining, Earnhardt made a pass to move back into the top five. He finished the race in fifth.