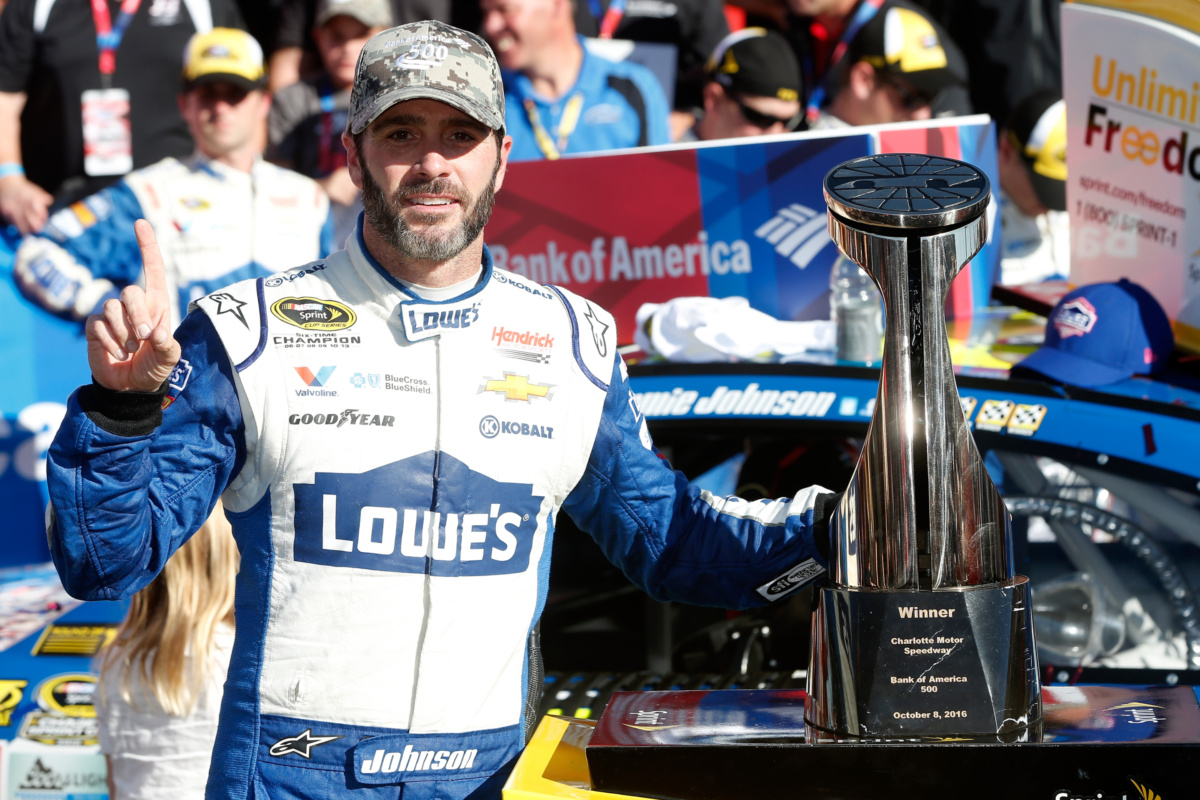 But after his March 20 win in Fontana, California, the driver went 24 races with Victory Lane eluding him.

"We don't sugarcoat things internally," Johnson said. "Behind closed doors, we're realists and we were not happy with where our cars were during the summer."

Then came the start of the Chase for the NASCAR Sprint Cup.

The No. 48 team has improved its finish in each of the four postseason races thus far, from 12th at Chicagoland Speedway all the way to first Sunday at Charlotte Motor Speedway.

“Really we just fell back on what we are made of at Hendrick Motorsports," Johnson said. "There is a culture there and a belief. It was not fun to experience after all that we have been through, but we have seen the cars get stronger, better and faster. We were able to execute all day long here."

Johnson earned his third victory of the season Sunday in the Bank of America 500, with Kasey Kahne joining him inside the top three in third.

And both Chase Elliott and Alex Bowman were running inside of the top five when multiple-car incidents took them out of the race prematurely.

"You get this machine of Hendrick Motorsports rolling and some momentum on our side, we can accomplish a lot," Johnson said. "I think all four cars are showing that, and we've got a lot more to show the rest of the year."

Johnson is now locked into the Round of 8 in the Chase for the first time since the elimination format was introduced in 2014.

"You get this machine of Hendrick Motorsports rolling and some momentum on our side, we can accomplish a lot."

"We can't sit back and celebrate too much," he said. "We've got to buckle down and get to work tomorrow and keep advancing our race cars. But this does buy us a couple weeks of freedom."

Johnson's eight wins at Charlotte are the most all-time, and his latest victory gives him 78 in his NASCAR Sprint Cup Series career.

“Not bad -- those aren’t bad numbers at all," Johnson smiled. "I was praying for one when I was a kid. Now to have 78 of these things -- that is pretty wild.”

Beyond the two remaining races in the Round of 12 -- at Kansas Speedway and Talladega Superspeedway -- the third round of the postseason begins at Martinsville Speedway followed by trips to Texas Motor Speedway and Phoenix International Raceway.

In his career, Johnson has 18 combined wins at the three tracks that comprise the Round of 8.

"Good things ahead for us," he said. "We have to take it one day at a time and one race at a time, and I still feel like we can bring better cars to the racetrack."

But after a summer that was "really hard on us," Johnson and the No. 48 team are very much alive in the race for a seventh championship.

"We're doing what we need to," Johnson said, "and that brings a lot of optimism to the team."